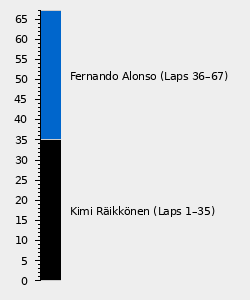 The 2005 German Grand Prix, otherwise known as the LXVII Großer Mobil 1 Preis von Deutschland, was the twelfth round of the 2005 FIA Formula One World Championship, staged at the Hockenheimring in Hockenheim, Baden-Württemberg, Germany, on 24 July 2005.[1] The race would be dominated early on by Kimi Räikkönen, although for the third time in 2005 the Finn would be robbed of an almost certain victory by a mechanical failure.[1]

Indeed, Räikkönen had been the man to beat throughout the weekend, sweeping to an imposing pole position in qualifying by 0.439s.[1] Jenson Button would secure second for BAR-Honda ahead of Championship leader Fernando Alonso, while Michael Schumacher was the best of the German drivers in fifth behind Giancarlo Fisichella.[1]

Furthermore, the Finn would ace his start when the Grand Prix got underway, blasting away from the grid unopposed.[1] Behind, it would be a typical Hockenheim start, with cars scattering across the circuit and run-off at turn one as Takuma Sato removed his front wing on Fisichella, while Mark Webber and Jarno Trulli bounced off one another.[1]

Out front, meanwhile, Räikkönen was able to escape and build an early lead, with Alonso and Schumacher having had to get around Button at the first corner.[1] Behind, Fisichella had slipped back down the field behind Nick Heidfeld, David Coulthard and Felipe Massa, while Juan Pablo Montoya had made a huge amount of ground to climb from last to eleventh over the space of the first lap.[1]

Montoya duly had a monopoly on the early entertainment, taking Rubens Barrichello and Christian Klien on successive laps, before engaging Fisichella in a duel for eighth.[1] Behind, Barrichello and Jacques Villeneuve would come to blows at the hairpin, resulting in the #11 Sauber-Petronas getting launched into the air, only for Villeneuve to recover and clash with debutante Robert Doornbos in the stadium.[1]

The race would begin to calm down after that, with the order proving fairly static until Heidfeld made his first stop on lap fifteen.[1] Yet, the leaders would stay out for several laps beyond that, with Button the first of the lead group to stop on twenty, followed two laps later by Alonso and Schumacher.[1]

Räikkönen, however, was under no concerns, and duly stopped on lap 25 without losing the lead, and would begin to ease even further up the road from Alonso's Renault.[1] Furthermore, the sister car in Montoya's hands was also running at an impressive pace, gaining a lot of ground amid the stops to jump Fisichella, Massa, Coulthard and Heidfeld.[1]

Yet, as the race ticked past half distance Räikkönen's race was set to end, a hydraulic failure ultimately causing the #9 McLaren-Mercedes to limp to a stop on lap 35.[1] The Finn walked away without turning back to his stranded car, as Alonso picked up a thirty second lead over second placed Schumacher.[1]

Indeed, with Alonso half a minute clear the race for victory was all but over, with the battle for second the main interest for the rest of the afternoon.[1] Tyre wear was proving to be a major issue for Schumacher as the second stops came and went, resulting in both Button and Montoya closing in on the #1 Ferrari.[1]

Yet, that fight would be ended when Montoya jumped both Button and Schumacher during the second stops, while Button himself would also move ahead of Schumacher.[1] The late-race entertainment then became about the German ace fending off a charging Fisichella, taking Ralf Schumacher and Coulthard with him.[1]

Out front, meanwhile, Alonso was left to claim an impressive, if fortunate, victory, well clear of second placed Montoya.[1] Button eased his BAR home to complete the podium, while a late move at the hairpin by Fisichella got the #6 Renault ahead of Schumacher's #1 Ferrari.[1] They were chased across the line by Ralf Schumacher and Coulthard, while Massa claimed a lonely eighth.[1]

Fernando Alonso had once again extended his Championship lead as the 2005 season ploughed into its second half, leaving the UK with 77 points to his name. Kimi Räikkönen had remained his closest challenger, but slipped 26 behind, while Michael Schumacher looked to be out of the fight in third, 34 off the lead. Behind, Rubens Barrichello and Jarno Trulli were level on 31, and were also drifting out of contention, while race winner Juan Pablo Montoya moved into sixth.

In the Constructors Championship Renault and McLaren-Mercedes had effectively cancelled each other out in the UK, although it was the latter duo whom had gained. Indeed, they left their home race fifteen behind the French manufacturer, and having established a similar thirteen point advantage over Ferrari in third. Elsewhere, Toyota had retained fourth ahead of Williams-BMW, while BAR-Honda moved off the foot of the table and ahead of Minardi-Cosworth.

The full entry list for the 2005 German Grand Prix is outlined below:

The full qualifying results for the 2005 German Grand Prix are outlined below:

The full results for the 2005 German Grand Prix are outlined below: