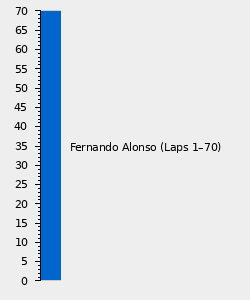 The 2005 French Grand Prix, otherwise officially known as the Formula 1 Grand Prix de France 2005, was the tenth round of the 2005 FIA Formula One World Championship, staged at the Circuit de Nevers Magny-Cours in Magny-Cours, France, on the 3 July 2005.[1] The race would be dominated by drivers using Michelin tyres, after the controversial United States Grand Prix saw all of the French shod cars withdraw.[1]

After the fallout from the US Grand Prix the F1 field reconvened in France, with the Michelin tyred section of the field assured that there would be no repercussions for their actions.[1] Fortunately there would be no issues during practice caused by tyre failures, with Michelin reported to be using a harder compound than before.[1]

Qualifying would see Fernando Alonso secure pole position, edging out Jarno Trulli in the Toyota.[1] Kimi Räikkönen claimed third but was slapped with a ten place grid penalty so would start thirteenth, while Michael Schumacher was the best Bridgestone runner, being promoted to third.[1]

The start of the race would see Alonso's Renault sprint into an early lead, while Trulli fended off the attentions of Schumacher.[1] Behind, Rubens Barrichello made ground with a move on Takuma Sato, while Räikkönen sprinted into the top ten with a strong start.[1]

Alonso would continue to build his lead in the early stages, quickly establishing a five second lead as Trulli fended off Schumacher.[1] They were joined in the lead group by Barrichello as Sato lacked their pace, while Räikkönen continued his move up the field after his grid penalty.[1]

Barrichello kick started the first pit phase when he stopped on lap fifteen, with Trulli and Schumacher stopping on the following tour.[1] Schumacher would ultimately emerge at the head of that group, while Alonso stopped on lap twenty without losing the lead.[1]

The two McLaren-Mercedes, meanwhile, would run in second and third, opting for a one-stop strategy, with Juan Pablo Montoya running ahead of Räikkönen.[1] They duly stopped and rejoined in second and third having out-paced the Schumacher group, but with Räikkönen moving ahead of Montoya by virtue of stopping three laps later.[1]

Räikkönen was hence off to chase down Alonso, although the Spaniard was able to make his second stop without losing the lead.[1] Behind, Montoya's pace collapsed when his tyres faded, before a hydraulic failure on lap 46 ended his race and let Schumacher through to third.[1]

With that the race was effectively over, with Alonso cruising through the final laps to claim victory, ten seconds clear of Räikkönen.[1] Schumacher was a distant third to complete the podium, while Jenson Button moving into fourth with a strong final stint.[1] Trulli, Giancarlo Fisichella, Ralf Schumacher and Jacques Villeneuve completed the scorers.[1]

Victory for Michael Schumacher in a sparse IMS ensured that the German ace was in title contention, having moved into third. However, he was still 25 points shy of Fernando Alonso in the lead, but was just three off of Kimi Räikkönen who had lacked the fortune of his competitors. Elsewhere, Rubens Barrichello had also made ground to move into fourth ahead of Jarno Trulli, with 21 drivers now on the board.

In the Constructors Championship it was Renault who continued to lead the away, leaving the US having not raced, but with 76 points. McLaren-Mercedes were next having also failed to race in the US, while Ferrari had moved into third, level on 63 points with the Anglo-German alliance. Behind, Williams-BMW and Toyota were still tied on 47, while Jordan-Toyota and Minardi-Cosworth had added their names to the score sheet.

The full entry list for the 2005 French Grand Prix is outlined below:

The full qualifying results for the 2005 French Grand Prix are outlined below:

The full results for the 2005 French Grand Prix are outlined below:

Fernando Alonso secured his fifth win of the season to extend his Championship lead, leaving France with 24 points in hand. Kimi Räikkönen was still his closest challenger, moving onto 45 points for the campaign, while Michael Schumacher had slipped 29 points off the lead in third. Jarno Trulli and Rubens Barrichello completed the top five, while Jenson Button had become the 22nd scorer of the campaign with his first points of the season.

In the Constructors Championship it had been another strong day for Renault, leaving France with 89 points and an increased lead. McLaren-Mercedes remained their nearest threat, slipping eighteen points behind, while Ferrari had moved closer to their Anglo-German rivals, sitting just two behind. Toyota and Williams-BMW were next, while BAR-Honda's first points of the campaign ensured all ten constructors had scored.