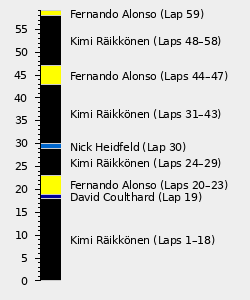 The 2005 European Grand Prix, otherwise known as the 2005 Formula 1 Grand Prix of Europe, was the seventh round of the 2005 FIA Formula One World Championship, staged at the Nürburgring in Nürburg, Germany, on 29 May 2005.[1] The race would see Fernando Alonso secure his third win of the season, albeit after race leader Kimi Räikkönen suffered a suspension failure on the final lap.[1]

Qualifying, which saw a return to a more simplified one-lap format, would see Nick Heidfeld sweep to his first, and ultimately only, pole position for Williams-BMW.[1] Räikkönen was next for McLaren-Mercedes ahead of the second Williams of Mark Webber, while Championship leader Alonso would start from sixth.[1]

There were no issues ahead of the start of the race, until Giancarlo Fisichella stalled as the field began to line-up after completing the formation lap.[1] That start therefore had to be aborted as the Renault was dragged into the pits, with a second formation and attempt made a few minutes later.[1]

Fortunately the second attempted start would pass without issue, with Räikkönen immediately screaming away to claim the lead.[1] That left pole sitter and Heidfeld and his teammate Webber to fight for second, although sluggish starts from both Williams' allowed Jarno Trulli and Juan Pablo Montoya to pass the Australian racer.[1]

Yet, Webber would try and retaliate into the tight first corner, but would only manage to smash his own suspension as he slid into Montoya.[1] The rest of the field were hence forced to take avoiding action, resulting in Ralf Schumacher and Takuma Sato both picking up front wing damage.[1]

The early stages saw Räikkönen ease into a small lead, while Trulli was sent back to ninth having received a penalty for a grid infringement.[1] Elsewhere, Rubens Barrichello charged into the points with moves on Jenson Button and Vitantonio Liuzzi, only to open the first pitstop window.[1]

Räikkönen would lead all bar five laps during the pitstop phase, with first David Coulthard and then Alonso taking over from the Finn.[1] Regardless, it was still Räikkönen who led once the field had all stopped, with Heidfeld retaining second, Alonso moving into third, while Barrichello streaked into fourth.[1]

With that the race began to settle down, with the order out front remaining unchanged until Räikkönen locked up at the chicane and ran wide.[1] That allowed Heidfeld to dart past as the McLaren picked up bargeboard damage, before another lock-up prior his second stop caused a bigger flat-spot to develop on his front right tyre.[1]

Yet, Räikkönen would retake the lead before the second round of stops, and would build a huge fifteen second advantage over Alonso as Heidfeld slipped to third, on a three stop.[1] Indeed, Alonso would briefly challenge after making his third and final stop, although with time running out the Renault had no real response to the McLaren.[1]

With that the race looked to be over, although Räikkönen would struggle with a worsening vibration as the final laps ticked away.[1] Then, as he came to start the final lap the vibration drastically worsened, causing the McLaren's front right suspension to shatter and send the Finn skating off the circuit.[1]

Alonso duly streaked through to claim the lead and victory, while Heidfeld and Barrichello inherited podium spots.[1] Coulthard was next ahead of Michael Schumacher, with Giancarlo Fisichella, Montoya and Trulli claiming the remaining points.[1]

Despite failing to finish on the podium for the first time in 2005, Fernando Alonso had once again extended his lead, leaving Monte Carlo on 49 points. Race winner Kimi Räikkönen, meanwhile, had moved into second, but was left some 22 points adrift on the Spaniard in-spite of his second consecutive win. Behind, Jarno Trulli slipped a point behind the Finn, while Mark Webber and Nick Heidfeld completed the top five.

In the Constructors Championship it was still advantage Renault, although their lead had come down after the efforts of McLaren-Mercedes. Indeed, the two squads were separated by twelve points leaving Monaco, down from Renault's former eighteen point lead. Behind, Toyota had made way for McLaren, slipping eight behind, while it was status quo for the rest of the scorers.

The full entry list for the 2005 European Grand Prix is outlined below:

The full qualifying results for the 2005 European Grand Prix are outlined below:

The full results for the 2005 European Grand Prix are outlined below:

A third win of the campaign left Fernando Alonso in command of the Championship, particularly as it had come courtesy of misfortune for main rival Kimi Räikkönen. Indeed, had the Finn won the race then he would have cut the Spaniard's advantage to fifteen points, but his late retirement meant he instead left Germany some 32 points behind. Räikkönen would, however, retain second ahead of Jarno Trulli, while Nick Heidfeld and Mark Webber completed the top five.

In the Constructors Championship Renault had increased their lead, leaving Germany with a 23 point lead. Like lead driver Räikkönen, McLaren-Mercedes had faced a huge swing in points as a result of the Finn's late retirement, but would retain their status in second place. Toyota, meanwhile, had lost more ground in third, and were just a point ahead of Williams-BMW, while Ferrari were making steady ground in fifth.