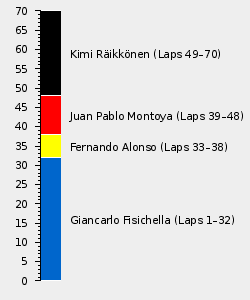 The 2005 Canadian Grand Prix, otherwise known as the XLIII Grand Prix du Canada, was the eighth round of the 2005 FIA Formula One World Championship, staged at the Circuit Gilles Villeneuve in Montreal, Canada, on 12 June 2005.[1] The race, which reportedly set a new ratings record for F1, would see Kimi Räikkönen fend off Michael Schumacher in a late-race fight for victory, as Championship leader Fernando Alonso retired.[1]

Qualifying had seen Jenson Button secure pole position for BAR-Honda, beating Schumacher by a quarter of a second.[1] Alonso, meanwhile, would start from third alongside teammate Giancarlo Fisichella, while Räikkönen would start from seventh.[1]

The start of the race would see both Button and Schumacher make poor getaways, allowing the two Renaults to charge past.[1] Fisichella and Alonso duly duelled for the lead into the first corner, the Italian emerging ahead, while Button managed to keep Schumacher and a fast starting Räikkönen at bay in the Renaults' wake.[1]

The opening stages would see Fisichella ease away from Alonso, while both managed to ease away from Button.[1] Behind, Räikkönen and Schumacher were jousting for fourth ahead of Jarno Trulli and Takuma Sato, while Rubens Barrichello was making steady progress after starting from the pitlane.[1]

The race settled down after that point, with the order at the head of the field remaining stable until Schumacher started the first pit phase on lap twelve.[1] Button and Ralf Schumacher were next to stop three laps later, while the two Renaults and the two McLaren-Mercedes continued, now filling the top four.[1]

Alonso and Räikkönen stopped together on lap 24, while Juan Pablo Montoya and Fisichella stopped on the following tour.[1] Montoya had ended the first stint very strongly and looked to have jumped everyone bar Montoya, but a mistake exiting the pitlane on cool tyres allowed Alonso to sweep back ahead.[1]

The race once again settled back down, until Fisichella's pace collapsed on lap 31 with a hydraulic issue, ultimately causing the Italian racer to retire on lap 33.[1] Behind, Button and Schumacher made their second stops as the lead three-stoppers in the field, before Alonso made an increasingly rare mistake on lap 39, hitting the outside wall at turn four.[1]

Alonso was out immediately with suspension damage, and hence left Montoya in the lead from Räikkönen, all on their own at the head of the field.[1] The order was then largely settled with Button and Schumacher fighting for third, until the German ace pressured Button into making a mistake, the BAR-Honda slapping the "Wall of Champions".[1]

The ruined BAR stopped on the start/finish straight, meaning the Safety Car was called upon to remove the stranded Brit.[1] Everyone would take the opportunity to make their final stops under the SC, although Montoya would lose the lead having been forced to take an extra lap as McLaren stopped Räikkönen first.[1]

The race resumed with twenty laps to go, and with Montoya under investigation for leaving the pits inspite of a red light.[1] The Colombian racer was duly disqualified in the closing stages, with Räikkönen left to fend off the attentions of the two Ferraris in the final laps.[1]

Yet, the Finn would hang on to claim his third win, and hence removed ten points from Alonso's impressive Championship lead.[1] Schumacher and Barrichello completed the podium ahead of Felipe Massa and Mark Webber, while Ralf Schumacher, David Coulthard and Christian Klien claimed the remaining points.[1]

A third win of the campaign left Fernando Alonso in command of the Championship, particularly as it had come courtesy of misfortune for main rival Kimi Räikkönen. Indeed, had the Finn won the race then he would have cut the Spaniard's advantage to fifteen points, but his late retirement meant he instead left Germany some 32 points behind. Räikkönen would, however, retain second ahead of Jarno Trulli, while Nick Heidfeld and Mark Webber completed the top five.

In the Constructors Championship Renault had increased their lead, leaving Germany with a 23 point lead. Like lead driver Räikkönen, McLaren-Mercedes had faced a huge swing in points as a result of the Finn's late retirement, but would retain their status in second place. Toyota, meanwhile, had lost more ground in third, and were just a point ahead of Williams-BMW, while Ferrari were making steady ground in fifth.

The full entry list for the 2005 Canadian Grand Prix is outlined below:

The full qualifying results for the 2005 Canadian Grand Prix are outlined below:

The full results for the 2005 Canadian Grand Prix are outlined below:

Victory for Kimi Räikkönen ensured that the Finn had closed the gap back to Fernando Alonso at the head of the Championship, although the Spaniard still enjoyed a fair lead. Indeed, Alonso left Canada having failed to score, but with twelve points in hand over Räikkönen, with the pair set to duel for the title over the rest of the season. Behind, Jarno Trulli slipped ten off of Räikkönen in third, Nick Heidfeld retained fourth, while Michael Schumacher broke into the top five.

In the Constructors Championship it had been a strong day for McLaren-Mercedes, although they were still shy of Renault's 76 point tally. The Anglo-German alliance would hence leave Canada thirteen off the French squad, with an identical margin keeping them ahead of Williams-BMW and Toyota. The latter duo had both ended the eighth weekend of the season on 47 points for the campaign, Williams-BMW ahead on countback, while Ferrari completed the top five, just two points behind.

Retrieved from "https://f1.fandom.com/wiki/2005_Canadian_Grand_Prix?oldid=87569"
Community content is available under CC-BY-SA unless otherwise noted.