Formula 1 Wiki
Register
Don't have an account?
Sign In
Advertisement
in: 2005 Grands Prix, British Grand Prix, Formula One races in the United Kingdom 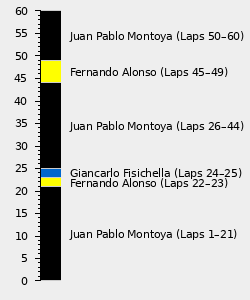 The 2005 British Grand Prix, formally known as the 2005 Formula 1 Foster's British Grand Prix, was the eleventh round of the 2005 FIA Formula One World Championship, staged at the Silverstone Circuit in Northamptonshire, UK, on 10 July 2005.[1] The race would see Juan Pablo Montoya and Fernando Alonso duel for victory, as traffic prevented either driver from escaping up the road.[1]

Qualifying had seen Alonso win the battle for pole position, beating Kimi Räikkönen in the #9 McLaren-Mercedes by 0.027s, although an engine change meant the Finn would start in twelfth.[1] Jenson Button was a strong third in front of his home fans, while Montoya secured fourth in the second McLaren.[1]

Ahead of the race there was a minute's silence, held as a mark of respect for those who were killed in the London Bombings on 7 July 2005.[1] Those terrorist acts had caused some concern over security for the British Grand Prix, although there were no concerns on race day itself.[1]

The start of the race itself would come without controversy, with FIA director Charlie Whiting opting to start the race in-spite of the fact that Takuma Sato had stalled on the run to the grid.[1] Fortunately the field would start ahead of the Japanese racer's stranded BAR-Honda, as Montoya got the jump on Button, while Räikkönen swept into the top ten.[1]

Montoya's charge would carry him past Alonso over the rest of the opening lap, before all battles were halted due to the Safety Car.[1] This was called upon to allow Sato's stranded BAR to be plucked from the grid, with the race resuming a lap later with Sato rejoining two laps down.[1]

With the race fully underway Montoya was able to build a small lead, although Alonso remained a significant threat to the McLaren during the early stages.[1] They both quickly dropped Button in third, leaving the Brit to fend off Rubens Barrichello, and Giancarlo Fisichella, while Jarno Trulli would form another bottle neck, keeping Michael Schumacher and Räikkönen at bay.[1]

The battles in the field would last through to the first round of stops, with Montoya pitting a lap early on lap 21 due to traffic.[1] Alonso stopped two laps later and made a faster stop, and hence emerged alongside the McLaren on the run to Maggotts, although the Colombian racer had the better line and hence reclaimed the lead.[1]

Fisichella was the big winner during the first round of stops, clearing Button and Barrichello, while Räikkönen also moved ahead of Trulli and Schumacher.[1] Barrichello's second of three stops then released the #9 McLaren to attack Button as Montoya and Alonso battled each other through the traffic out front.[1]

The second and final round of stops for the two stoppers began on lap 43, with Button making his final stop to release Räikkönen.[1] Montoya subsequently stopped from the lead two laps later, Räikkönen on the next, and would jump Button, while Fisichella stalled making his stop on lap 46 and hence dropped down the order.[1]

Alonso, meanwhile, would stay out until lap 49, but his bid for victory in clear air was halted by Trulli on his final lap, and hence meant he lost all the time he had gained.[1] He duly rejoined just a second behind Montoya with ten laps to go, with traffic ahead potentially allowing the Spaniard to attack.[1]

Yet, it was not to be, with Montoya playing the traffic perfectly to secure victory, 2.7s ahead of Alonso.[1] Räikkönen was a distant third to complete the podium, with Fisichella having threatened the #9 McLaren until the Finn set a series of fastest laps.[1] The remaining points went to Button, Schumacher, Barrichello and Ralf Schumacher of Toyota.[1]

Fernando Alonso secured his fifth win of the season to extend his Championship lead, leaving France with 24 points in hand. Kimi Räikkönen was still his closest challenger, moving onto 45 points for the campaign, while Michael Schumacher had slipped 29 points off the lead in third. Jarno Trulli and Rubens Barrichello completed the top five, while Jenson Button had become the 22nd scorer of the campaign with his first points of the season.

In the Constructors Championship it had been another strong day for Renault, leaving France with 89 points and an increased lead. McLaren-Mercedes remained their nearest threat, slipping eighteen points behind, while Ferrari had moved closer to their Anglo-German rivals, sitting just two behind. Toyota and Williams-BMW were next, while BAR-Honda's first points of the campaign ensured all ten constructors had scored.

The full entry list for the 2005 British Grand Prix is outlined below:

The full qualifying results for the 2005 British Grand Prix are outlined below:

The full results for the 2005 British Grand Prix are outlined below:

Fernando Alonso had once again extended his Championship lead as the 2005 season ploughed into its second half, leaving the UK with 77 points to his name. Kimi Räikkönen had remained his closest challenger, but slipped 26 behind, while Michael Schumacher looked to be out of the fight in third, 34 off the lead. Behind, Rubens Barrichello and Jarno Trulli were level on 31, and were also drifting out of contention, while race winner Juan Pablo Montoya moved into sixth.

In the Constructors Championship Renault and McLaren-Mercedes had effectively cancelled each other out in the UK, although it was the latter duo whom had gained. Indeed, they left their home race fifteen behind the French manufacturer, and having established a similar thirteen point advantage over Ferrari in third. Elsewhere, Toyota had retained fourth ahead of Williams-BMW, while BAR-Honda moved off the foot of the table and ahead of Minardi-Cosworth.