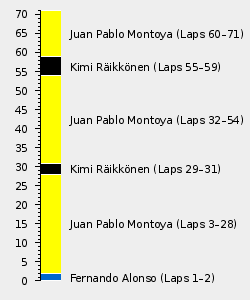 The 2005 Brazilian Grand Prix, officially the XXXIV Grande Prêmio do Brasil, was race number seventeen of the 2005 FIA Formula One World Championship, which took place at the Autódromo José Carlos Pace in São Paulo, Brazil, on 25 September 2005.[1] The race would see Juan Pablo Montoya and Kimi Räikkönen secure a dominant one-two for McLaren-Mercedes, as Fernando Alonso finished third to claim his maiden World Championship title with two races to go.[1]

Qualifying would see Alonso finally challenge for pole position, sweeping to the top spot as he attempted to wrap up the title.[1] Montoya was next ahead of Giancarlo Fisichella, while Alonso's main rival Räikkönen would start down in fifth behind Jenson Button.[1]

The start would see Montoya challenge Alonso into the Senna S, although the Spaniard stood his ground and retained the lead.[1] However, all of the attention was on the field behind, as David Coulthard smashed into the back of Antônio Pizzonia, having misjudged the Brazilian racer's manoeuvre ahead.[1]

That impact sent Pizzonia's Williams-BMW straight into the side of the sister car of Mark Webber, leaving all three drivers with heavy damage.[1] Furthermore, it would result in an early appearance for the Safety Car, as Webber dragged his hobbled Williams back to the pits.[1]

The restart came on lap three, with Alonso able to ace the restart to deny Montoya the ability to challenge, only to misjudge his entry into turn two.[1] The extra momentum ensured that the #5 Renault washed out wide, and hence allowed Montoya to slip right under his rear wing.[1] Moments later and the #10 McLaren was diving past the #5 Renault to claim the lead into turn four.[1]

Montoya soon checked out, while Alonso paced himself against Räikkönen, who had beaten Fisichella and Button at the original start.[1] Fisichella, meanwhile, found himself fighting with Michael Schumacher for fourth through the early laps, while Button headed a long line of cars, the result of the BAR-Honda lacking straight-line speed.[1]

However, the order would remain static, and would only change as the first pitstops of the afternoon were staged on lap fifteen.[1] Alonso duly became the first of the leaders to stop on lap 22, dropping to sixth before the rest of the stops unfolded.[1]

With Alonso's stop completed Räikkönen knew he had to push, and would subsequently deliver a string of fastest laps prior to his stop, the last of the leaders.[1] The ploy worked and the Finn duly streaked out of the pits with time in hand over Alonso's Renault, and with Montoya within touching distance ahead.[1]

The two McLaren-Mercedes checked out at that point, hoping that Alonso would challenge them and potentially push his Renault into a retirement.[1] However, the Spanish ace knew that third would be enough for him to claim the crown, and with Schumacher, now ahead of Fisichella, too far back to challenge, could afford to nurse his Renault to the flag.[1]

With that the race was effectively over before the halfway point, with the second round of stops resulting in no change at the front of the field.[1] Behind, Button and Ralf Schumacher would slip out of the points during that second pit phase, while Tiago Monteiro retired for the first time in his F1 career.[1]

Out front, meanwhile, Montoya and Räikkönen would have a well mannered duel for victory in the closing stages, with the Colombian ace emerging ahead.[1] Alonso, meanwhile, would duly claim third and the World Championship after a quiet afternoon, setting a new record as the youngest ever Champion, eclipsing Emerson Fittipaldi's 33 year-old mark.[1]

Victory for Kimi Räikkönen ensured that the title fight would go on for at least one more race, although the Finn was facing a very one-sided battle. Indeed, second place in Spa for Fernando Alonso ensured that the Spaniard had to score just six points across the final three rounds to claim the crown, leaving Belgium with 25 points in hand. Behind, Michael Schumacher was set to fight with Juan Pablo Montoya to finish third, while Jarno Trulli and Giancarlo Fisichella were to battle for fifth.

In the Constructors Championship McLaren-Mercedes had once again inched closer to leaders Renault, leaving Belgium with a six point deficit. Those two would hence battle it out over the final three races, with a huge 56 point gap back to Ferrari in third, now mathematically out of the fight. Toyota were the Scuderia's biggest threat, ten behind the Italian manufacturer, with Williams-BMW set to round out the top five.

The full entry list for the 2005 Brazilian Grand Prix is outlined below:

The full qualifying results for the 2005 Brazilian Grand Prix are outlined below:

The full results for the 2005 Brazilian Grand Prix are outlined below:

Third place in Brazil was enough for Fernando Alonso to claim the 2005 FIA Formula One World Championship with two rounds to spare, ending the weekend on 117 points. His closest challenger Kimi Räikkönen had technically closed the gap, although he was still 23 points behind with only twenty points to fight for. The Finn hence had to settle for second, as behind Juan Pablo Montoya moved ahead of Michael Schumacher on countback.

In the Constructors Championship McLaren-Mercedes had moved ahead of Renault at the head of the pack, and could therefore claim the crown in Japan. Indeed, should the Anglo-German alliance outscore Renault by sixteen points in Suzuka then they would claim the crown, while Renault would take the lead heading into the finale if they outscored McLaren by three. Elsewhere, Ferrari had moved seventeen points clear of Toyota in third, while Williams-BMW were set to finish in fifth.

Retrieved from "https://f1.fandom.com/wiki/2005_Brazilian_Grand_Prix?oldid=87759"
Community content is available under CC-BY-SA unless otherwise noted.