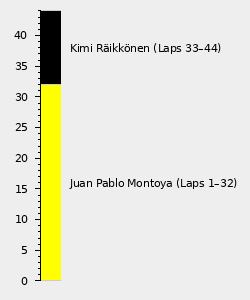 The 2005 Belgian Grand Prix, otherwise known as the 2005 Formula 1 Belgian Grand Prix, was the sixteenth round of the 2005 FIA Formula One World Championship, staged at the Circuit de Spa-Francorchamps in Spa, Belgium, on 11 September 2005.[1] The race would see Kimi Räikkönen claim victory to keep his title hopes alive, although Fernando Alonso finished second to leave Spa just six points away from the crown.[1]

Qualifying had seen Räikkönen get beaten to pole position by McLaren-Mercedes teammate Juan Pablo Montoya, losing out by half a tenth.[1] Giancarlo Fisichella and Jarno Trulli made it an all Italian second row, only for the #6 Renault to get a grid penalty, with Alonso inheriting fourth ahead Ralf Schumacher.[1] The Spaniard could win the Championship if he out-scored Räikkönen by four points in Spa.[1]

It would rain on race morning, although by the time the field began to line-up on the grid a large part of the circuit was drying.[1] Almost everyone would opt to start on intermediate or slick tyres, although the two Minardi-Cosworth opted to start from the pitlane having changed their setups to compensate for the conditions.[1]

The start itself would be incredibly clean given the conditions, with Montoya easing into an early lead, while Räikkönen had to fend off the attentions of Trulli.[1] Further down, Takuma Sato streak up the field to claim seventh behind Michael Schumacher, with a lot of twitching on the brakes behind.[1]

The rest of the opening lap passed without issue, with Montoya and Räikkönen checking out at the front of the field.[1] Trulli, meanwhile, would fend off the attentions of Alonso, while a mistake from Ralf Schumacher at the Bus-stop dumped him back to eighth and allowed Jenson Button to attack teammate Sato.[1]

Fisichella proved to be the man to watch during the early stages of the race, charging up the order to eighth with a series of clean moves.[1] However, having passed Button the Italian racer would put too much faith in the kerbs at Eau Rouge, and duly went skating into the barriers at Radillion at high speed.[1]

The Italian racer emerged from his wrecked Renault without injury, with the Safety Car appearing to allow the debris to be removed.[1] At that point several drivers would dive into the pits, with Räikkönen backing up the field to avoid getting stuck behind teammate Montoya, for McLaren called in both their drivers at the same time.[1]

Only Jacques Villeneuve would remain out, and would restart the race in second behind Montoya and ahead of Ralf Schumacher, who had stopped a lap before the SC.[1] Montoya duly checked out at the head of the field as Räikkönen and Alonso tried to move back past the Toyota and the Sauber-Petronas.[1] At the back, meanwhile, Sato would mess up his braking point into La Source, and duly removed Michael Schumacher from the race.[1]

Villeneuve would soon slip back down the order, although neither Ralf Schumacher, Räikkönen nor Alonso could challenge Montoya.[1] Indeed, the second round of stops would only result in Ralf Schumacher slipping out of the lead group, with the leaders all sticking with intermediates.[1]

Into the closing stages and Rubens Barrichello, Mark Webber and Antônio Pizzonia all switched to drys, and immediately began lapping quickly.[1] As a result, Webber led Barrichello on towards the leaders, with Button in fourth challenging Alonso for third, albeit with time running out.[1]

However, there would be one late twist as Montoya's McLaren was suddenly spotted buried in the tyre wall at Fagnes.[1] The cause was a clash between the Colombian ace and a lapped but faster Pizzonia, resulting in both cars receiving terminal damage.[1]

With that the race was run, with Räikkönen easing through the final laps to claim victory to keep his slim title hopes alive.[1] Alonso, meanwhile, secured second to all but secure the crown, with Button completing the podium well clear of Webber.[1] Barrichello, Villeneuve, Ralf Schumacher and Tiago Monteiro claimed the remaining points.[1]

With four races to go the World Championship battle seemed to be over, for Fernando Alonso had managed to extend his lead to 27 points over Kimi Räikkönen. That meant that the Spanish ace could secure the title in Belgium if he out-scored the Finn by four points in Spa. Räikkönen, meanwhile, would have to beat Alonso in each of the four remaining races just to stand a hope of taking the crown, with those two the only drivers mathematically in the fight.

In the Constructors Championship it had been a fairly even day for the main protagonists, with McLaren-Mercedes only able to nudge a point closer to Renault's 144 point tally. Indeed, the Anglo-German squad were sat eight off the French manufacturer with four rounds to go, and were the only constructor feasibly capable of overhauling the French squad in 2005. Indeed, Ferrari were still mathematically in the hunt, but with a huge 58 point deficit to the leaders.

The full entry list for the 2005 Belgian Grand Prix is outlined below:

The full qualifying results for the 2005 Belgian Grand Prix are outlined below:

The full results for the 2005 Belgian Grand Prix are outlined below:

Victory for Kimi Räikkönen ensured that the title fight would go on for at least one more race, although the Finn was facing a very one-sided battle. Indeed, second place in Spa for Fernando Alonso ensured that the Spaniard had to score just six points across the final three rounds to claim the crown, leaving Belgium with 25 points in hand. Behind, Michael Schumacher was set to fight with Juan Pablo Montoya to finish third, while Jarno Trulli and Giancarlo Fisichella were to battle for fifth.

In the Constructors Championship McLaren-Mercedes had once again inched closer to leaders Renault, leaving Belgium with a six point deficit. Those two would hence battle it out over the final three races, with a huge 56 point gap back to Ferrari in third, now mathematically out of the fight. Toyota were the Scuderia's biggest threat, ten behind the Italian manufacturer, with Williams-BMW set to round out the top five.