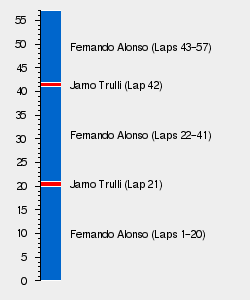 The 2005 Bahrain Grand Prix, officially advertised as the 2005 Formula 1 Gulf Air Bahrain Grand Prix, was the third race of the 2005 FIA Formula One World Championship, which took place at the Bahrain International Circuit on 3 April 2005.[1] The race would see Fernando Alonso sweep to victory for Renault, beating former teammate Jarno Trulli for the second race in succession.[1]

Qualifying, which continued to use the cumulative format introduced at the start of the season, would see Alonso claim pole position, edging out Michael Schumacher.[1] Trulli would start from third ahead of the two Williams-BMWs, while Ralf Schumacher in the second Toyota completed the top six.[1]

Race day saw the old track and air temperatures obliterated as the field assembled on the grid, with the air temp peaking at 42.5°C as the field lined up for the start.[1] That may have been a factor in Christian Klien stalling on the formation lap, with the Austrian's Red Bull-Cosworth pushed into the pits to be restarted.[1]

Fortunately there were no issues for the start proper, with Alonso streaking away to secure the lead ahead of Schumacher.[1] Instead, the German ace came under attack from a fast starting Trulli, but managed to force the Italian back down to third, while Rubens Barrichello streaked into the top ten in the #2 Ferrari.[1]

Alonso quickly established a lead at the head of the field, although there was some panic within the garage as the sister Renault of Giancarlo Fisichella made a smokey exit on lap four.[1] Yet, the Spaniard was not affected and continued to eek out his meagre lead, with Schumacher's #1 Ferrari remaining glued to his tail.[1]

That was, until the German ace made a rare mistake, spinning at turn nine when lining up a move on the Spaniard.[1] He duly retired at the end of the lap as his team diagnosed a hydraulic failure on the scarlet Ferrari, ending a 58 Grand Prix streak of mechanical fortitude.[1]

With that Alonso was away, with Trulli and Mark Webber three seconds behind, while Ralf Schumacher moved into fourth.[1] That was changed at the first round of stops as Alonso escaped further up the road, while Schumacher slipped behind Kimi Räikkönen.[1]

Prior to the second round of stops Webber would compromise his race with a spin at turn nine, which not only allowed Räikkönen and Schumacher to pass but also flat-spotted his tyres.[1] He duly dropped out of the fight for the podium, with the order out front remaining unchanged through the second refuelling phase.[1]

Indeed, there would be no fighting at the front of the field for the rest of the race, leaving most of the interest in Webber's slow drift back towards Pedro de la Rosa and Rubens Barrichello.[1] Their fight would last until de la Rosa finally claimed fifth on the penultimate lap, while Barrichello's pace collapsed in the closing stages, allowing Felipe Massa to challenge the #2 Ferrari.[1]

Out front, meanwhile, Alonso cruised through the final laps to claim his second straight victory, and the 100th for a Renault engine.[1] Trulli continued his strong form to claim second ahead of Räikkönen, with Schumacher, de la Rosa, Webber, Massa and David Coulthard claiming the rest of the points.[1]

Fernando Alonso moved to the top of the Championship after his victory in Malaysia, leaving Sepang with sixteen points to his name. Teammate Giancarlo Fisichella made way for him, dropping to second after his retirement, while Jarno Trulli had leapt into third after his podium finish. The Italian racer headed a quartet of drivers on eight points, with twelve drivers on the score sheet.

In the Constructors Championship Renault had continued to build their early advantage, moving onto 26 points after Alonso's triumph. Toyota, meanwhile, had streak straight into second after their maiden trip to the podium, a point ahead of Red Bull-Cosworth in third. The Austrian rookies were themselves a point ahead of Ferrari and Williams-BMW, while McLaren-Mercedes were a further point behind as the final scorers.

The full entry list for the 2005 Bahrain Grand Prix is outlined below:

The full qualifying results for the 2005 Bahrain Grand Prix are outlined below:

The full results for the 2005 Bahrain Grand Prix are outlined below:

Two wins and a second place for Fernando Alonso in the opening three rounds had left the Spaniard atop the Championship as the European season approached, leaving Bahrain with 26 points. That translated into a ten point advantage over second placed Jarno Trulli, with the Italian racer six ahead of Giancarlo Fisichella in third. Behind, Ralf Schumacher and David Coulthard completed the top five, level on nine, with fourteen drivers on the score board.

In the Constructors Championship Renault continued their early-season break away at the head of the pack, departing Sakhir on 36 points and a nine point advantage. Toyota had remained their closest challengers, while McLaren-Mercedes had moved into third, and just managed to stay within a race weekend's worth of points of the early leaders. Behind, Williams-BMW moved into fourth ahead of Red Bull-Cosworth, while Ferrari slipped to sixth.