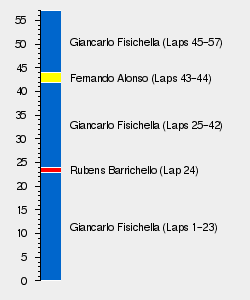 The 2005 Australian Grand Prix, officially advertised as the 2005 Formula 1 Foster's Australian Grand Prix was the opening round of the 2005 FIA Formula One World Championship, which took place at the Melbourne Grand Prix Circuit in Melbourne, Australia, on 6 March 2005.[1] The race would see Giancarlo Fisichella claim victory on his debut for Renault, as defending World Champion Michael Schumacher retired with damage.[1]

The winter had seen several changes made to the field, with Jaguar and Ford the notable absentees over the winter. Jaguar had become Red Bull having been bought by the Austrian drinks firm, while Jaguar's former owners Ford had ended all of their F1 programmes, including their long standing partnership with Cosworth. The small British firm would continue to supply F1 engines, however, with Red Bull and Minardi using their latest units.

Elsewhere there had been some major changes on the driver front, with Juan Pablo Montoya moving to McLaren-Mercedes from Williams-BMW.[1] He replaced the veteran David Coulthard, who moved to Red Bull, Ralf Schumacher moved to Toyota, meaning Williams were left to hire Mark Webber and Nick Heidfeld, while 1997 World Champion Jacques Villeneuve rejoined the paddock as he took a seat at Sauber-Petronas.[1]

Furthermore, there had been some significant changes to the rule book, with both tyres and engines affected.[2] Each driver's engine would now have to last two full race weekends (excluding free practice and barring a failure), while each driver was only allowed to use a single set of tyres for the Grand Prix.[2]

Into the first weekend of the 2005 season itself and it was clear that Ferrari's domination from 2004 was over, as both Schumacher and Rubens Barrichello failed to get into the top ten.[1] Instead, it was Fisichella who emerged on pole position ahead of Jarno Trulli in qualifying, with a new format seeing a driver's times from Q1 (low fuel) and Q2 (starting fuel) combined.[1]

The first attempt at starting the race would have to be aborted when Kimi Räikkönen stalled, meaning a lap was struck from the distance.[1] The second attempt passed without issue, with Fisichella streaking ahead of Trulli at the head of the field.[1]

Those two quickly established a lead at the head of the field, while home hero Webber tried in vain to find a way past Coulthard who had jumped the Aussie at the start.[1] Indeed, the new Red Bull was not the quickest car in the field, and hence ensured that the Scot had a queue of cars behind him throughout the early laps.[1]

That queue allowed Fernando Alonso and Rubens Barrichello to climb up the order, before the first round of stops partially reset the field.[1] Indeed, while Fisichella remained at the head of the field ahead of Trulli, Barrichello and Alonso would jump the rest of the Coulthard conga to move into third and fourth.[1]

That soon became second and third, however, as Trulli's pace collapsed as a blister opened up on his second set of Michelin tyres.[1] With that the race began to settle down, with Trulli falling down the field, with the field remaining largely unchanged through the second round of stops.[1]

The only changes to come during that period would involve two potential title contenders, who both tangled with back markers.[1] The first incident saw Schumacher close the door on Heidfeld, resulting in both cars receiving terminal damage, before Montoya lost a lot of time when he ran off the circuit lapping a Minardi.[1]

With that the race was run, with Fisichella cruising through the third and final stint to claim his first win for Renault.[1] Barrichello, meanwhile, would fend off a challenge from Alonso in the closing stages as they completed the podium, with the rest of the points awarded to Coulthard, Webber, Montoya, Christian Klien and Räikkönen.[1]

The race was also significant as the first to feature an Indian born driver in the form of Narain Karthikeyan, while Tiago Monteiro became the first Portugese driver to race in F1 since Pedro Lamy in 1996.

The full entry list for the 2005 Australian Grand Prix is outlined below:

The full qualifying results for the 2005 Australian Grand Prix are outlined below:

The full results for the 2005 Australian Grand Prix are outlined below: