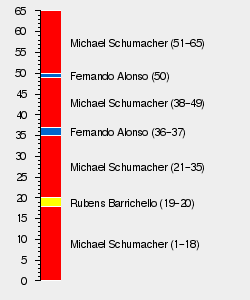 The 2003 Spanish Grand Prix, officially known as the Gran Premio Marlboro de España 2003, was the fifth round of the 2003 FIA Formula One World Championship, staged at the Circuit de Catalunya in Barcelona, Spain, on 4 May 2003.[1] The race would see Michael Schumacher sweep to a dominant victory for Ferrari, ahead of home hero Fernando Alonso of Renault.[1]

Qualifying for the race had seen Ferrari run unopposed at the head of the field, with Schumacher claiming pole position ahead of Rubens Barrichello.[1] Alonso, meanwhile, would give the home fans hope by claiming third ahead of his teammate Jarno Trulli, while an awful session for Kimi Räikkönen left the Championship leader in last place.[1]

The start of the race saw Alonso make the best start, although he was unable to exploit it as he got boxed in behind Barrichello.[1] Indeed, the Brazilian ace had also got away smartly to challenge teammate Schumacher into the first corner, although his lunge around the outside of his teammate only resulted in the #2 Ferrari clipping the grass.[1]

The lost momentum for Barrichello let Schumacher sprint clear, leaving the Brazilian racer to fend off Alonso through turn three.[1] Behind, however, there was chaos, as Trulli tried to make up for a poor start, only to slam into David Coulthard and bring out the Safety Car.[1] It was Räikkönen, however, who was the biggest victim, getting wiped out amid the chaos as the field scattered to avoid the collision.[1]

Several teams and drivers would opt to make stops during the early SC laps, hence altering their strategies from three-stops to two-stops.[1] However, none of the lead trio would stop, sticking with their three-stop plan, and would hence sprint clear together with lighter fuel when the race resumed.[1]

Indeed, the fight for the lead quickly became a battle of strategies, with Barrichello dropping back to hold up Alonso, while Schumacher established a five second lead.[1] However, the Spaniard would make an earlier stop than either of the Ferraris, and with clear air would halve Schumacher's lead and jump ahead of Barrichello.[1]

However, Alonso ultimately lacked the pace to challenge Schumacher, with the German ace steadily pulling clear of the Renault during their second and third stints.[1] Alonso himself, meanwhile, was able to keep Barrichello at arm's length, meaning the fight for the podium was effectively over with half of the race to run.[1]

Behind, Williams-BMW had used the SC to swap their strategies, and hence ran in fourth and fifth with Ralf Schumacher and Juan Pablo Montoya.[1] However, their race would be upset when Schumacher flew off the circuit and damaged his cooling system, allowing Cristiano da Matta in the Toyota to close in as Montoya swept past.[1]

Into the closing stages and da Matta was throwing everything at Ralf Schumacher, although the crippled Williams had enough pace in the corners to keep the Toyota at bay.[1] Mark Webber would also briefly join the fight, before fading badly as the final laps were concluded.[1]

With that the race was run, with Michael Schumacher cruising across the line to claim victory, while the home fans were jubilant as Alonso swept to second.[1] Barrichello had a lonely second half of the race to complete the podium, with Montoya, Ralf Schumacher, da Matta, Webber and Ralph Firman the remaining point scorers.[1]

Kimi Räikkönen once again extended his early grip on the Championship lead after a second straight second place, leaving San Marino on 32 points. David Coulthard remained in his younger teammate's shadow, slipping thirteen behind, while victory for Michael Schumacher had catapulted the German ace into third, a point behind the Scot. Fernando Alonso was one of those to make way for Schumacher, slipping to fourth, with Rubens Barrichello moving into fifth.

In the Constructors Championship McLaren-Mercedes had continued their bid to build a lead, and would leave Italy with nineteen points in hand. Ferrari had moved up to be the Anglo-German squad's closest challengers, with Renault slipping six behind the Italian squad. Williams-BMW also made some minor ground in fourth, with Jordan-Ford Cosworth completing the top five.

The full entry list for the 2003 Spanish Grand Prix is outlined below:

The full qualifying results for the 2003 Spanish Grand Prix are outlined below:

The full results for the 2003 Spanish Grand Prix are outlined below:

A second victory in a row for Michael Schumacher carried the German ace right to the head of the field, leaving him just four off the lead after a slow start. Indeed, a non-score for Kimi Räikkönen had left him looking vulnerable at the head of the pack, with Fernando Alonso also moving within striking distance in third. Elsewhere, David Coulthard had slipped to fifth behind Rubens Barrichello, with sixteen drivers on the scoresheet.

In the Constructors Championship it had been a very strong afternoon for Ferrari, as they demolished the gap between themselves and early leaders McLaren-Mercedes. The double failure to score in Spain had been very costly for the Anglo-German alliance, leaving them just three ahead of the Scuderia as their strong start to the season faded. Behind, Renault had kept Williams-BMW at bay, while Minardi-Ford Cosworth were left as the only non-scorers.