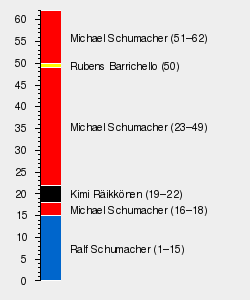 The 2003 San Marino Grand Prix, officially advertised as the Gran Premio Foster's di San Marino 2003, was the fourth race of the 2003 FIA Formula One World Championship, which took place at the Autodromo Enzo e Dino Ferrari in Imola, Italy, on 20 April 2003.[1] The race would see Michael Schumacher kick-start his title defence with a first victory of the season, just hours after himself and brother Ralf lost their mother Elizabeth.[1]

Qualifying had seen the two Schumacher brothers duel for pole position, with Michael emerging ahead in the #1 Ferrari by 0.014s.[1] Rubens Barrichello was next ahead of Juan Pablo Montoya, while Championship leader Kimi Räikkönen started from sixth behind Mark Webber.[1]

The start of the race saw their fight continue, with the #4 Williams-BMW scrambling ahead of the Ferrari to claim the lead.[1] THe rest of the field were led by Barrichello and Montoya, while a software glitch for Webber saw his Jaguar-Ford Cosworth crawl off the grid, sending the field scattering across the circuit.[1]

The big winner from Webber's issue was David Coulthard, who leapt from twelfth to eighth in the chaos despite having to take to the grass.[1] Fortunately there were no collisions or incidents, with the field making it through the rest of the opening lap without issue.[1]

The early stages of the race was all about the duel for victory between the two Schumachers, with Ralf putting up a ferocious defence from Michael.[1] Indeed, the two were in a league of their own in the early stages, with Barrichello and Montoya left to have a half-hearted fight for third with Räikkönen.[1]

Unfortunately the Schumacher battle would only last until the first round of stops, with Michael stopping two laps later to leap ahead of his brother to claim the lead.[1] With that the #1 Ferrari was away, pulling clear by a second a lap to leave Ralf looking in his mirrors at Barrichello.[1]

Behind there was little action to be had, despite the efforts of Giancarlo Fisichella, who would elbow his way past Cristiano da Matta before setting up a move on Jarno Trulli.[1] Unfortunately, the Italian's lunge at the Renault at Rivazza on lap 34 would end with the pair clattering together, allowing da Matta to sweep back ahead.[1] This would be the only series of on-track overtakes after the opening lap.[1]

Out front, meanwhile, Ralf Schumacher and Barrichello played pit-stop leap-frog, with three-stop strategies for both seeing Barrichello briefly get ahead by stopping later, only for an issue on everyone of his stops to put him behind the Williams.[1] Ultimately, however, it was not to be for either driver, as Räikkönen emerged in second on a superior two-stop strategy, before Barrichello pounced on a Williams blunder in Ralf's second stop to claim third.[1]

With that the race was run, with Michael Schumacher cruising across the line to claim victory ahead of Räikkönen.[1] Barrichello completed a rather sombre podium, which saw no champagne spraying as a mark of respect, with Ralf Schumacher claiming fourth ahead of Coulthard, Fernando Alonso, Montoya and Jenson Button.[1]

Kimi Räikkönen extended his Championship lead despite his late demotion in Brazil, leaving São Paulo with 24 points. David Coulthard had likewise retained second, but slipped nine behind his teammate, while Fernando Alonso was up to third, and cleared to race in San Marino. Race winner Giancarlo Fisichella, meanwhile, was the big winner as he leapt up into fourth, with Jarno Trulli completing the top five.

In the Constructors Championship it was McLaren-Mercedes who continued to lead the way, holding 39 points after three races in 2003. Renault, meanwhile, had moved into second on 23 points, while Ferrari had slipped back to third, only ahead of Williams-BMW on countback. Jordan-Ford Cosworth were next after their rare win, with Sauber-Petronas and BAR-Honda the other scorers.

The full entry list for the 2003 San Marino Grand Prix is outlined below:

The full qualifying results for the 2003 San Marino Grand Prix are outlined below:

The full results for the 2003 San Marino Grand Prix are outlined below:

Kimi Räikkönen once again extended his early grip on the Championship lead after a second straight second place, leaving San Marino on 32 points. David Coulthard remained in his younger teammate's shadow, slipping thirteen behind, while victory for Michael Schumacher had catapulted the German ace into third, a point behind the Scot. Fernando Alonso was one of those to make way for Schumacher, slipping to fourth, with Rubens Barrichello moving into fifth.

In the Constructors Championship McLaren-Mercedes had continued their bid to build a lead, and would leave Italy with nineteen points in hand. Ferrari had moved up to be the Anglo-German squad's closest challengers, with Renault slipping six behind the Italian squad. Williams-BMW also made some minor ground in fourth, with Jordan-Ford Cosworth completing the top five.