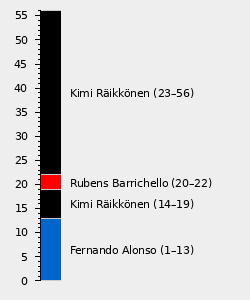 The 2003 Malaysian Grand Prix, otherwise officially known as the 2003 Petronas Malaysian Grand Prix, was the second round of the 2003 FIA Formula One World Championship, staged at the Sepang International Circuit in Sepang, Malaysia, on 23 March 2003.[1] The race would see two drivers make their breakthroughs, one by claiming a maiden pole position, and one taking his maiden victory.[1]

The first emerging star of the weekend would be Fernando Alonso, who delivered a stunning run in qualifying to claim pole for Renault, their first since the 1984 French Grand Prix.[1] Teammate Jarno Trulli subsequently made it a front-row lock-out for the French squad, with defending Champion Michael Schumacher sharing the second row with Championship leader David Coulthard.[1]

The start saw Alonso sprint away to secure an early lead, while Trulli did his best to fend off a charging Schumacher.[1] Somewhat inevitably the German's attempts to force the issue resulted in contact, with the Italian sent spinning while Schumacher sustained heavy wing damage.[1]

With that Alonso was away, as behind avoiding action from Juan Pablo Montoya resulted in the Williams-BMW getting whacked by Antônio Pizzonia.[1] David Coulthard hence emerged from the chaos in second ahead of Nick Heidfeld, with Kimi Räikkönen chasing the Sauber-Petronas for third.[1]

Coulthard's race came to an end a lap later after an electronics failure, just as Räikkönen dived past Heidfeld in the sister McLaren-Mercedes.[1] Alonso, meanwhile, would continue to break away at the head of the field, knowing that he was set to make an early stop having opted to start on a lighter fuel load.[1]

The Spaniard's stop came on lap fourteen, by which time Rubens Barrichello, the first of the "old guard", had secured third from Heidfeld, who began a slow tumble down the field.[1] Alonso rejoined in third but lacked immediate pace due to his fuel load, and hence was unable to prevent Räikkönen from leap-frogging him when the Finn stopped five laps later.[1]

With that Räikkönen was the man to watch, the Finn easing away as Barrichello stopped and rejoined behind Alonso.[1] Elsewhere, Trulli was back up to sixth and fighting with Jenson Button, Ralf Schumacher ran in a lonely fourth, while Michael Schumacher was steadily catching all three, having served a penalty for causing his first corner collision.[1]

The second wave of stops began with Alonso on lap 35, which duly resulted in him being dumped back to third as Barrichello delivered three quick laps.[1] Trulli, meanwhile, looked set to jump Button until a sticking fuel nozzle ruined his stop, while Schumacher briefly moved ahead of both before making his final stop.[1]

Out front, meanwhile, Räikkönen was left all on his own, completing his second and final stop without issue before cruising to his maiden victory.[1] Barrichello finished a distant second ahead of Alonso, while Trulli and Schumacher would both elbow their way past Button in the closing stages to finish behind Ralf Schumacher.[1]

Among the other feats achieved in the race, Alonso would set a new record for the youngest driver to lead a lap (21 years 237 days), breaking Jimmy Davies' mark from the 1951 Indianapolis 500. The Spaniard also claimed the record for youngest ever pole setter from Barrichello, set in 1994. Räikkönen, meanwhile, would become the fourth youngest race winner in F1 history at 23 years, 157 days.

Victory on the opening day left David Coulthard at the head of the early hunt, two points ahead of Juan Pablo Montoya as a result of the revised points scoring scheme. Kimi Räikkönen was next ahead of defending Champion Michael Schumacher, while Jarno Trulli completed the top five. The rest of the opening day scorers were Heinz-Harald Frentzen, Fernando Alonso and Ralf Schumacher.

In the Constructors Championship it was McLaren-Mercedes who led the early charge, a double podium putting them on 16 points after the opening bout. Williams-BMW were next up on nine ahead of Renault, with Ferrari and Sauber-Petronas the only other scorers.

The full entry list for the 2003 Malaysian Grand Prix is outlined below:

The full practice results for the 2003 Malaysian Grand Prix are outlined below:

The full qualifying results for the 2003 Malaysian Grand Prix are outlined below:

The full results for the 2003 Malaysian Grand Prix are outlined below:

Kimi Räikkönen moved to the head of the Championship after his maiden victory, leaving Malaysia with a six point advantage. Teammate David Coulthard had made way for him, but had retained second despite failing to score, while no fewer than five drivers trailed them on eight points. Head of that pack were Juan Pablo Montoya and Rubens Barrichello after their second places, while Fernando Alonso, Michael Schumacher and Jarno Trulli completed the quintet.

In the Constructors Championship McLaren-Mercedes' strong start had left them with a small lead at the head of the field, leaving the second round with ten points in hand. Ferrari, meanwhile, had moved into second, albeit level with Renault, while Williams-BMW had slipped to fourth. Behind, Sauber-Petronas had retained fifth, while BAR-Honda had become the sixth scorer of the campaign.