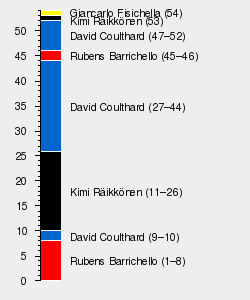 The 2003 Brazilian Grand Prix, officially known as the Grande Prêmio do Brasil 2003, was the third round of the 2003 FIA Formula One World Championship, which took place at the Autódromo José Carlos Pace in São Paulo, Brazil, on 6 April 2003.[1] The race, which was the 700th World Championship Grand Prix to be staged, would conclude in dramatic fashion, as late red flag caused chaos and confusion for days after the race.[1]

Qualifying had seen Rubens Barrichello in fine form on home soil, sweeping to pole position ahead of David Coulthard of McLaren-Mercedes.[1] Mark Webber was next in an impressive third for Jaguar-Ford Cosworth, while Kimi Räikkönen, Championship leader arriving in Brazil, started from fourth.[1]

Raceday dawned with horrible weather conditions, while McLaren and BAR-Honda were given permission to change the engines of Räikkönen and Jacques Villeneuve after damage was detected in their units.[1] Indeed, so poor were the conditions that FIA race director Charlie Whiting delayed the start for fifteen minutes, before ultimately deciding to start the race behind the Safety Car.[1]

The SC stayed out for eight laps as the rain finally stopped, with several drivers making stops for fuel in hopes of making it to the end without another refill.[1] The restart itself saw Barrichello wait until the last moment to break away, only to see Coulthard slither inside him on the brakes for the Senna S to claim the lead.[1]

The Scot quickly established a lead, while Barrichello was left to fend off the attentions of Webber and Räikkönen.[1] Behind, Juan Pablo Montoya looked inspired as he danced his Williams-BMW through to fifth from eighth on the grid, while Nick Heidfeld became an early retirement with an oil leak.[1]

Montoya's warpath soon carried him past Webber and Barrichello, moments after the #6 McLaren of Räikkönen had passed the #2 Ferrari of Barrichello to claim second.[1] He duly went scampering off after the two McLarens, with Räikkönen catching and passing Coulthard before the Colombian ace could catch them.[1]

The circuit was drying rapidly everywhere apart from turn three, meaning drivers were beginning to burn through their tyres.[1] Yet, it would not be long before the safety car reappeared, this time to allow the removal of Ralph Firman and Olivier Panis' cars from the start/finish straight after a collision on lap eighteen.[1]

The restart came on lap 22 after several stops, meaning Räikkönen led from Coulthard, Michael Schumacher and Cristiano da Matta of Toyota.[1] However, it was not long before the safety car was called upon for a third time, with quick fire accidents for Montoya, Antônio Pizzonia and Schumacher at turn three, the German having narrowly avoided the recovery vehicle removing Pizzonia's car under yellow flags.[1]

Räikkönen and da Matta stopped during the third SC, handing the lead to Coulthard for three laps, before the SC was called upon again as Jenson Button crashed heavily at Curva del Sol.[1] Coulthard once again led away to main his lead, while Räikkönen began his climb back towards his teammate with a move on Fernando Alonso for fourth.[1]

Out front Barrichello would hunt down and pass Coulthard for the lead on lap 45, while Räikkönen closed in on Giancarlo Fisichella for third.[1] However, when it came to their stops Barrichello would lose a lot of time with a fuel sensor issue, dropping him back down behind the lead group.[1]

The left Räikkönen leading from Fisichella and Alonso, with the latter two closing in on the Finn as fuel became a major concern.[1] On lap 54 Fisichella slid inside the McLaren to claim the lead as Räikkönen ran wide, moments before Webber had a huge accident at Arquibancadas.[1]

Fisichella and Räikkönen were first on the scene and picked their way though the debris, before a distracted Alonso slammed into one of the Jaguar's tyres, causing him to crash heavily.[1] A red-flag was thrown and the race result declared a lap later, with Räikkönen initially handed the victory on count-back.[1]

However, FIA official Whiting would launch an investigation about the result, citing a timing glitch that meant Fisichella was not officially registered as having completed lap 54, despite having led Räikkönen across the line.[1] A hearing was held at the FIA headquarters in Paris on 11 April, and duly awarded Fisichella his maiden win ahead of Räikkönen and Alonso.[1] All three would unofficially take their trophies at the following race in San Marino, with Alonso having been sent to hospital for checks after his accident.[1]

The race was also significant as the 176th and final victory for a Ford Cosworth engine, as well as the final triumph for the Jordan team in their 200th race.[1]

Kimi Räikkönen moved to the head of the Championship after his maiden victory, leaving Malaysia with a six point advantage. Teammate David Coulthard had made way for him, but had retained second despite failing to score, while no fewer than five drivers trailed them on eight points. Head of that pack were Juan Pablo Montoya and Rubens Barrichello after their second places, while Fernando Alonso, Michael Schumacher and Jarno Trulli completed the quintet.

In the Constructors Championship McLaren-Mercedes' strong start had left them with a small lead at the head of the field, leaving the second round with ten points in hand. Ferrari, meanwhile, had moved into second, albeit level with Renault, while Williams-BMW had slipped to fourth. Behind, Sauber-Petronas had retained fifth, while BAR-Honda had become the sixth scorer of the campaign.

The full entry list for the 2003 Brazilian Grand Prix is outlined below:

The full qualifying results for the 2003 Brazilian Grand Prix are outlined below:

The full results for the 2003 Brazilian Grand Prix are outlined below:

Kimi Räikkönen extended his Championship lead despite his late demotion in Brazil, leaving São Paulo with 24 points. David Coulthard had likewise retained second, but slipped nine behind his teammate, while Fernando Alonso was up to third, and cleared to race in San Marino. Race winner Giancarlo Fisichella, meanwhile, was the big winner as he leapt up into fourth, with Jarno Trulli completing the top five.

In the Constructors Championship it was McLaren-Mercedes who continued to lead the way, holding 39 points after three races in 2003. Renault, meanwhile, had moved into second on 23 points, while Ferrari had slipped back to third, only ahead of Williams-BMW on countback. Jordan-Ford Cosworth were next after their rare win, with Sauber-Petronas and BAR-Honda the other scorers.