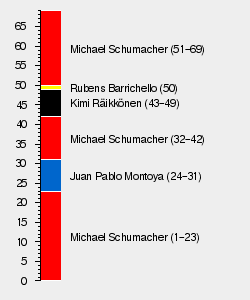 The 2003 Austrian Grand Prix, officially known as the A1 Grand Prix von Österreich 2003, was the sixth race of the 2003 FIA Formula One World Championship, staged at the A1 Ring on 18 May 2003.[1] The race was won by Michael Schumacher in dominant fashion, despite having a brief fire scare in the pits during one of his stops.[1]

Qualifying had caused confusion as no clear picture emerged, with Bridgestone and Michelin tyres performing differently on each car, while the weather remained unpredictable ahead of the race.[1] Ultimately, it was Schumacher who emerged on pole position ahead of title rival Kimi Räikkönen, while Juan Pablo Montoya and Nick Heidfeld shared the second row.[1]

The weather remained stable on race morning, although a threat of rain would prompt Fernando Alonso and Renault to swap to their spare car, at the cost of starting from the pitlane.[1] There was late drama for Räikkönen too, the McLaren-Mercedes squad getting permission to change his engine, before two starts were aborted due to an electrical issue for Cristiano da Matta.[1]

At the third attempt the race would start, despite the fact that Jos Verstappen suffered a launch control issue and stalled, leaving him stranded as the rest of the field streaked away.[1] Out front, meanwhile, Schumacher would sprint clear to claim an early lead, while Montoya slid inside Räikkönen to secure second.[1]

With Verstappen stuck the safety car was called, staying out for four laps as the Minardi-Ford Cosworth was dragged away.[1] When the race resumed Schumacher would immediately break away, leaving Montoya to fend off Räikkönen as the skies in the Styrian mountains began to darken.[1]

Indeed, by lap eleven the first spots of rain would fall onto the circuit, catching out Jarno Trulli who completed a pirouette at turn one.[1] However, there was no where near enough water to require the use of wet tyres, with Rubens Barrichello beginning the first pitstop phase on lap 22.[1]

An issue for the Brazilian saw Ferrari have to swap to their spare fuel rig, with Schumacher stopping a lap later.[1] This time some errant fuel was sprayed onto the #1 Ferrari's rear bodywork as the car was refuelled, which immediately ignited.[1] Fortunately the fire was small and extinguished quickly, although Schumacher lost valuable seconds and had question marks over how much fuel he had received.[1]

The German ace duly rejoined in third behind Räikkönen and Montoya on heavy fuel loads, although it was not long before the #1 Ferrari reclaimed second from the #6 McLaren.[1] Indeed, Räikkönen's pace was steadily deteriorating as his Mercedes engine began to lose power, while Montoya's race was ended when his BMW engine failed.[1]

Schumacher was hence left on his own out front, while Räikkönen had to doggedly defend second from Barrichello.[1] Ultimately, however, there would be no late changes to the order, leaving Schumacher the victor, Räikkönen two points ahead in the Championship, and Barrichello completing the podium.[1]

This would be the last Austrian Grand Prix to be held until F1 returned to the renamed Red Bull Ring in 2014.

A second victory in a row for Michael Schumacher carried the German ace right to the head of the field, leaving him just four off the lead after a slow start. Indeed, a non-score for Kimi Räikkönen had left him looking vulnerable at the head of the pack, with Fernando Alonso also moving within striking distance in third. Elsewhere, David Coulthard had slipped to fifth behind Rubens Barrichello, with sixteen drivers on the scoresheet.

In the Constructors Championship it had been a very strong afternoon for Ferrari, as they demolished the gap between themselves and early leaders McLaren-Mercedes. The double failure to score in Spain had been very costly for the Anglo-German alliance, leaving them just three ahead of the Scuderia as their strong start to the season faded. Behind, Renault had kept Williams-BMW at bay, while Minardi-Ford Cosworth were left as the only non-scorers.

The full entry list for the 2003 Austrian Grand Prix is outlined below:

The full qualifying results for the 2003 Austrian Grand Prix are outlined below:

The full results for the 2003 Austrian Grand Prix are outlined below:

Kimi Räikkönen just held onto his Championship lead after the battle of Austria, albeit with his advantage now cut to just two points. Indeed, a third win in succession for Michael Schumacher had left the German ace just behind the Finn at the head of the field, with clear air between themselves and third placed Rubens Barrichello. Behind, Fernando Alonso had lost ground after his non-score, as had David Coulthard in fifth.

In the Constructors Championship Ferrari had finally taken the lead in the title hunt, moving a point ahead of former leaders McLaren-Mercedes. The Anglo-German squad remained optimistic, however, given that they were still racing a modified version of their 2002 car, and had a lot of ground in-hand between themselves and third placed Renault. The French manufacturer themselves were level on 35 points with Williams-BMW, while Minardi-Ford Cosworth remained at the foot of the table as the only pointless team.