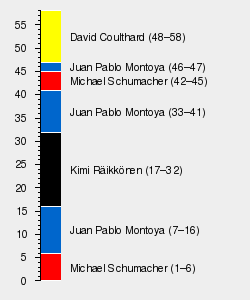 The 2003 Australian Grand Prix, officially the 2003 Foster's Australian Grand Prix, was the opening round of the 2003 FIA Formula One World Championship, staged at the Albert Park Circuit in Melbourne, Australia, on 9 March 2003.[1] The race, which saw several new rules implemented to try to create closer Championship/race battles, would see Michael Schumacher and Ferrari open their respective title defences.[1]

Over the winter of 2002 there had been several moves by the FIA to limit Ferrari's dominance, primarily by revising the points scoring system to award points down to eighth place.[1] Qualifying also received a format change, now down to two one-lap runs, while the lower placed teams in the Championship were given permission to run third cars in practice in order to increase the amount of data/development they could achieve.[1]

On the driver front, meanwhile, it had been a fairly stable winter, with no changes at either Ferrari, McLaren-Mercedes nor Williams-BMW.[1] Further down there were several swaps for F1's next generation of drivers, with Fernando Alonso joining Renault, Jenson Button moving to BAR-Honda and Mark Webber taking a seat at Jaguar-Ford Cosworth.[1]

Unfortunately qualifying would seem to show that the FIA's plans had failed, for Schumacher would lead teammate Rubens Barrichello to a dominant front-row lock-out for the Scuderia, almost a second clear of third placed Juan Pablo Montoya.[1] Behind, Heinz-Harald Frentzen, in the Ferrari engined Sauber-Petronas secured fourth ahead of Olivier Panis' Toyota, while the two McLarens of David Coulthard and Kimi Räikkönen were down in eleventh and fifteenth respectively.[1]

Yet come race day there were hopes of a fight, for a turbulent weather system swept over Melbourne, bringing rain and a choice of wet or slick tyres.[1] Ultimately the majority of the field would opt for wets, although Räikkönen notably abandoned his wets, and fifteenth on the grid, for slicks at the end of the formation lap.[1]

The start itself proved very clean, with Barrichello almost beating Schumacher, albeit only because he had jumped the lights.[1] They duly emerged in formation at the head of the field, and quickly built a gap over Montoya, while the rest of the field scrambled through without issue.[1]

Barrichello was soon slapped with a penalty, although that would become academic as the Brazilian crashed out of the race early on.[1] By that stage the damp circuit was drying rapidly, prompting Schumacher to pit moments before the Safety Car appeared after quick-fire accidents for Ralph Firman and Cristiano da Matta.[1]

Webber would retire soon after the restart with a suspension failure, bringing out a second safety car that further shuffled the field as drivers swapped to slicks.[1] That left Montoya in the lead ahead of Räikkönen and Schumacher, with Jarno Trulli and Coulthard completing the top five.[1]

Montoya established a lead at the restart, although Räikkönen would briefly lead amid a second round of stops in the latter half of the race.[1] The Finn was subsequently slapped with a drive-through penalty for pitlane speeding, rejoining in time to duel with Schumacher, and ultimately force the German racer into a bargeboard breaking bounce across the grass.[1]

Into the closing stages and Coulthard moved into striking position behind Montoya, although it was only when the Colombian spun on his own at turn one that the Scot claimed the lead.[1] With that the race was won, with Coulthard easing away to secure victory ahead of Montoya, with Räikkönen completing the podium.[1] Schumacher, Trulli and Heinz-Harald Frentzen claimed the remaining points.[1]

Incredibly, the 2003 Australian Grand Prix was the first race since the 2001 Italian Grand Prix that Schumacher had not finished on the podium.[1] It also marked the end of a 53 race podium streak for Ferrari, and would be the final victory for Coulthard in F1.[1]

The full entry list for the 2003 Australian Grand Prix is outlined below:

The full qualifying results for the 2003 Australian Grand Prix are outlined below:

The full results for the 2003 Australian Grand Prix are outlined below:

Victory on the opening day left David Coulthard at the head of the early hunt, two points ahead of Juan Pablo Montoya as a result of the revised points scoring scheme. Kimi Räikkönen was next ahead of defending Champion Michael Schumacher, while Jarno Trulli completed the top five. The rest of the opening day scorers were Heinz-Harald Frentzen, Fernando Alonso and Ralf Schumacher.

In the Constructors Championship it was McLaren-Mercedes who led the early charge, a double podium putting them on 16 points after the opening bout. Williams-BMW were next up on nine ahead of Renault, with Ferrari and Sauber-Petronas the only other scorers.