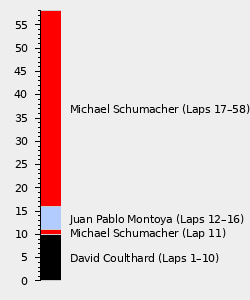 The 2002 Australian Grand Prix, officially known as the LXVII Foster's Australian Grand Prix was the opening round of the 2002 FIA Formula One World Championship, which took place at the Albert Park Circuit in Melbourne, Australia, on 3 March 2002.[1] The race would see defending Champion Michael Schumacher claim victory for Ferrari, after a spectacular collision at the start removed two of his rivals.[1]

There had been several high profile changes to the field over the winter, with the notable addition of Toyota to the field, with the Japanese manufacturer hiring Mika Salo and Allan McNish to race for them.[1] They replaced the out-going Prost team, while Renault completed their take over of Benetton, marking their return to the F1 field as a constructor for the first time since the 1985 Australian Grand Prix.[1]

Elsewhere, two-time Champion Mika Häkkinen had opted to take a "sabbatical" for the foreseeable future, prompting McLaren-Mercedes to sign Kimi Räikkönen to their squad.[1] His seat at Sauber was subsequently taken by Ferrari junior driver Felipe Massa, while Mark Webber and Takuma Sato would also make their F1 debuts at Minardi and Jordan respectively.[1]

However, when it came to qualifying it would be the two Ferraris that dominated the field as they had in 2001, with Rubens Barrichello taking pole ahead of Schumacher.[1] Almost half a second then followed before Ralf Schumacher appeared in third on the grid for Williams-BMW, while David Coulthard of McLaren completed the second row ahead of his new teammate.[1]

All of that would be overshadowed at the start of the race itself, for Ralf Schumacher made a stunning start to streak ahead of his brother and challenge Barrichello for the lead.[1] However, the Brazilian would catch both himself and the #5 Williams pilot out at the first corner, braking earlier than expected right in-front of the German's car.[1]

Schumacher was subsequently catapulted over the back of the Ferrari, getting airborne before crashing down in the barriers a 100m away, while Barrichello slid to a stop in the middle of the circuit.[1] The rest of the field took avoiding action, until Giancarlo Fisichella caused a multi-car pile-up when he jinked into the path of Nick Heidfeld.[1]

Ten drivers were suddenly seen sprinting back to the pit lane, anticipating that the race would be stopped given the amount of damaged equipment abandoned on circuit and hence allow them to start in their spare cars.[1] However, with no injury concerns race director Charlie Whiting instead opted to cover the clear-up of the circuit under the Safety Car, and hence meant that none of the ten drivers could rejoin.[1]

On-track, meanwhile, the chaos of the start had resulted in Coulthard leading from Jarno Trulli, Juan Pablo Montoya and Michael Schumacher, while Räikkönen made a long stop to have debris removed from his car.[1] He rejoined at the back of the field in time for the restart, which came at the start of lap five.[1]

Coulthard duly aced the restart to claim an early lead, while Schumacher pounced on a slide from Montoya to grab third.[1] Trulli subsequently put up a ferocious defence of second until lap nine, when he slid onto oil at Jones Corner and slammed into the barriers prompting another safety car period.[1]

Two laps later and the race resumed, with Coulthard initially able to break away, only to miss a gear into Prost corner and slide onto the grass.[1] Schumacher duly swept past to the claim the lead as the Scot tumbled to fifth, with Montoya and Räikkönen completing the top three.[1]

That, ultimately, was how it stayed at the head of the field, with Schumacher able to eek out an eighteen second lead by the end of the race as he claimed victory.[1] Montoya duly claimed second ahead of Räikkönen, who secured his maiden podium finish, with Eddie Irvine, Australian born Webber, and Salo claiming the remaining points.[1]

Heading into the first round of the 2002 season, many teams stuck with the same lineup that they had in 2001. With the only real change being Kimi Räikkönen heading to McLaren with him replacing Mika Häkkinen. In the constructors area, Toyota debut in the F1 as the development of the previous year.

The full entry list for the 2002 Australian Grand Prix is outlined below:

The full qualifying results for the 2002 Australian Grand Prix are outlined below:

The full results for the 2002 Australian Grand Prix are outlined below:

For a third season in succession defending Champion Michael Schumacher opened his title defence with victory in Australia, and hence left the opening round of the season at the head of the field. Juan Pablo Montoya, meanwhile, would start the season with a second place ahead of Kimi Räikkönen, while Eddie Irvine appeared in the top five for the first time since leaving Ferrari. Completing the first round scorers were Mark Webber and Mika Salo.

Ferrari had claimed victory and the Championship lead at the opening round for a fourth successive season courtesy of Schumacher, and hence started the season on ten points. Williams-BMW were next ahead of McLaren-Mercedes, while Jaguar-Ford Cosworth, Minardi-Asiatech and Toyota had also registered points. For Minardi it was also a significant first points score since the 1999 European Grand Prix.