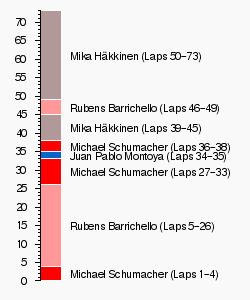 The 2001 United States Grand Prix, officially advertised as the 30th SAP United States Grand Prix, was the sixteenth and penultimate round of the 2001 FIA Formula One World Championship, held on 30 September 2001 at the Indianapolis Motor Speedway in Indiana, USA.[1] The race would see Mika Häkkinen claim his twentieth and final Grand Prix victory for McLaren-Mercedes, in what was the first international sports event to be staged in the United States after the September 11 2001 Attacks.[1]

Qualifying for the race would see Michael Schumacher beat brother Ralf to pole position, the Ferrari and Williams-BMW pilots exchanging fastest laps throughout.[1] Juan Pablo Montoya was next ahead of Häkkinen, with the Finn having originally split the Schumachers before his fastest time was deleted for ignoring a red light during practice.[1]

The start saw Montoya get a barnstorming start, sweeping outside the two Schumachers to challenge Michael for the lead into turn one, before the scarlet Ferrari aggressively seized the lead in turn two.[1] Behind, Rubens Barrichello also sprinted away to claim third from Ralf Schumacher, leaving Häkkinen in fifth battling with his teammate David Coulthard.[1]

It was Barrichello who emerged as the man to watch in the early laps, with the Brazilian first taking second from Montoya, before charging past teammate Michael Schumacher to claim the lead.[1] The Brazilian ace duly sprinted clear to build a lead, although it quickly became clear that he was on a far lighter fuel load than anyone else.[1]

Indeed, by the time Barrichello made his first stop on lap 27 he had established a thirteen second lead, rejoining in fifth behind the two McLarens, which had both taken Ralf Schuamcher.[1] Out front, meanwhile, Michael Schumacher suddenly found himself having to defend heavily from Montoya, whose Michelin tyres had finally come alive mid-stint.[1]

Montoya's lunge for the lead came at the start of lap 35, with the Colombian ace diving inside of Schumacher as they came to lap Alex Yoong.[1] Once ahead the #6 Williams eased clear at two seconds a lap, before sweeping into the pits on the following tour.[1]

Unseen amid all the fighting was the pace of Häkkinen, who had eased clear of teammate David Coulthard and was on for a long one-stop strategy.[1] He duly led from lap 39, when Schumacher stopped, until lap 46, rejoining in second, before retaking the lead from Barrichello when the Brazilian made his second stop.[1]

Barrichello rejoined in second, and with fresh tyres quickly demolished the Finn's lead, erasing all bar two seconds from it with twelve laps to go.[1] Yet, as the Brazilian began to contemplate a move his Ferrari engine began to emit smoke, before failing completely ten laps later.[1]

With at the race for victory was over, with Häkkinen able to cruise home in the closing stages to claim his final F1 win.[1] Behind, Schumacher just managed to keep Coulthard at bay for third, with Montoya's bid for victory having been ended by a hydraulic failure shortly after his stop.[1] The remaining point were shared between Jarno Trulli, Eddie Irvine and Nick Heidfeld.[1]

Michael Schumacher had continued to extend his unassailable lead in the Championship despite missing out on a podium finish, leaving Monza 50 points clear. David Coulthard remained in second, although his margin over Rubens Barrichello had been sliced to just three points with two races to go, the Scot's failure to score costing him valuable points. Ralf Schumacher had also made ground to make it a three-horse race, while Juan Pablo Montoya had moved back into the top five with his maiden win.

In the Constructors Championship Ferrari had also boosted their title winning margin, leaving their home race with an 80 point advantage. McLaren-Mercedes were still in second after a rare pointless race, although Williams-BMW had made some serious ground, ending the weekend just eight behind with 32 points left to fight for. Behind, Sauber-Petronas had retained fourth ahead of BAR-Honda, with Jordan-Honda slipping a point behind the latter.

The full entry list for the 2001 United States Grand Prix is outlined below:

The full practice results for the 2001 United States Grand Prix are outlined below:

The full qualifying results for the 2001 United States Grand Prix are outlined below:

The full results for the 2001 United States Grand Prix are outlined below:

Michael Schumacher moved onto 113 points at the head of the Championship as a result of the US Grand Prix, having once again enhanced his title winning margin. David Coulthard, meanwhile, had all but secured second, although the Scot could fall behind third placed Rubens Barrichello if the Brazilian claimed victory in Japan. Behind, Ralf Schumacher was set to finish either fourth or third, while Mika Häkkinen had moved back into the top five with his win.

In the Constructors Championship Ferrari had seen their title winning margin reduced in Indianapolis, despite moving onto 167 points for the campaign. Indeed, McLaren-Mercedes had inched closer to their out-of-sight rivals, although they had, more significantly, secured second in the Championship with a race to spare. Williams-BMW had slipped 22 points behind ahead of the finale in Japan, so would have to settle for third despite having the strongest engine in the field.