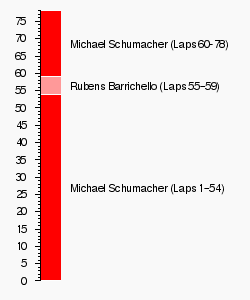 The 2001 Monaco Grand Prix, otherwise officially known as the LIXe Grand Prix de Monaco, was the seventh round of the 2001 FIA Formula One World Championship, staged on 27 May 2001 at the Circuit de Monaco in Monte Carlo, Monaco.[1] The race would not be remembered as a classic, as Michael Schumacher claimed a dominant victory ahead of teammate Rubens Barrichello as the two McLaren-Mercedes faltered.[1]

Indeed, it had been David Coulthard, Schumacher's main title rival, who had seized pole position in qualifying, beating the #1 Ferrari by two tenths.[1] Mika Häkkinen then shared the second row with Barrichello, while Ralf Schumacher secured fifth ahead of Eddie Irvine in the Jaguar-Ford Cosworth.[1]

However, Coulthard's hopes of continuing his win streak would be destroyed before the race even began, with a launch control system failure on the formation lap causing him to stall.[1] That forced the Scot to start from the back of the grid once McLaren got him started, effectively gifting Michael Schumacher an opposed run into Sainte Devote.[1]

That, ultimately, proved to be the case, with the #1 Ferrari immediately streaking into the lead when the race began, with Häkkinen trying to hang on in second.[1] Behind, Barrichello shadowed them in third, while Irvine tried to make an ambitious outside lunge on Ralf Schumacher to grab fourth, only to be passed by Schumacher's Williams-BMW teammate Juan Pablo Montoya.[1]

The rest of the opening lap saw Coulthard make some minor group at the back of the field, picking up a place when Nick Heidfeld was bounced into the barriers at Portier by Enrique Bernoldi.[1] Otherwise, there was little change in the early stages, with Michael Schumacher easing away from Häkkinen, while Barrichello led the two Williams'.[1]

The fight for the lead soon became an exchange of fastest laps, before Häkkinen began to sense that something was wrong with his steering, causing his McLaren to ease to the right.[1] On lap thirteen the issue worsened as he ran through the tunnel, allowing Barrichello to streak past and claim second into the Nouvelle Chicane, despite the fact that the Brazilian was braking earlier than usual due to cramp.[1]

Häkkinen ultimately abandoned third at the end of the lap for a quick diagnosis in the McLaren pitbox, where no issues were found.[1] Yet, just two laps later the Finn was back in to retire as the issue persisted, leaving Ralf Schumacher in third ahead of Montoya, while Michael Schumacher continued to build a huge lead.[1]

With that the fight for victory was over, with Schumacher only losing the lead for four laps during the pitstop window as Barrichello stayed out longer.[1] Behind, however, there would be some intense fighting between the two Williams and Irvine for third, although that would be settled by mechanical strife for the two Williams long before the end of the race.[1]

Barrichello steadily closed up onto the back of Schumacher in the closing laps, with Ferrari almost staging a dead heat as the pair flashed across the line.[1] Ultimately, however, it was Schumacher's victory half a second ahead of the Brazilian, with Irvine in third to claim Jaguar's maiden F1 podium finish.[1] Jacques Villeneuve ran out of time to catch the Ulsterman and so had to settle for fourth, while Coulthard secured fifth late on to keep his title hopes alive.[1]

There was a change to the off-track personnel ahead of the Monaco Grand Prix, as injury prevented Bernd Mayländer for serving as the Safety Car driver, the first time he had missed a Grand Prix since obtaining the role in 2000.[2] He was replaced by fellow Mercedes Deutsche Tourenwagen Masters and factory driver Marcel Fässler, while also missing out on several races in the DTM.[2] Fässler, meanwhile, had also signed to be a test driver with McLaren-Mercedes for 2001, fresh from claiming his maiden DTM victory the weekend before.[2]

David Coulthard would leave Austria as a serious title contender after his second win of the campaign, moving onto 38 points after the opening third of the season. That left him just four behind Michael Schumacher after the late Ferrari swap, suggesting that the controversial switch was the correct call by the Scuderia. It did, however, mean that Rubens Barrichello fell twenty points behind the Scot in third, with Ralf Schumacher and Nick Heidfeld also losing ground.

In the Constructors Championship it had been an even day for Ferrari and McLaren-Mercedes at the head of the field, both having claimed ten points across the weekend. That meant that the former's lead remained a healthy eighteen points after six races, with a fair gap back to third placed Williams-BMW. Jordan-Honda were next, a point ahead of Sauber-Petronas, while Arrows-Asiatech had become the eighth constructor to claim a place on the score board.

The full entry list for the 2001 Monaco Grand Prix is outlined below:

The full qualifying results for the 2001 Monaco Grand Prix are outlined below:

The full results for the 2001 Monaco Grand Prix are outlined below:

Michael Schumacher extended his lead in the Drivers Championship as a result of the Monaco Grand Prix, leaving the Principality with 52 points to his credit. That left him twelve clear of closest challenger David Coulthard, with the Scot himself sixteen clear of Rubens Barrichello in third. The Brazilian himself ended the day with double the points of fourth placed Ralf Schumacher, with Nick Heidfeld still holding on to his top five status.

Ferrari, meanwhile, had claimed their second one-two of the campaign to move onto 76 points, leaving them in command of the Constructors Championship once again. Indeed, that result moved them 32 points clear of McLaren-Mercedes in second, who themselves held a 26 point advantage over third placed Williams-BMW. Jordan-Honda and BAR-Honda completed the top five, with points for Jaguar-Ford Cosworth and Prost-Acer meaning everyone bar Minardi-European had registered points in 2001.