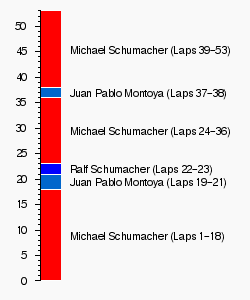 The 2001 Japanese Grand Prix, otherwise known as the XXVII Fuji Television Japanese Grand Prix (XXVII フジテレビ日本グランプリ in Japanese), was the seventeenth and final round of the 2001 FIA Formula One World Championship, staged at the Suzuka Circuit in Suzuka, Mie Prefecture, Japan, on 14 October 2001.[1] The race would see Michael Schumacher sweep to a dominant ninth victory of the season ahead of Juan Pablo Montoya, having originally intended to hand the lead to Ferrari teammate Rubens Barrichello.[1]

Qualifying for the season finale had seen Schumacher claim pole position, his eleventh of the season, ahead of Montoya's Williams-BMW.[1] Ralf Schumacher was third on the grid ahead of Barrichello, who was bidding to finish as runner-up in the Championship, with the two McLaren-Mercedes split by Giancarlo Fisichella.[1]

The start of the race saw a lot of discussion about the first corner, which had a history of collisions between aggressive drivers.[1] Indeed, the most widespread expectation was pole sitter Schumacher would make an aggressive lunge to the inside to prevent Montoya from diving inside him into the first corner, potentially causing them to trip over each other.[1]

That, ultimately, would be partially realised when the race did start, with the #1 Ferrari darting across the nose of the #6 Williams to claim the lead.[1] Yet, Montoya had the common sense to avoid getting entangled in a fight with the Ferrari, and hence settled into second ahead of Ralf Schumacher and Barrichello.[1]

As such it was down to Barrichello to provide some early entertainment, the Brazilian having gone for an aggressive three-stop strategy in his bid for victory.[1] He duly scythed past the two Williams, including a daring dive inside Ralf Schumacher on the inside of 130R, before chasing off after Michael Schumacher ahead.[1]

Indeed, as Barrichello battled the #1 Ferrari had simply disappeared at the head of the field, pulling out an eight second lead before the end of lap three.[1] Barrichello steadily closed on his two-stopping teammate, although he was forced to make his first stop on lap fifteen, rejoining in seventh.[1]

The Brazilian would once again find himself battling his way up the order, although this time he was aided by the fact that his opponents were beginning to pit for their first stops.[1] He duly climbed back to third behind Montoya before his second stop, dropping back to sixth, before again battling into the top three during the second round of stops.[1]

There would be some other changes to the order amid the Barrichello yo-yo battle, with the McLarens ultimately emerging in fourth and fifth, with David Coulthard crucially ahead of Mika Häkkinen.[1] That meant that even if Barrichello won the race the Scot would finish in second in the Championship, despite starting the final race outside of the points.[1]

Things only got better for the Scot when Barrichello's third and final stop dumped the Brazilian down to fifth, with the #2 Ferrari left with too much of gap between himself and the McLarens.[1] Out front, meanwhile, Michael Schumacher was left unopposed at the head of the field, maintaining a ten second gap between himself and Montoya in second.[1]

With that the race was run, in-spite of Montoya setting a series of quick laps in the final stages to reduce the gap to Schumacher.[1] Regardless, it was the German ace who claimed the final win of the season by three seconds from the Colombian, while Coulthard secured the runner-up spot in the Championship by completing the podium.[1] The remaining points were split between Häkkinen, making his final F1 appearance before a "sabbatical", Barrichello and Ralf Schumacher.[1]

Michael Schumacher moved onto 113 points at the head of the Championship as a result of the US Grand Prix, having once again enhanced his title winning margin. David Coulthard, meanwhile, had all but secured second, although the Scot could fall behind third placed Rubens Barrichello if the Brazilian claimed victory in Japan. Behind, Ralf Schumacher was set to finish either fourth or third, while Mika Häkkinen had moved back into the top five with his win.

In the Constructors Championship Ferrari had seen their title winning margin reduced in Indianapolis, despite moving onto 167 points for the campaign. Indeed, McLaren-Mercedes had inched closer to their out-of-sight rivals, although they had, more significantly, secured second in the Championship with a race to spare. Williams-BMW had slipped 22 points behind ahead of the finale in Japan, so would have to settle for third despite having the strongest engine in the field.

The full entry list for the 2001 Japanese Grand Prix is outlined below:

The full qualifying results for the 2001 Japanese Grand Prix are outlined below:

The full results for the 2001 Japanese Grand Prix are outlined below:

Michael Schumacher rounded out the 2001 FIA Formula One World Championship with a ninth victory and a record 123 point haul, which also resulted in him taking the title by the largest ever margin. Indeed, runner-up David Coulthard ended the season some 58 points off of the German ace, but outscored Rubens Barrichello by nine to claim his best ever Championship finish. Behind, Ralf Schumacher ended the season in fourth ahead of Mika Häkkinen, with eighteen drivers having registered points across the campaign.

In the Constructors Championship Ferrari would end their third straight title winning campaign on 179 points, which also translated into a huge winning margin. Rivals McLaren-Mercedes ended the season 77 points behind the Italian squad in second, although they did have a seemingly comfortable 22 point margin over Williams-BMW in third. Elsewhere, Sauber-Petronas and Jordan-Honda completed the top five, while Benetton-Renault and Prost-Acer left the series in seventh and ninth respectively.