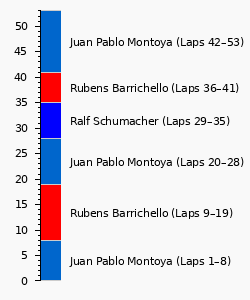 The 2001 Italian Grand Prix, otherwise known as the LXXII Gran Premio Campari d'Italia, was the fifteenth round of the 2001 FIA Formula One World Championship, staged at the Autodromo Nazionale Monza on the 16 September 2001.[1] The race would see Juan Pablo Montoya claim his maiden F1 victory at the wheel of his Williams-BMW FW23, defeating Ferrari on home soil.[1]

Montoya had been the man to watch from the start of the weekend, having swept to pole position in qualifying by three tenths.[1] Rubens Barrichello was next for Ferrari ahead of pre-crowned Champion Michael Schumacher, while Ralf Schumacher put the #5 Williams into fourth.[1]

Ahead of the race Michael Schumacher tried to organise a pact to prevent overtaking into the first chicane at the start, noting the death of Paolo Gislimberti the previous year, as well as Alex Zanardi's huge ChampCar accident in Germany earlier in the weekend.[2] His proposal would, however, be rejected by several drivers, including Jacques Villeneuve and the Benetton and Arrows bosses Flavio Briatore and Tom Walkinshaw.[1]

Regardless, it would be formation flying at the head of the field at the start, with Montoya storming into the lead of the race ahead of Barrichello and the Schumacher brothers, Ralf getting the jump on Michael.[1] Behind, Jarno Trulli was punted out of the race by Jenson Button, while Mika Häkkinen lost a huge amount of time having cut the first chicane.[1]

Late around the opening lap Michael Schumacher got back ahead of Ralf on the run to Lesmo, while Montoya powered away from Barrichello.[1] Yet, the Colombian's lead would not grow beyond a second, with the two black-nosed Ferraris, so liveried as a mark of respect for the victims of the World Trade Centre attack on September 11, stalking him as they eased clear of Ralf Schumacher.[1]

Indeed, Montoya was having to push his tyres very hard in the early laps to keep the Ferraris at bay, and duly developed a blister on a rear-tyre.[1] That proved significant on lap nine as the Colombian racer slid wide braking for the della Roggia chicane, and hence allowed Barrichello to sweep past to claim the lead.[1]

Barrichello quickly scampered clear over the following laps to leave Schumacher to harass Montoya, with the two Ferraris on a two-stop compared to Williams' one-stop.[1] Schumacher subsequently became the first stopper on lap eighteen, followed by Barrichello a lap later, handing the lead back to Montoya.[1]

Montoya's lone stop came on lap 28, with the Williams team adjusting his front wing after his complaints about oversteer throughout the stint.[1] He rejoined in third behind Barrichello as Ralf Schumacher inherited the lead, before he stopped on lap 35.[1]

The second round of stops for Ferrari saw Barrichello and Michael Schumacher both slip behind Ralf Schumacher, leaving Williams in one-two with ten laps to go.[1] Yet, Barrichello was right behind Ralf after leaving the pits, and with fresher tyres duly managed to dive past the German ace with five laps to spare, before sprinting off after Montoya.[1]

Yet, time would run out for Barrichello, meaning Montoya duly collected his maiden F1 victory by over five seconds.[1] Barrichello and Ralf Schumacher hence completed the podium ahead of a quiet Michael Schumacher, with the remaining points heading to Pedro de la Rosa and Villeneuve.[1]

Michael Schumacher broke through the 100 point barrier with his eighth win of the campaign in Belgium, the already crowned Champion leaving Spa with 104 points. David Coulthard, meanwhile, had managed to gain a firmer grip on second, moving nine clear of Rubens Barrichello in third, and thirteen clear of fourth placed Ralf Schumacher. Mika Häkkinen, meanwhile, was set for a lonely fifth place in the Championship, with Juan Pablo Montoya in sixth.

In the Constructors Championship Ferrari had moved onto 152 points for the season, having extended their already unassailable lead. McLaren-Mercedes were still in second, leaving Belgium on 81 points, with a 22 point advantage over Williams-BMW with three races to go. Those two were now in a private duel for the runner-up spot, with Sauber-Petronas unable to catch the former squad in fourth.

The full entry list for the 2001 Italian Grand Prix is outlined below:

The full qualifying results for the 2001 Italian Grand Prix are outlined below:

The full results for the 2001 Italian Grand Prix are outlined below:

Michael Schumacher had continued to extend his unassailable lead in the Championship despite missing out on a podium finish, leaving Monza 50 points clear. David Coulthard remained in second, although his margin over Rubens Barrichello had been sliced to just three points with two races to go, the Scot's failure to score costing him valuable points. Ralf Schumacher had also made ground to make it a three-horse race, while Juan Pablo Montoya had moved back into the top five with his maiden win.

In the Constructors Championship Ferrari had also boosted their title winning margin, leaving their home race with an 80 point advantage. McLaren-Mercedes were still in second after a rare pointless race, although Williams-BMW had made some serious ground, ending the weekend just eight behind with 32 points left to fight for. Behind, Sauber-Petronas had retained fourth ahead of BAR-Honda, with Jordan-Honda slipping a point behind the latter.