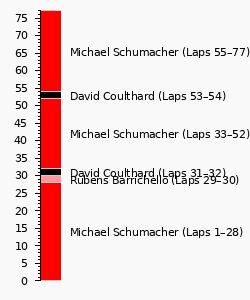 The 2001 Hungarian Grand Prix, otherwise officially known as the XVII Marlboro Magyar Nagydij, was the thirteenth round of the 2001 FIA Formula One World Championship, staged on 19 August 2001 at the Hungaroring near Budapest, Hungary.[1] The race would see Michael Schumacher claim his fourth World Championship title with victory, and equal the race wins record set by fellow four-time Champion Alain Prost.[1]

Qualifying had seen Schumacher grab his ninth pole position of the season, with title rival David Coulthard lining up alongside.[1] Behind, Rubens Barrichello put the sister Ferrari into third ahead of Ralf Schumacher, while Mika Häkkinen claimed sixth behind Jarno Trulli of Jordan-Honda.[1]

Ultimately the Championship, and indeed the race, would be decided at the start, for the scarlet Ferraris aced their getaways on the clean side of the grid, while Coulthard struggled in the dust.[1] That meant that Barrichello instantly sprinted past the #4 McLaren-Mercedes to claim second, with Michael Schumacher claiming an unopposed lead.[1]

Elsewhere Eddie Irvine spun himself into the gravel while battling Giancarlo Fisichella, while Tarso Marques bounced off of Heinz-Harald Frentzen further around the lap.[1] Otherwise the opening lap proved fairly clean, with Schumacher quickly building a 1.3 second lead over Barrichello.[1]

The two Ferraris and Coulthard would soon pull clear of the rest of the field, led by Ralf Schumacher, with the German occupied fending off Trulli and Häkkinen.[1] Ultimately, however, he too would break clear to lead Trulli at the head of a train of cars, with Häkkinen, Nick Heidfeld, Juan Pablo Montoya and Kimi Räikkönen glued to his tail.[1]

Out front, meanwhile, inter-team tactics had come into force at Ferrari, with Barrichello easing his pace to block Coulthard, and hence allow Michael Schumacher to escape by almost a second a lap.[1] The German ace duly delivered a series of quick laps before his pit stop, rejoining in a solid third ahead of his brother Ralf, but only a handful of seconds behind Barrichello and Coulthard.[1]

The Brazilian racer would frustrate the Scot through until the end of lap 31, before making his stop, only for Coulthard to pit on the next lap and leapfrog him with a quicker stop.[1] Now clear the #4 McLaren began eating its way into the #1 Ferrari's lead, although as soon as Coulthard broke into the eleven second barrier his progress stalled.[1]

Schumacher made his second stop on lap 52, rejoining behind Barrichello to hand the lead, briefly to Coulthard, who was set to finish second regardless.[1] That was, until a refuelling issue cost the Scot several seconds in the pitlane, and hence gifted Barrichello the place back as the #4 McLaren rejoined in third.[1]

With that the race, and the Championship, was over, with Schumacher cruising across the line to claim victory and the crown, matching Prost's tally of four titles and 51 wins.[1] Barrichello's second place, meanwhile, ensured that the Scuderia claimed the Constructors Championship for a third successive season, Coulthard's spot on the podium not enough to keep McLaren in the hunt.[1] Behind, Ralf Schumacher, Häkkinen and Heidfeld claimed the remaining points, having broken clear of the Trulli train when the Italian racer's hydraulics failed.[1]

With neither Championship leader Michael Schumacher and David Coulthard managing to score there had be no change atop the Drivers Championship, although that worked in favour of the former as it meant there were just five races left in the campaign. Indeed, Schumacher's 37 point advantage looked even more daunting with just 50 points left to fight for, and meant that he could win the Championship in Hungary if he out-scored Coulthard by four points. Behind, Ralf Schumacher had moved back into third with victory, overhauling Rubens Barrichello, while Mika Häkkinen completed the top five.

In the Constructors Championship Ferrari had inched closer to retaining their crown, leaving Germany with a 58 point lead. McLaren-Mercedes remained their closest challengers, although they were more in a fight for second than the Championship as the season entered its final phase, for Williams-BMW had cut the gap between them to just ten points. Elsewhere, Benetton-Renault had moved up into seventh, while BAR-Honda overtook Jordan-Honda to claim a top five spot.

The full entry list for the 2001 Hungarian Grand Prix is outlined below:

The full qualifying results for the 2001 Hungarian Grand Prix are outlined below:

The full results for the 2001 Hungarian Grand Prix are outlined below:

Given his dominance across most of the campaign there was little surprise that Michael Schumacher had wrapped up the title in Hungary, claiming the crown with four races to spare. Closest challenger David Coulthard would therefore face a fight to hold second for the rest of the season, with Rubens Barrichello and Ralf Schumacher both closing to within seven points of the Scot with 40 left to fight for. Behind, Mika Häkkinen was a distant fifth ahead of Juan Pablo Montoya, with eighteen drivers on the scoresheet.

Likewise, Ferrari had wrapped up the Constructors Championship for the eleventh time after their one-two in Hungary, moving onto 140 points for the campaign. That left them an unassailable 68 ahead of McLaren-Mercedes in second with four rounds to go, with the Anglo-German squad instead set to battle for the runner-up spot during the remaining races. Williams-BMW were, however, their only threat, and would leave Hungary thirteen behind their compatriots.