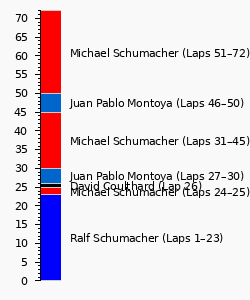 The 2001 French Grand Prix, officially advertised as the LXXXVII Mobil 1 Grand Prix de France, was the tenth round of the 2001 FIA Formula One World Championship, staged at the Circuit de Nevers Magny-Cours in Magny-Cours, France, on 1 July 2001.[1] The race would see Michael Schumacher secure his 50th Grand Prix victory, in a race that would otherwise have gone down as a footnote in F1 history.[1]

Qualifying had suggested that there would be another tight battle for victory, as Ralf Schumacher out-paced his brother to claim pole position from Michael.[1] David Coulthard was next ahead of his McLaren-Mercedes teammate Mika Häkkinen, with less than a second covering the entire top eight.[1]

Unfortunately hopes of a battle-royale for victory were weakened before the start, with Häkkinen stalling on the formation lap and duly retiring with a gearbox failure.[1] Ralf Schumacher then aced his start to grab an early lead, while even a small glitch in Michael Schumacher's launch was not enough to let Coulthard challenge for second.[1]

Indeed, it was an out-of-place Rubens Barrichello who was the man to watch on the opening lap, charging from eighth to fifth after a poor run in qualifying.[1] Kimi Räikkönen was another man on the march, barging into the top ten, while Juan Pablo Montoya passed Jarno Trulli to claim fourth moments before Barrichello's flying Ferrari caught him.[1]

Montoya and Barrichello engaged in a low-key duel for fourth, allowing the top three of Schumacher, Schumacher and Coulthard to establish a small gap.[1] Yet, there would be no attempts to overtake from either the scarlet Ferrari nor the silver-black McLaren, meaning it was a stalemate at the head of the field throughout the early stages.[1]

The pitstop window would finally shake-up the order out front, with a poor stop for Ralf Schumacher, caused by him engaging first gear too soon, dropped him back behind his brother.[1] That, however, was the only change, until Coulthard was handed a ten second stop-go penalty for speeding in the pitlane, dumping him down to fifth behind Montoya and Barrichello.[1]

As the race wore on Ralf Schumacher began to complain about balance issues with his car, resulting in him dropping back from Michael and instead into the grips of teammate Montoya.[1] The Williams-BMW squad duly decided to swap the pair around, although a radio issue meant that the German racer had to be called in for his stop earlier than planned to get the swap made.[1]

That, however, proved academic, for just three laps after making his second stop, Montoya's race came to an end with smoke pouring out of his exhausts.[1] Ralf Schumacher was hence put back into second, while behind Coulthard had begun to close onto the back of Barrichello, only to waste his best chance at passing the Ferrari late-on when he dived the wrong side of a lapped Jean Alesi.[1]

With that the race was over, with Michael Schumacher cruising across the line to claim his landmark win ahead of his brother.[1] Barrichello duly fended off Coulthard to complete the podium, while Trulli and Nick Heidfeld claimed the remaining points.[1]

The full entry list for the 2001 French Grand Prix is outlined below:

The full qualifying results for the 2001 French Grand Prix are outlined below:

The full results for the 2001 French Grand Prix are outlined below:

Michael Schumacher moved ever closer to his fourth World Championship crown with victory in France, leaving Magny-Cours with a daunting 29 point lead. David Coulthard was still the closest thing to a threat to the German ace, although the Scot would likely need a drastic reversal of form in the final seven rounds to hope of challenging for the crown. Behind, Ralf Schumacher had overtaken Rubens Barrichello to claim third, while Juan Pablo Montoya retained his spot in the top five.

It was a similar story in the Constructors Championship, with Ferrari once again increasing their lead, ending the afternoon on 108 points. That meant they had almost double the number of McLaren-Mercedes in second, with the Anglo-German alliance slowly being caught by third placed Williams-BMW, the latter moving just thirteen behind after the battle of France. Behind, Sauber-Petronas had retained fourth ahead of Jordan-Honda, while Minardi-European had once again failed to register a points finish.