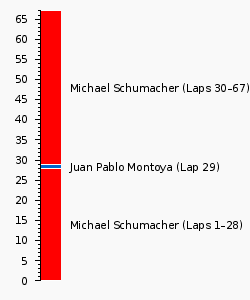 The 2001 European Grand Prix, otherwise officially known as the XLV Warsteiner Grand Prix of Europe, was the ninth round of the 2001 FIA Formula One World Championship, staged at the Nürburgring in Nürburg, Germany, on 24 June 2001.[1] The race would see Michael Schumacher sweep to victory for Ferrari, albeit after his brother Ralf was penalised for straying over the white line exiting the pitlane as they tussled for the lead.[1]

Qualifying had seen the former Schumacher claim pole position at the wheel of the #1 Ferrari, beating Ralf by a quarter of a second.[1] Ralf's teammate Juan Pablo Montoya, meanwhile, would beat Michael's teammate Rubens Barrichello to third, with the two McLaren-Mercedes sharing the third row.[1]

Ahead of the race Michael Schumacher elected to start in his spare car, only for a failure on a reconnaissance lap to see him abandon the car halfway around the lap, hike back to the pits, and switch back to his race car.[1] There was more drama on the formation lap as Tarso Marques stalled, although as the Brazilian was at the back of the field there was no change to the overall order.[1]

When the race did get underway it was an all Schumacher scrap for the lead, with Michael aggressively squeezing his brother towards the pitwall on the run to the first corner.[1] That allowed Montoya to look at passing the pair of them around the outside of the first corner, before deciding to back off as they hit the brakes.[1]

As the top three held station Barrichello found himself getting mugged by the two McLarens, while Jos Verstappen rocketed up from nineteenth to fourteenth.[1] The rest of the field would start without issue, although Barrichello would lose another place to Jarno Trulli in the first corner.[1]

The early stages saw the Schumacher brothers ease clear of Montoya, with the Colombian racer fending off David Coulthard for third.[1] Out front, meanwhile, the two Schumacher's would exchange several minor blows, before both settled down to let their respective strategies come into play.[1]

Yet, both Ferrari and Williams-BMW had opted for the same two-stop strategy, meaning both the #1 Ferrari and the #5 Williams came in on lap 28, with the elder Schumacher inadvertently running his brother onto the grass as they entered the pitlane.[1] They duly came out of their pitboxes nose-to-tail, Michael ahead, prompting Ralf to try an aggressive move as the emerged back onto the circuit.[1]

In a bid to attack his brother and remain ahead of a one-stopping Coulthard, Ralf shot to the left hand side of the circuit, crossing the white line that marked pit-out from the race circuit.[1] That resulted in an immediate ten-second stop-go penalty on safety grounds, which resulted in the younger Schumacher dropping back to fourth when he served it.[1]

That, ultimately, left Michael with command of the race, cruising home unopposed in the second half of the race to claim victory from Montoya.[1] Coulthard was a distant third to complete the podium ahead of Ralf Schumacher, with Barrichello and Mika Häkkinen claiming the remaining points.[1]

The full entry list for the 2001 European Grand Prix is outlined below:

The full qualifying results for the 2001 European Grand Prix are outlined below:

The full results for the 2001 European Grand Prix are outlined below:

Retrieved from "https://f1.fandom.com/wiki/2001_European_Grand_Prix?oldid=86569"
Community content is available under CC-BY-SA unless otherwise noted.