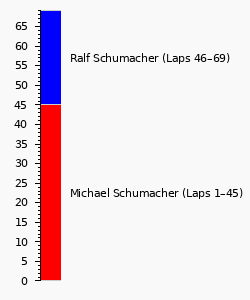 The 2001 Canadian Grand Prix, otherwise advertised as the XXXIX Grand Prix Air Canada, was the eighth round of the 2001 FIA Formula One World Championship, staged at the Circuit Gilles Villeneuve in Montreal, Canada, on 10 June 2001.[1] The race would see brothers Michael and Ralf Schumacher duel for victory, in a race ultimately decided by their respective tyre suppliers.[1]

Qualifying had seen Michael Schumacher clinch pole position by over half a second, with Ralf Schumacher securing second for Williams-BMW.[1] Championship pretender David Coulthard claimed third ahead of Jarno Trulli of Jordan-Honda, while home hero Jacques Villeneuve claimed ninth in his BAR-Honda.[1]

111,000 people turned up to watch the start of the race, which saw Michael Schumacher sweep ahead of Ralf to claim the lead for Ferrari, with the pair instantly pulling clear of Coulthard in third.[1] Elsewhere, Jos Verstappen made a barnstorming start on light fuel to gain seven places, while Rubens Barrichello elbowed Trulli out of the way a few corners later to claim fourth.[1]

Michael Schumacher would begin to build a lead in the early stages of the race, using his soft Bridgestone tyres to good effect.[1] However, as the first laps ticked away it was the Michelin tyres on Ralf Schumacher's Williams that gained the upper hand, allowing the #5 car to steadily close the gap back to the #1 Ferrari.[1]

As they began to squabble Barrichello barrelled past Coulthard for third and tried to stay with the lead duo, only to slip back towards Coulthard as the laps wore on.[1] The Brazilian subsequently spun after being forced to turn his traction control off after developing a misfire, dumping him back down the order.[1]

Ralf would begin to throw a few half lunges at his brother as the laps wore on, until the Safety Car was called upon to allow the battered #6 Williams of Juan Pablo Montoya to be extracted from the barriers.[1] After three laps the safety car was withdrawn and the race resumed, with Michael back on top as Ralf had picked up a lot of extra rubber during the SC period.[1]

Once again, the #5 Williams would take several laps to get its tyres up to speed, before demolishing the gap to the #1 Ferrari in the space of five laps.[1] This time Ralf began to force the issue and almost clinched the lead twice, before Michael dived into the pits on lap 46 for his one and only stop.[1]

Ralf stayed out for a further five laps, pushing as hard as he could with low fuel, and duly emerged six seconds clear of his brother after his stop.[1] Coulthard, meanwhile, would begin to close the gap to Michael Schumacher, only to suffer an engine failure due to rising water temperatures.[1]

With that the race was over, with Ralf Schumacher cruising across the line twenty seconds clear of his brother to claim victory, the two brothers becoming the first siblings to finish one-two in a World Championship Grand Prix.[1] Late chaos behind saw Mika Häkkinen emerge in third to complete the podium, with Kimi Räikkönen, Jean Alesi and Pedro de la Rosa claiming the remaining points.[1]

Michael Schumacher extended his lead in the Drivers Championship as a result of the Monaco Grand Prix, leaving the Principality with 52 points to his credit. That left him twelve clear of closest challenger David Coulthard, with the Scot himself sixteen clear of Rubens Barrichello in third. The Brazilian himself ended the day with double the points of fourth placed Ralf Schumacher, with Nick Heidfeld still holding on to his top five status.

Ferrari, meanwhile, had claimed their second one-two of the campaign to move onto 76 points, leaving them in command of the Constructors Championship once again. Indeed, that result moved them 32 points clear of McLaren-Mercedes in second, who themselves held a 26 point advantage over third placed Williams-BMW. Jordan-Honda and BAR-Honda completed the top five, with points for Jaguar-Ford Cosworth and Prost-Acer meaning everyone bar Minardi-European had registered points in 2001.

The full entry list for the 2001 Canadian Grand Prix is outlined below:

The full qualifying results for the 2001 Canadian Grand Prix are outlined below:

The full results for the 2001 Canadian Grand Prix are outlined below: