Formula 1 Wiki
Register
Don't have an account?
Sign In
Advertisement
in: 2001 Grands Prix, British Grand Prix, Formula One races in the United Kingdom 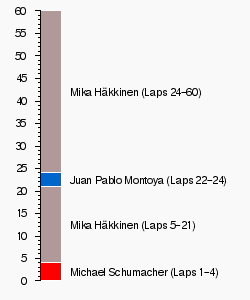 The 2001 British Grand Prix, otherwise officially known as the LIV Foster's British Grand Prix, was the eleventh round of the 2001 FIA Formula One World Championship, staged at the Silverstone Circuit in Northamptonshire, UK, on 15 July 2001.[1] The race would see Mika Häkkinen claim his first victory of the season, beating Championship leader Michael Schumacher in a straight fight.[1]

Qualifying had seen Schumacher claim pole position, albeit by less than a tenth from the Flying Finn in the #3 McLaren-Mercedes.[1] Title pretender David Coulthard was next ahead of Jarno Trulli and Heinz-Harald Frentzen, while Rubens Barrichello completed the top six in the second Ferrari.[1]

The start saw Schumacher fend off a bid from the lead from Häkkinen, while Coulthard received a smack in the back from Trulli that sent to Scot skating across the grass.[1] The two BAR-Hondas would also smack into each other, leaving Olivier Panis in the gravel next to Trulli, while Juan Pablo Montoya stormed into third from eighth on the grid.[1]

Schumacher and Häkkinen quickly built a gap over Montoya at the head of the field, with the Finn making several half-hearted lunges for the lead.[1] Behind, Coulthard had a spectacular off at Priory when his rear suspension collapsed, a legacy of his first corner contact, while Giancarlo Fisichella went for a trip across the Copse gravel trap while fighting with Fernando Alonso.[1]

Out front, meanwhile, Schumacher's resistance was finally broken on lap five, a mistake at Copse allowing Häkkinen to sweep his #3 McLaren inside the #1 Ferrari to claim the lead.[1] The Finn duly eased away over the following laps, leaving the German ace to slowly fall into the sights of third placed Montoya as the Colombian racer's Michelin tyres came to the fore.[1]

On lap fifteen Montoya was in position to strike, and duly sent his Williams-BMW scything past Schumacher's Ferrari into Stowe.[1] Yet, even clear of Schumacher Montoya lacked the pace to challenge Häkkinen, who continued to build his lead by over a second a lap.[1]

The reason for Häkkinen's impressive pace was the fact that he was on a two-stop strategy and lower fuel, and hence lost the lead to Montoya on lap 21, but crucially emerged ahead of Schumacher on a one-stop.[1] Montoya subsequently led for four laps before making his first stop, rejoining an intense fight between Ralf Schumacher and Barrichello for third before the former made his stop.[1]

Out front, meanwhile, Häkkinen would make his second stop on lap 39, joined in the pitlane by Michael Schumacher as he made his lone visit to the pits.[1] They duly rejoined in first and second with time in hand over Barrichello, who was now resisting the attacks of Montoya before they made their final visits to the pits.[1]

With that the race was run, with Häkkinen able to pull out a half minute lead over Schumacher to claim victory, his first of a disappointing campaign.[1] Barrichello, meanwhile, would escape from Montoya's clutches late on to complete the podium, with Kimi Räikkönen and Nick Heidfeld completing the points for Sauber-Petronas.[1]

Michael Schumacher moved ever closer to his fourth World Championship crown with victory in France, leaving Magny-Cours with a daunting 29 point lead. David Coulthard was still the closest thing to a threat to the German ace, although the Scot would likely need a drastic reversal of form in the final seven rounds to hope of challenging for the crown. Behind, Ralf Schumacher had overtaken Rubens Barrichello to claim third, while Juan Pablo Montoya retained his spot in the top five.

It was a similar story in the Constructors Championship, with Ferrari once again increasing their lead, ending the afternoon on 108 points. That meant they had almost double the number of McLaren-Mercedes in second, with the Anglo-German alliance slowly being caught by third placed Williams-BMW, the latter moving just thirteen behind after the battle of France. Behind, Sauber-Petronas had retained fourth ahead of Jordan-Honda, while Minardi-European had once again failed to register a points finish.

The full entry list for the 2001 British Grand Prix is outlined below:

The full qualifying results for the 2001 British Grand Prix are outlined below:

The full results for the 2001 British Grand Prix are outlined below:

Michael Schumacher moved onto 84 points for the campaign after his second place finish in Silverstone, ahead hence left the British circuit with a daunting 37 point lead. Indeed, with six races to go it seemed as if it was Schumacher's title to lose, with a non-score for David Coulthard on home soil potentially ending his bid for the crown. Behind, Rubens Barrichello had moved back ahead of Ralf Schumacher, while Mika Häkkinen climbed back into the top five after his first win of the campaign.

In the Constructors Championship Ferrari had effectively claimed the crown with six races to go, leaving Silverstone with 118 points to their credit. That translated into a 52 point lead over second placed McLaren-Mercedes, who were themselves twenty ahead of Williams-BMW in third, that gap having grown courtesy of Häkkinen's win. Behind, Sauber-Petronas had inched away from Jordan-Honda to enhance their claim to fourth, with no other changes to the order.