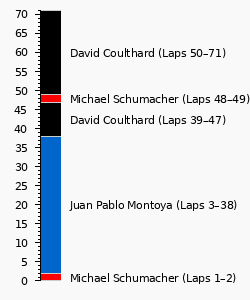 Qualifying would, as ever, see Championship leader Michael Schumacher claim his seventh straight pole position, sharing the front row with his brother Ralf, marking the first time that two siblings had locked out the top end of the field.[1] Mika Häkkinen was next for McLaren-Mercedes ahead of Juan Pablo Montoya, while home hero Rubens Barrichello would start from sixth behind Coulthard.[1]

There would, however, be confusion on the grid at the start, with Häkkinen stalling on the grid as the lights went out meaning the Safety Car was called upon instantaneously.[1] That, however, was not before Montoya had made a barnstorming start to grab second from his teammate Ralf Schumacher off the line, benefiting from a slow start from the German racer.[1]

The safety car duly stayed out for a lap before the Finn's car was dragged back to the pitlane, allowing the race to get fully underway.[1] Once again the man to watch was Montoya, who aced the restart beautifully to lunge inside Michael Schumacher for the lead into the Senna S, just as Barrichello removed himself from contention by rear-ending Ralf Schumacher a few yards behind.[1]

Montoya duly managed to build a small one second lead over the #1 Ferrari during the early stages, planning on a long first stint as dark clouds gathered over the circuit.[1] Schumacher duly stopped on lap 25, dropping half a minute behind the Colombian racer as Montoya upped his pace ahead of Coulthard.[1]

Indeed, many began to question whether Montoya would stop at all, with the #6 Williams-BMW starting lap 39 with no signs of life from his pitcrew.[1] Yet, his hopes of a maiden victory were ended a few moments later as he came through turn four, for Jos Verstappen would slam into the back of the Williams and destroyed both cars.[1]

Coulthard inherited the lead and duly made his stop, emerging a second or so ahead of Schumacher as the clouds above the Autódromo finally began to release their load.[1] Indeed, by lap 46 the clouds themselves seemed to have descended upon the circuit, prompting Schumacher to sweep in for intermediate Bridgestones, while Coulthard stayed out for an additional lap.[1]

That stop, which coincided with Schumacher's planned second, ensured that the German racer emerged back with the lead of the race, although Coulthard, who had made his one and only planned stop, rejoined within striking distance.[1] Schumacher then made a rare mistake and came to a sliding stop at turn four, allowing Coulthard to charge past a few moments later when they came to lap Tarso Marques.[1]

With that the race was over, with Coulthard easing away from the German ace to claim victory by over a quarter of a minute, a stark contrast to the Malaysian Grand Prix a fortnight earlier.[1] Behind, Nick Heidfeld battled into third and his maiden podium finish ahead of Olivier Panis, while Jarno Trulli and Giancarlo Fisichella completed the point scorers having had several adventures of their own.[1]

A second victory in two races in 2001 had left Michael Schumacher with command in the Championship after the opening two rounds, leaving Malaysia with a full twenty points to his name. That translated into a ten point advantage over the men in second, with David Coulthard and Rubens Barrichello level on ten points after a second and third place finish apiece. Heinz-Harald Frentzen and Nick Heidfeld then completed the top five, with eight drivers on the score sheet.

In the Constructors Championship Ferrari had also established a strangle hold after the opening two rounds, leaving Malaysia with 30 points in their grasp. McLaren-Mercedes were their closest challengers, but were already nineteen points behind after just two races, and with a seemingly inferior car. Behind, Jordan-Hart completed the early top three ahead of Sauber-Petronas, with Williams-BMW the only other scorers.

The full entry list for the 2001 Brazilian Grand Prix is outlined below:

The full qualifying results for the 2001 Brazilian Grand Prix are outlined below:

The full results for the 2001 Brazilian Grand Prix are outlined below:

Victory for David Coulthard had not only ended Michael Schumacher's six race unbeaten run, but also ensured that the Scot made valuable ground in the Championship hunt. Indeed, Coulthard would leave Brazil just six points behind the German ace, and move ten clear of Rubens Barrichello in third. Behind, Nick Heidfeld had moved back into fourth ahead of Heinz-Harald Frentzen, with eleven drivers on the score sheet after the opening three rounds.

In the Constructors Championship it was still advantage Ferrari after the opening three rounds, the Scuderia leaving Brazil on 36 points. Their advantage had, however, been cut to fifteen by McLaren-Mercedes after Coulthard's win, keeping them within a race's worth of points to the early leaders. Behind, Sauber-Petronas had moved into third ahead of Jordan-Honda, as BAR-Honda and Benetton-Renault claimed their first points of the campaign.