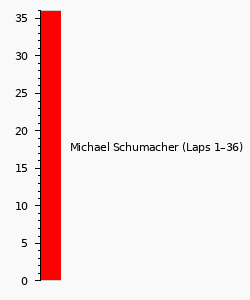 The LIX Foster's Belgian Grand Prix, otherwise known as the 2001 Belgian Grand Prix, was the fourteenth round of the 2001 FIA Formula One World Championship, staged at the Circuit de Spa-Francorchamps in Spa, Belgium, on the 2 September 2001.[1] The race would see Michael Schumacher sweep to a record 52nd career victory, albeit in a race that was overshadowed by a scary accident for Luciano Burti on the entry to Blanchimont.[1]

Qualifying had seen the two Williams-BMWs battle for pole position, before Juan Pablo Montoya delivered a stunning lap to beat teammate Ralf Schumacher by 0.887s in drying track conditions.[1] Michael Schumacher was next, but some 2.6 seconds slower than the Colombian racer, while Heinz-Harald Frentzen put his Prost-Acer into a season best fourth place.[1]

It ultimately proved to be a confusing start to the race, with the first start abandoned after Frentzen and Tarso Marques both stalled on the grid.[1] Then, as the field prepared for a second formation lap pole sitter Montoya stalled and hence had to start from the back of the grid, effectively ending his latest bid for a maiden victory before it had even begun.[1]

Once the race did get underway it was Ralf Schumacher who led into La Source, chased by his brother Michael and the second Ferrari of Rubens Barrichello.[1] Behind, Giancarlo Fisichella sliced his way up to fourth, while Jenson Button leapt into the top ten in the sister Benetton-Renault.[1]

The rest of the opening lap saw Michael Schumacher charge past Ralf on the run through Les Combes, before sprinting away to build two second lead.[1] That left the #5 Williams to fend off the attentions of Barrichello, while Fisichella tried to stay with the lead trio and keep away from the McLaren-Mercedes.[1]

The early laps saw Michael Schumacher continue to ease away by two seconds a lap, while Ralf Schumacher managed to keep Brrichello at arm's length.[1] Behind, Fisichella lost out to both McLarens in a single lap, before Burti's accident caused the entire race to be stopped on lap six.[1]

The Brazilian had been battling with Eddie Irvine at the lower-end of the field, and duly got his nose on the inside of the Jaguar-Ford Cosworth in the left-hander preceding Blanchimont.[1] Yet, rather than yield, Irvine cut across the nose Burti's car and took the front wing off the Prost, resulting in Burti sailing straight into the barriers at 150 mph.[1] The Prost duly buried itself into the tyre barrier, with the force of impact enough to break Burti's helmet.[1]

The Safety Car was deployed before the race was stopped entirely, with Irvine sprinting from his ruined car to help the marshals extract Burti, who was buried under the tyres.[1] Miraculously, however, the Brazilian had not only survived the impact but escaped without life threatening injuries, although he was still flown to Liège with concussion.[1]

Under the sporting regulations the race would be restarted as if the first four racing laps had not happened, meaning there would be a full restart.[1] However, Ralf Schumacher, who was in de facto pole, would be forced to start from the back of the grid, after Williams continued to work on his car after the two minute warning.[1]

With both Williams at the back of the field it was left to Michael Schumacher to claim the lead, the scarlet Ferrari diving into La Source unopposed.[1] Behind, Fisichella made another barnstorming start to climb from sixth to second, with teammate Button sprinting into fourth behind Barrichello.[1]

Schumacher would once again open out a huge lead in the early stages of the restarted race, pulling two seconds a lap clear of Fisichella, who soon had Barrichello and the two McLarens on his tail.[1] The Italian racer would briefly lead, however, when Schumacher made his stop, and would retain second with a quick stop once the first pit-phase was over.[1]

Fisichella's race was further enhanced by misfortune for Barrichello, who broke his front wing on a bollard at the Bus Stop chicane, and hence had to complete a full lap.[1] That, however, was countered by the fact that Coulthard was hence released into striking position behind the Benetton, and duly charged past the #7 car on the run out of Eau Rouge.[1]

With the race was over, despite Coulthard taking a second a lap out of Schumacher once clear of Fisichella.[1] The German ace hence claimed his record win ahead of the Scot, with Fisichella completing the podium ahead of Mika Häkkinen, a recovering Barrichello and Jean Alesi.[1]

Given his dominance across most of the campaign there was little surprise that Michael Schumacher had wrapped up the title in Hungary, claiming the crown with four races to spare. Closest challenger David Coulthard would therefore face a fight to hold second for the rest of the season, with Rubens Barrichello and Ralf Schumacher both closing to within seven points of the Scot with 40 left to fight for. Behind, Mika Häkkinen was a distant fifth ahead of Juan Pablo Montoya, with eighteen drivers on the scoresheet.

Likewise, Ferrari had wrapped up the Constructors Championship for the eleventh time after their one-two in Hungary, moving onto 140 points for the campaign. That left them an unassailable 68 ahead of McLaren-Mercedes in second with four rounds to go, with the Anglo-German squad instead set to battle for the runner-up spot during the remaining races. Williams-BMW were, however, their only threat, and would leave Hungary thirteen behind their compatriots.

The full entry list for the 2001 Belgian Grand Prix is outlined below:

The full qualifying results for the 2001 Belgian Grand Prix are outlined below:

The full results for the 2001 Belgian Grand Prix are outlined below:

Michael Schumacher broke through the 100 point barrier with his eighth win of the campaign in Belgium, the already crowned Champion leaving Spa with 104 points. David Coulthard, meanwhile, had managed to gain a firmer grip on second, moving nine clear of Rubens Barrichello in third, and thirteen clear of fourth placed Ralf Schumacher. Mika Häkkinen, meanwhile, was set for a lonely fifth place in the Championship, with Juan Pablo Montoya in sixth.

In the Constructors Championship Ferrari had moved onto 152 points for the season, having extended their already unassailable lead. McLaren-Mercedes were still in second, leaving Belgium on 81 points, with a 22 point advantage over Williams-BMW with three races to go. Those two were now in a private duel for the runner-up spot, with Sauber-Petronas unable to catch the former squad in fourth.