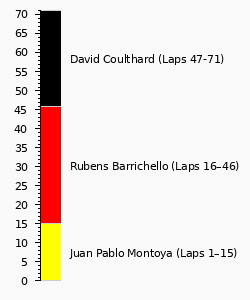 Qualifying had seen Schumacher sweep to pole position for the fifth time in 2001, beating an increasingly impressive Juan Pablo Montoya by a tenth of a second.[2] Ralf Schumacher was next ahead of Barrichello, while the two McLaren-Mercedes of Coulthard and Mika Häkkinen found themselves down in seventh and eighth respectively.[2]

A chaotic start to the race saw both of the Jordan-Hondas, Häkkinen and Nick Heidfeld stall on the grid, causing most of the field to take avoiding action, yet miraculously without making contact.[2] At the head of the field, meanwhile, Michael Schumacher would crawl away after his own launch control issues, handing the lead to Montoya, with Ralf Schumacher following his Colombian teammate through.[2]

The Safety Car was subsequently deployed to cover the retrieval of the stranded quartet, which saw Jarno Trulli and Heidfeld start from the pitlane, while Häkkinen and Heinz-Harald Frentzen retired.[2] Two laps later and the race resumed, with Montoya acing the restart to claim an early lead from the two Schumacher brothers.[2]

Jos Verstappen would cause a stir in the early laps after the restart, barging his way past Coulthard to claim fifth, before almost grabbing fourth when Barrichello failed to make a move stick on Michael Schumacher.[2] Ralf Schumacher, meanwhile, would have trouble of his own a quickly drop back from Montoya, allowing his elder brother to harass him for second.[2]

Once clear of his brother, who soon stopped in the pits to retire, Michael Schumacher swept onto the back of Montoya, only to find that the Colombian racer was a very stubborn defender.[2] Indeed, Schumacher ultimately decided to make an ambitious lunge at the Remus Kurve, only for the pair to slide wide and allow Barrichello, Verstappen and Coulthard through.[2]

Barrichello led the race for a few laps before making his stop with Verstappen, leaving Coulthard in the lead on a asymmetrical two-stop.[2] The Scot duly nursed his tyres and fuel beautifully over the following laps to gain a net lead, emerging from his second stop a second clear of Barrichello.[2]

The closing stages saw Coulthard just keep the Brazilian at bay, as both were steadily caught by Schumacher.[2] With time running out Ferrari team principle Jean Todt ordered Barrichello to move aside, only for the Brazilian racer to ignore the command, with the #2 Ferrari remaining stubbornly in-front of the sister car through to the final lap.[2]

Indeed, it was only on the run to the finish line that Barrichello finally relented, stamping on the brakes a few yards from the chequered flag to allow Schumacher to charge through to claim second.[2] That, however, was only enough to give the German ace second, for Coulthard had already swept across the line to claim victory by over two seconds.[2]

Victory had put Michael Schumacher back in command of the 2001 FIA Formula One World Championship, leaving Spain with an eight point advantage. David Coulthard remained his closest challenger on 28 points, double the tally of third placed Rubens Barrichello suggesting that the Scot would be the German ace's closest challenger with almost a third of the season completed. Behind, there was no change to the rest of the top five, Ralf Schumacher and Nick Heidfeld holding station, while Juan Pablo Montoya and Jacques Villeneuve had registered their first points of the campaign.

In the Constructors Championship Ferrari had restored their one race advantage over the rest of the field, moving onto a half century in Barcelona with 50 points. McLaren-Mercedes were still their largest threat, leaving Spain eighteen behind, with a fourteen point advantage of their own over third placed Williams-BMW. Jordan-Honda, Sauber-Petronas, BAR-Honda and Benetton-Renault, meanwhile, had held station as the only other scorers.

The full entry list for the 2001 Austrian Grand Prix is outlined below:

The full qualifying results for the 2001 Austrian Grand Prix are outlined below:

Winner David Coulthard declined the traditional champagne spraying as a mark tribute to Paul Morgan, who died on in a plane crash at Sywell, Northamptonshire 12 May.

The full results for the 2001 Austrian Grand Prix are outlined below:

David Coulthard would leave Austria as a serious title contender after his second win of the campaign, moving onto 38 points after the opening third of the season. That left him just four behind Michael Schumacher after the late Ferrari swap, suggesting that the controversial switch was the correct call by the Scuderia. It did, however, mean that Rubens Barrichello fell twenty points behind the Scot in third, with Ralf Schumacher and Nick Heidfeld also losing ground.

In the Constructors Championship it had been an even day for Ferrari and McLaren-Mercedes at the head of the field, both having claimed ten points across the weekend. That meant that the former's lead remained a healthy eighteen points after six races, with a fair gap back to third placed Williams-BMW. Jordan-Honda were next, a point ahead of Sauber-Petronas, while Arrows-Asiatech had become the eighth constructor to claim a place on the score board.