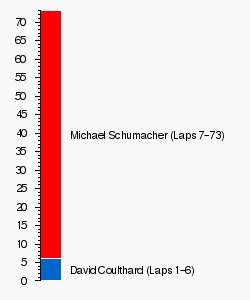 The 2000 United States Grand Prix, otherwise officially known as the 29th SAP United States Grand Prix, was the fifteenth round of the 2000 FIA Formula One World Championship, staged at the Indianapolis Motor Speedway in Speedway, Indianapolis, Indiana, on the 24 September 2000.[1] The race would see Michael Schumacher sweep to victory and the Championship lead, after his main title rival Mika Häkkinen suffered an engine failure mid-race.[1]

Qualifying had seen Schumacher secure pole position, edging out Häkkinen's teammate David Coulthard by a tenth of a second.[1] Häkkinen himself would line up in third ahead of Schumacher's teammate Rubens Barrichello, while Jarno Trulli was best of the rest for Jordan-Mugen-Honda.[1]

The start saw Coulthard claim the lead in damp conditions, although it quickly became clear that he had, in fact, jumped the lights to do so.[1] Regardless, it was the Scot who led the charge onto the in-field ahead of Schumacher, while Häkkinen fended off the attentions of Barrichello to keep the German ace in his sights ahead.[1]

Coulthard did his best to escape during the early stages of the race, knowing he would be slapped with a ten-second stop-go penalty at some point.[1] Behind, Häkkinen and Barrichello joined the chase, while Trulli and Jenson Button collided while fighting for fifth, promoting 1995 Indy 500 winner Jacques Villeneuve into the position as they headed for the pits for repairs.[1]

The Grand Prix cars quickly began to dry the circuit, prompting Barrichello to become the first of the front runners to pit for slicks on lap six.[1] Häkkinen followed him in a lap later with the majority of the field, while Coulthard came in on lap nine to hand the lead to Schumacher.[1]

Coulthard was slapped with his penalty on lap eight, serving it a lap after his stop, while Schumacher managed to match Häkkinen's pace through to lap sixteen, despite remaining on intermediate tyres.[1] When the German did finally make his stop he would emerge with a ten second lead, although Häkkinen quickly began to demolish his advantage.[1]

Within ten laps the gap between them had been cut to just four seconds, although Schumacher would never have to defend his position.[1] Instead, Häkkinen would see his Mercedes engine expire in his mirrors as he chased the German ace, knowing he was about to lose his two point lead in the Championship as a result.[1]

Schumacher was hence left with a very secure lead, managing to make his second stop without dropping behind then second placed Heinz-Harald Frentzen.[1] The Jordan-Mugen-Honda itself was in a strategic fight with Barrichello for second, a fight that would ultimately be won by the Brazilian's pit crew.[1]

Frentzen hence found himself in a fight for third with Villeneuve to the flag as, out front, Schumacher survived a late spin to claim victory, and an eight point lead in the Championship.[1] Barrichello claimed second ahead of Frentzen and Villeneuve, while Coulthard recovered to fifth in front of Pedro Diniz.[1]

Michael Schumacher's sixth win of the campaign moved the German ace to within two points of the Championship lead with three rounds to go, leaving Italy with 78 points. Mika Häkkinen hence continued to lead the charge, with those two set to duel for the crown for the rest of the season. Indeed, while David Coulthard remained mathematically in the hunt, the Scot left Italy nineteen behind his title leading teammate, and hence would have to win all three remaining races just to entertain a challenge.

In the Constructors Championship McLaren-Mercedes had seen their lead cut in half atop the points table, although they had still ended the afternoon with a four point advantage. Indeed, Ferrari had done the damage, moving onto 127 points for the campaign, with the two teams having seven wins apiece heading into the final stage of the season. Behind, Williams-BMW continued to inch away from their pursuers in third, while Benetton-Playlife likewise enhanced their grip on fourth.

The full entry list for the 2000 United States Grand Prix is outlined below:

The full qualifying results for the 2000 United States Grand Prix are outlined below:

The full results for the 2000 United States Grand Prix are outlined below:

A seventh victory of the campaign for Michael Schumacher lifted him back to the top of the Championship, leaving the US with 88 points to his name. Furthermore, with Mika Häkkinen failing to score, the German ace would head to Japan with an eight point lead, meaning he could win the title with a race to spare. Indeed, Häkkinen would have to win the race just to keep himself in the hunt if Schumacher scored, while Schumacher would win the Championship if he finished ahead of the Finn and in the points.

In the Constructors Championship, meanwhile, Ferrari had retaken the lead with two rounds to go, leaving Indianapolis with 143 points. That meant that the Scuderia held a ten point advantage over McLaren-Mercedes, and would therefore win the title at the penultimate round if they outscored the Anglo-German squad by six points in Japan. In contrast, McLaren would likely have to win in Japan to keep their hopes alive, with a double non-finish for the Scuderia likely required for them to challenge in Malaysia.