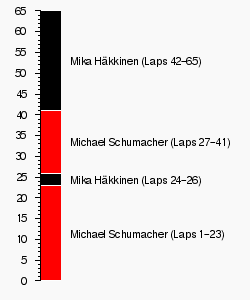 The XLII Gran Premio Marlboro de España, otherwise known as the 2000 Spanish Grand Prix, was the fifth round of the 2000 FIA Formula One World Championship, staged at the Circuit de Catalunya near Barcelona, Spain, on the 7 May 2000.[1] The race would see Mika Häkkinen and David Coulthard claim a one-two for McLaren-Mercedes, as a mistake in the pits cost Michael Schumacher valuable time.[1]

Qualifying had seen Championship leader Schumacher emerge as the man to beat, securing pole position ahead of Häkkinen as they duelled for top spot.[1] Their teammates Rubens Barrichello and Coulthard hence shared the second row, with Ralf Schumacher best of the rest for Williams-BMW.[1]

The start saw Schumacher and Häkkinen continue their qualifying battle, jostling for the lead into the first corner.[1] Schumacher ultimately emerged ahead having blocked any potential dive by the Finn, while his brother Ralf shot into third between Barrichello and Coulthard.[1]

Indeed, Ralf Schumacher's start was so strong that he inadvertently helped his brother, with a slide into the back of Häkkinen causing the McLaren to briefly slide sideways.[1] Häkkinen hence had to recover and lost momentum, allowing Michael Schumacher to establish a small lead at the head of the field.[1]

Schumacher would continue to establish his lead during the opening stages of the race, while Häkkinen eased clear of Ralf Schumacher.[1] The Williams-BMW hence found himself under assault from Barrichello and Coulthard, while Jacques Villeneuve drifted away in sixth, holding up Heinz-Harald Frentzen.[1]

The pit window opened on lap eighteen, beginning with Jenson Button making his first stop, with Villeneuve following him in.[1] The Canadian would not last too long after his stop however, the BAR-Honda setting fire to itself, although that was not enough to trigger a Safety Car.[1]

The leaders then began making their stops, beginning with Ralf Schumacher on lap 22, before Michael pulled in from the lead a lap later.[1] Unfortunately Schumacher misjudged his pit-entry and hit refueller Nigel Stepney, dragging the Brit a few metres along the pit-apron.[1] Schumacher lost a few seconds as Stepney was untangled and replaced, with the Brit taken to the medical centre with damaged ankle ligaments.[1]

That lost time ensured that, come the end of the pitstop phase, Schumacher had lost almost all of his lead, although he crucially remained ahead of Häkkinen.[1] Behind the order remained Ralf Schumacher, Barrichello and Coulthard, with the Scot triggering the second round of stops on lap 41.[1]

This time Coulthard used the undercut to jump into third, while a slow stop for Schumacher gifted the lead to Häkkinen.[1] The #3 Ferrari was hence left vulnerable to Coulthard, with Schumacher putting up a typically aggressive defence to keep the Scot at bay.[1]

Ultimately, however, there would be no stopping Coulthard, who duly slitered around the outside of the German at turn one, before storming away after Häkkinen.[1] Schumacher was subsequently caught by his brother Ralf, although their fraternal squabble would ultimately result in Barrichello passing the pair of them.[1]

With that the race was over, with Häkkinen able to cruise through the final laps to claim his first win of the campaign.[1] Coulthard duly claimed second ahead of a lonely Barrichello, while Ralf bested brother Michael in their fight to secure fourth.[1] Button, meanwhile, was set to claim sixth, only for his BMW engine to fail late on, handing the final point to Frentzen.[1]

The full entry list for the 2000 Spanish Grand Prix is outlined below:

The full qualifying results for the 2000 Spanish Grand Prix are outlined below:

The full results for the 2000 Spanish Grand Prix are outlined below: