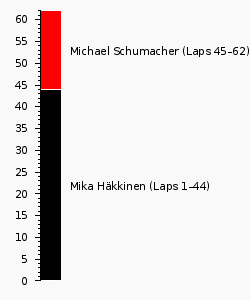 The 2000 San Marino Grand Prix, otherwise officially known as the 20° Gran Premio Warsteiner di San Marino, was the third round of the 2000 FIA Formula One World Championship, staged at the Autodromo Enzo e Dino Ferrari near Imola, Italy, on the 9 April 2000.[1] The race would see Michael Schumacher snatch victory from under the nose of Mika Häkkinen, in a race that was decided by strategy as well as on-track battles.[1]

From the start of the weekend it became clear that it would be a Häkkinen/Schumacher fight for victory, with the pair duelling for pole position during qualifying.[1] Ultimately it was the Finn who won that battle, with just 0.091s separating the duo at the end of the session.[1]

The start of the race saw Häkkinen make a perfect getaway, leaving Schumacher to fend off the attentions of David Coulthard into Tamburello.[1] In typical Schumacher fashion the German ace squeezed Coulthard to the point that the Scot had to lift off, and hence opened the door for Rubens Barrichello to claim third.[1]

That left Häkkinen with a small lead over Schumacher, with those two quickly easing clear of Barrichello and Coulthard.[1] Indeed, the top two were almost a second quicker than their teammates during the early stages, while the Brazilian and the Scot were able to ease clear of fifth placed Jacques Villeneuve at an impressive rate too.[1]

With the top four sorted out for the time being attention duly focused on Villeneuve, who had a train of cars stuck behind his BAR-Honda.[1] In the midst of that train sat Eddie Irvine in the Jaguar-Ford Cosworth, running in an impressive seventh, only for the Ulsterman to throw away two places by accidentally hitting his pit-limiter.[1]

Back with the leaders and the gap between Häkkinen and Schumacher stood at three seconds on lap 26, the point at which Coulthard, some 25 seconds off the lead, dived into the pits to open the pit-window.[1] Häkkinen came in a lap later and received a stunning 3.2 second service, meaning he was definitely on a two-stop strategy, while Schumacher took on more fuel for a one-stop.[1]

Häkkinen was hence left with an enhanced five second lead, while Barrichello slipped back behind Coulthard, having been undercut by the Scot.[1] Elsewhere, Villeneuve found himself fighting with Ralf Schumacher and Mika Salo, while Irvine and Jarno Trulli fought behind them.[1]

Shortly before Häkkinen's second stop the Finn's lead would be wiped out, with Häkkinen hitting a stray piece of debris that damaged the McLaren-Mercedes' floor.[1] An electrical glitch then cost him more time, before he swept into the pits on lap 44 to hand Schumacher the lead.[1]

With Coulthard and Barrichello also stopping Häkkinen emerged in second place, and did his best to hunt down Schumacher, who came in a few laps later for a quick top-up and fresh tyres.[1] The German racer's shorter stop, courtesy of his longer stop earlier on, ensured that he emerged ahead of Häkkinen, and hence settled the race there and then.[1]

Schumacher hence was left to cruise across the line to claim victory, a second clear of Häkkinen having kept out of reach of the Finn.[1] Coulthard claimed a distant third ahead of Barrichello, while Villeneuve defeated Salo in their duel, Ralf Schumacher having hit trouble mid-race in his Williams-BMW.[1]

Michael Schumacher moved twelve points clear at the head of the Championship having made it two wins in two races, holding a perfect score of twenty points. Giancarlo Fisichella was a surprise second after the opening rounds, and hence the German's closest challenger, while Rubens Barrichello had slipped to third. The Brazilian was level on points with Schumacher's brother Ralf, while Heinz-Harald Frentzen completed the top five.

In the Constructors Championship Ferrari had extended their early lead, leaving Brazil on 26 points. Benetton-Playlife were into second, already eighteen off the leaders, while Jordan-Mugen-Honda were in third, one behind. Williams-BMW were mathematically level with the Irish squad in fourth, while BAR-Honda were the only other scorers in fifth.

The full entry list for the 2000 San Marino Grand Prix is outlined below:

The full qualifying results for the 2000 San Marino Grand Prix are outlined below:

The full results for the 2000 San Marino Grand Prix are outlined below:

Retrieved from "https://f1.fandom.com/wiki/2000_San_Marino_Grand_Prix?oldid=85122"
Community content is available under CC-BY-SA unless otherwise noted.