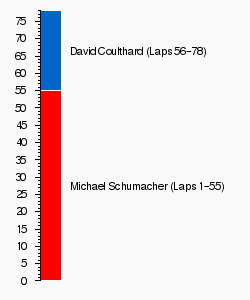 The 2000 Monaco Grand Prix, otherwise known as the LVIII Grand Prix Automobile de Monaco, was the seventh round of the 2000 FIA Formula One World Championship staged at the Circuit de Monaco in Monte Carlo, Monaco, on the 4 June 2000.[1] The race would see David Coulthard claim victory, as a cracked exhaust melted race leader Michael Schumacher's hopes mid-race.[1]

Indeed, Schumacher had started the weekend superbly, claiming a strong pole position ahead of a surprisingly competitive Jarno Trulli of Jordan-Mugen-Honda.[1] Coulthard, meanwhile, would share the second row with Trulli's teammate Heinz-Harald Frentzen, while Mika Häkkinen and Rubens Barrichello shared the third row.[1]

The start of the race proved chaotic, with the first attempt to start having to be aborted after an engine failure for Alexander Wurz.[1] A second formation lap followed before the field tried again, only for a software glitch as the starting lights went out to cause the system to think that the race had been red flagged.[1]

Marshals further around the circuit were told that the race was stopped, while others believed that the track was clear.[1] This ultimately caused Pedro de la Rosa and Jenson Button to collide at the hairpin, the Brit having slowed having seen the red flag being prepared.[1]

Their collision left the circuit blocked, and hence required a real red flag period to allow the circuit to be cleared.[1] Five drivers including Button would jump in their spare cars for the third attempt at the start, with the situation getting embarassing for the FIA and organisers.[1]

This time the start proceedure work flawlessly, with Schumacher easing ahead of Trulli to claim the lead.[1] Likewise, it was grid order between Coulthard, Frentzen and Häkkinen, while Ralf Schumacher made a strong start to squeeze through to sixth from ninth on the grid.[1]

Michael Schumacher instantly began to establish a lead, pulling out a second a lap on Trulli who simply could not match the Ferrari's race pace.[1] His teammate Frentzen was in a similar position, with the German racer having to defend heavily from Häkkinen as the Finn tried to get on terms with his title rival out front.[1]

A series of collisions with the barriers would thin the field further down the order, as the order at the head of the field remained stubbornly unchanged.[1] Indeed, it was only when Häkkinen stopped in his pitbox with a brake issue that the order was significantly altered, a loose data transmitter having got trapped under the Finn's brake pedal.[1]

Trulli was the next casualty, a gearbox issue ending his hopes, before Ralf Schumacher smashed into the wall at Sainte Devote.[1] His brother Michael, meanwhile, held a half minute lead over the now second placed Coulthard, while Barrichello was now stuck behind third placed Frentzen.[1]

The mid-race stops would pass without issue, although Ferrari had noticed something worrying on the back of Schumacher's car.[1] Their mechanics had noted a hair-line fracture in the exhaust system as the German was getting refuelled, and hence sent a message to the German ace to take care of the car.[1]

With that the race was run, with Coulthard cruising across the line to claim victory, becoming the first British driver to win the Monaco Grand Prix since Jackie Stewart in 1973.[1] Barrichello was next ahead of Giancarlo Fisichella, Frentzen having retired late one, while Eddie Irvine, Mika Salo and Häkkinen claimed the remaining points.[1]

Victory for Michael Schumacher at the 2000 European Grand Prix had left the German ace with 46 points to his name in 2000, having claimed the win in four of the opening six rounds. Mika Häkkinen had hence lost ground in second, slipping eighteen behind, while David Coulthard retained third on 24. Rubens Barrichello and Ralf Schumacher completed the top five, while Pedro de la Rosa had become the thirteenth scorer of the season.

In the Constructors Championship Ferrari had marginally increased their lead, moving onto 62 points for the campaign. That left them ten ahead of McLaren-Mercedes in second, with a huge 37 point gap between themselves and compatriots Williams-BMW in third. Elsewhere, Benetton-Playlife had moved back ahead of Jordan-Mugen-Honda, while Arrows-Supertec were on the board in eighth.

The full entry list for the 2000 Monaco Grand Prix is outlined below:

The full qualifying results for the 2000 Monaco Grand Prix are outlined below:

The full results for the 2000 Monaco Grand Prix are outlined below: