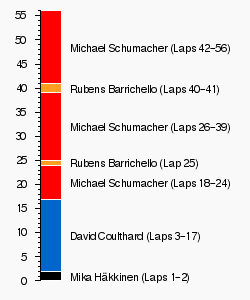 The 2000 Malaysian Grand Prix, otherwise officially known as the II Petronas Malaysian Grand Prix, was the seventeenth and final race of the 2000 FIA Formula One World Championship, held on the 22 October 2000 at the Sepang International Circuit near Kuala Lumpur, Malaysia.[1] The race would see Michael Schumacher sweep to victory for Ferrari, and hence secured the Constructors Championship for the Scuderia.[1]

Ferrari had arrived in Malaysia with the advantage in the Constructors Championship, holding a thirteen point lead over McLaren-Mercedes.[1] They would therefore win the Championship if drivers Schumacher, who had won the Drivers Championship last time out in Japan, and Rubens Barrichello could score three points or more between them.[1]

Qualifying saw Schumacher underline Ferrari's status as favourites, sweeping to pole position half a second ahead of Mika Häkkinen of McLaren.[1] David Coulthard would put the #2 McLaren into third ahead of Barrichello, while Alexander Wurz was best of the rest, albeit 1.2s off of the ultimate pace.[1]

The start of the race would see a McLaren jump the lights for the second time in three races, with Häkkinen screaming into an instant lead.[1] Schumacher tried to go with him but found the sister McLaren of Coulthard charging inside him into turn one, while Barrichello held the rest of the field back in fourth.[1]

Behind, however, there would be chaos, as Pedro de la Rosa, Nick Heidfeld and Pedro Diniz collided, before collecting Jean Alesi on their way to the gravel.[1] Further incidents saw Ralf Schumacher shoved onto the grass by Eddie Irvine, who had received a whack from Jarno Trulli, while Jos Verstappen spun out midway through the opening tour.[1] All of that would prompt the Safety Car to make an appearance at the end of the lap.[1]

The safety car stayed out until the end of lap two, with Häkkinen, knowing he would inevitably be slapped with a penalty for jumping the start, instantly gifting the lead to Coulthard.[1] Häkkinen then tried his best to keep the two marauding Ferraris at bay, in hopes of allowing Coulthard to escape up the road, although a forceful move from Schumacher saw both the scarlet cars slip ahead of the Finn.[1]

Three laps later and Häkkinen's race was effectively over, the Finn serving his ten second stop-go penalty to plummet down to eighteenth.[1] Coulthard, meanwhile, would slowly edge away from Schumacher and Barrichello, only to run wide a turn ten and pick up debris in his left hand radiator.[1]

That debris forced Coulthard to make an earlier stop than planned, with the Scot coming in on lap seventeen to hand the lead to Schumacher.[1] Schumacher duly made his bid for the lead with a series of fastest laps, before sweeping in for his stop on lap 24.[1] The German would, unsurprisingly, emerge ahead of the Scot when he rejoined.[1]

With that the fight for the lead was over, with Schumacher easing clear from Coulthard, while the Scot had enough in hand to keep Barrichello at bay.[1] Häkkinen, meanwhile, was slowly battling his way back up the order, moving into fourth with a lunge at Jacques Villeneuve on lap 28.[1]

The closing stages saw Johnny Herbert suffer a suspension failure, with the Jaguar-Ford Cosworth subsequently skating into the tyre barriers.[1] Herbert, buried under the tyres would require outside assistance to get out of the car, although he escaped without serious injury.[1]

On track, meanwhile, Coulthard would catch Schumacher late-on, but ultimately ran out of time to attack the German ace.[1] Schumacher hence flashed across the line to claim victory and the Constructors Championship for Ferrari, while Coulthard and McLaren had to settle for second.[1] Behind, Barrichello was a lonely third ahead of Häkkinen, while Villeneuve and Irvine claimed the final points of the campaign.[1]

Victory in Japan left Michael Schumacher with an unassailable lead in the Championship ahead of the season finale, holding 98 points after the sixteenth race of the season. Mika Häkkinen, meanwhile, left Suzuka twelve off his arch-rival, meaning he had to settle for second. The fight for third behind them was also effectively over, with David Coulthard nine ahead of Rubens Barrichello in the battle of the "number twos".

In the Constructors Championship the title fight would continue on to the finale, although Ferrari were the overwhelming favourites. Indeed, the Scuderia would arrive in Malaysia with a thirteen point advantage over McLaren-Mercedes, meaning they only had to score three points to claim the crown. Conversely, the Anglo-German squad would have to claim a double-podium just to level with their Italian rivals, with a one-two the only feasible result.

The full entry list for the 2000 Malaysian Grand Prix is outlined below:

The full qualifying results for the 2000 Malaysian Grand Prix are outlined below:

The full results for the 2000 Malaysian Grand Prix are outlined below:

The 2000 FIA Formula One World Championship came to an end in much the same way that it had started, with Michael Schumacher claiming victory. The German ace hence ended the season with 108 points to his name, nineteen clear of Mika Häkkinen in second place. David Coulthard completed the end-of-season podium with 73 points, while Rubens Barrichello and Ralf Schumacher completed the top five.

The Constructors Championship, meanwhile, would be won by Ferrari for the second successive season in 2000, with the Scuderia ending the season on 170 points. McLaren-Mercedes, meanwhile, would end the campaign on 152 points, eighteen behind, before a huge 116 point gap back to Williams-BMW in third. Behind them, Benetton-Playlife finished fourth ahead of BAR-Honda, with the Italian squad considered to be ahead on countback as both finished on twenty points.