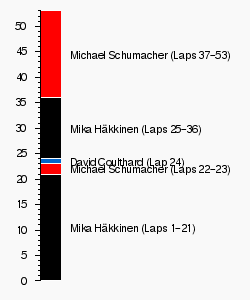 The 2000 Japanese Grand Prix, formally the XXVI Fuji Television Japanese Grand Prix (XXVI フジテレビ日本グランプリ in Japanese) was the sixteenth and penultimate round of the 2000 FIA Formula One World Championship, staged at the Suzuka Circuit in Mie Prefecture, Japan, on the 8 October 2000.[1] The race would see Michael Schumacher defeat arch-rival Mika Häkkinen in a duel for victory, a win that would also earn Schumacher his third World Championship crown.[1]

Qualifying had seen the two title protagonists joust for pole position, with Schumacher ultimately emerging ahead by just 0.009s.[1] A four tenth gap then followed before their respective teammates David Coulthard and Rubens Barrichello appeared on the second row, while the two Williams-BMWs shared the third row.[1]

The start saw Häkkinen, who had to finish ahead of Schumacher to keep his title hopes alive, make a strong start, sweeping across the nose of Schumacher to claim the lead.[1] Schumacher was hence forced to settle for second, while Ralf Schumacher charged past teammate Jenson Button and Barrichello to claim fourth behind Coulthard.[1]

Unsurprisingly Häkkinen and Michael Schumacher would be the class of the field during the early stages, sprinting away from Coulthard and co. as they set about deciding the World Championship.[1] Indeed, Häkkinen was particularly impressive in the opening stages, dancing his McLaren-Mercedes around Suzuka in his bid to try and escape from Schumacher as well.[1]

By lap twenty both Häkkinen and Schumacher, split by three seconds, had enough time in hand to pit and rejoin ahead of Ralf Schumacher in fourth, with the younger Schumacher coming in himself at that point.[1] Häkkinen duly stayed out until lap 22, handing the lead to the elder Schumacher, before the #3 Ferrari peeled off to hand the lead to Coulthard.[1]

Coulthard's stop a lap later restored Häkkinen to the lead ahead of Schumacher, while the Scot himself returned to a lonely third.[1] It was at this point, however, that the race began to move to Schumacher's favour, with the German ace slowly creeping onto the back of Häkkinen.[1]

Indeed, when Schumacher too a glancing blow from Ricardo Zonta without sustaining damage there was a certain air of inevitability that it was now his race to lose.[1] Häkkinen would, however continue to lead through to his second stop, coming in on lap 37 to rejoin ahead of Coulthard in second.[1]

With Häkkinen out of the way Schumacher made his bid for victory, upping his pace with a string of quick laps.[1] Ultimately Schumacher's two lap burst in clear air proved decisive, with the German ace emerging from the pits four seconds clear of Häkkinen with thirteen laps to go.[1]

Häkkinen threw everything he had at Schumacher in the closing stages, but ultimately ran out of time to catch his rival.[1] Schumacher hence flashed across the line to claim victory and the World Championship with a race to spare, while Häkkinen had to console himself with second ahead of Coulthard.[1]

Schumacher became the first driver to win the Championship for Ferrari since Jody Scheckter in 1979, ending a 21 year barren run for the Scuderia.[1] Häkkinen, meanwhile, would officially be declared as runner-up for the campaign, although the Constructors Championship would have to be settled at the finale in Malaysia.[1]

A seventh victory of the campaign for Michael Schumacher lifted him back to the top of the Championship, leaving the US with 88 points to his name. Furthermore, with Mika Häkkinen failing to score, the German ace would head to Japan with an eight point lead, meaning he could win the title with a race to spare. Indeed, Häkkinen would have to win the race just to keep himself in the hunt if Schumacher scored, while Schumacher would win the Championship if he finished ahead of the Finn and in the points.

In the Constructors Championship, meanwhile, Ferrari had retaken the lead with two rounds to go, leaving Indianapolis with 143 points. That meant that the Scuderia held a ten point advantage over McLaren-Mercedes, and would therefore win the title at the penultimate round if they outscored the Anglo-German squad by six points in Japan. In contrast, McLaren would likely have to win in Japan to keep their hopes alive, with a double non-finish for the Scuderia likely required for them to challenge in Malaysia.

The full entry list for the 2000 Japanese Grand Prix is outlined below:

The full qualifying results for the 2000 Japanese Grand Prix are outlined below:

The full results for the 2000 Japanese Grand Prix are outlined below:

Victory in Japan left Michael Schumacher with an unassailable lead in the Championship ahead of the season finale, holding 98 points after the sixteenth race of the season. Mika Häkkinen, meanwhile, left Suzuka twelve off his arch-rival, meaning he had to settle for second. The fight for third behind them was also effectively over, with David Coulthard nine ahead of Rubens Barrichello in the battle of the "number twos".

In the Constructors Championship the title fight would continue on to the finale, although Ferrari were the overwhelming favourites. Indeed, the Scuderia would arrive in Malaysia with a thirteen point advantage over McLaren-Mercedes, meaning they only had to score three points to claim the crown. Conversely, the Anglo-German squad would have to claim a double-podium just to level with their Italian rivals, with a one-two the only feasible result.