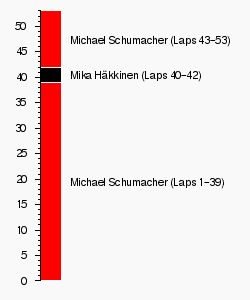 The 2000 Italian Grand Prix, formally theLXXI Gran Premio Campari d'Italia, was the fourteenth race of the 2000 FIA Formula One World Championship, staged at the Autodromo Nazionale Monza in Monza, Italy, on the 10 September 2000.[1] The race would see Michael Schumacher sweep to a popular and emotional victory for Ferrari, matching the win tally of three time Champion Ayrton Senna.[1]

The start would, unfortunately, see a huge accident claim the life of marshal Paolo Gislimberti, who was struck by an errant wheel.[1] The trigger would be a collision between Heinz-Harald Frentzen and Barrichello, which collected Jarno Trulli and Coulthard as they tried to avoid them.[1] The left rear wheel from ripped from Trulli's car, and would unfortunately strike Gislimberti as he emerged with a fire extinguisher at the side of the circuit.[1]

Further accidents saw Pedro de la Rosa catapult himself over the top of Johnny Herbert, while Mika Salo and Eddie Irvine clashed in the midfield.[1] The sheer amount of stray carbon fibre and damaged cars ensured that the Safety Car was called, which remained out for eleven laps.[1]

In that time Jenson Button would become the seventh retirement of the race, swiping the wall exiting Ascari having had to take avoiding action after teammate Ralf Schumacher dramatically slowed ahead of him.[1] The Brit duly went sailing into the barriers at Parabolica as the race got back underway, although his Williams-BMW was deemed to be in a safe enough position to be removed without the protection of the safety car.[1]

The restart saw Michael Schumacher sprint into the lead, Häkkinen and Villeneuve giving chase in second and third.[1] Ralf Schumacher was next ahead of Giancarlo Fisichella, while Marc Gené in the uncompetitive Minardi-Fondmetal was up in seventh as a result of the chaos at the first corner.[1]

There would be no stopping Schumacher at the head of the field, with the German ace easing away from Häkkinen by a second a lpa.[1] Villeneuve, meanwhile, would retire with a gearbox failure, allowing Jos Verstappen to move into third, having passed Ralf Schumacher after he made a mistake.[1]

Out front, meanwhile, Schumacher would briefly lose the lead to Häkkinen during the pitstop phase, before the Finn stopped to hand him back the lead.[1] Häkkinen duly began to chip away at the German ace's lead, although time would run out before the McLaren racer could entertain any thoughts of an attack.[1]

Schumacher hence crossed the line to claim victory, before breaking down in a post-race press conference having been told that his 41st win put him level with Ayrton Senna on the all-time win list.[1] Häkkinen, meanwhile, secured second to maintain his Championship lead, while Ralf Schumacher reclaimed third from Verstappen during the stops.[1]

The full entry list for the 2000 Italian Grand Prix is outlined below:

The full qualifying results for the 2000 Italian Grand Prix are outlined below:

The full results for the 2000 Italian Grand Prix are outlined below:

Michael Schumacher's sixth win of the campaign moved the German ace to within two points of the Championship lead with three rounds to go, leaving Italy with 78 points. Mika Häkkinen hence continued to lead the charge, with those two set to duel for the crown for the rest of the season. Indeed, while David Coulthard remained mathematically in the hunt, the Scot left Italy nineteen behind his title leading teammate, and hence would have to win all three remaining races just to entertain a challenge.

In the Constructors Championship McLaren-Mercedes had seen their lead cut in half atop the points table, although they had still ended the afternoon with a four point advantage. Indeed, Ferrari had done the damage, moving onto 127 points for the campaign, with the two teams having seven wins apiece heading into the final stage of the season. Behind, Williams-BMW continued to inch away from their pursuers in third, while Benetton-Playlife likewise enhanced their grip on fourth.