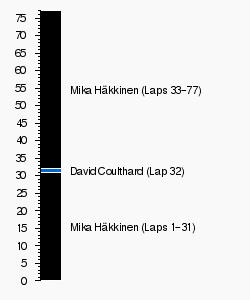 The 2000 Hungarian Grand Prix, otherwise known as the XVI Marlboro Magyar Nagydij, was the twelfth round of the 2000 FIA Formula One World Championship, staged at the Hungaroring near Budapest, Hungary, on the 13 August 2000.[1] The race would see Mika Häkkinen secure a dominant victory to claim the lead in the Championship hunt, defeating Michael Schumacher and teammate David Coulthard.[1]

Qualifying had seen Schumacher claim pole position for the fifth time in 2000, beating Coulthard by three tenths of a second.[1] Häkkinen was next ahead of Ralf Schumacher in the Williams-BMW, while Rubens Barrichello put the #4 Ferrari into fifth.[1]

The start would see Häkkinen make his bid for victory, sliding between Coulthard and Schumacher to claim the lead as they charged into the first corner.[1] Schumacher reacted too late and so had to settle for second, with his defensive manoeuvre almost allowing his brother Ralf to get ahead of the #2 McLaren-Mercedes.[1]

Come the end of the opening tour Häkkinen had established a small lead ahead of Michael Schumacher and Coulthard, while Ralf Schumacher was fighting with Barrichello for fourth.[1] Behind, the field had been thinned by a collision between Jacques Villeneuve and Pedro de la Rosa, while Giancarlo Fisichella slipped back with a spin.[1]

The race at the head of the field quickly proved to be a procession, with Häkkinen sprinting away from Schumacher, while the German ace had to keep an eye on Coulthard in third.[1] A gap then appeared before Ralf Schumacher's Williams materialised, with Barrichello glued to its tail, with the German racer ultimately becoming the first pit-caller on lap 28.[1]

Barrichello followed him in a lap later, while Häkkinen stopped on lap 31, rejoining in third behind Coulthard.[1] Schumacher and Coulthard then made their stops to hand the lead back to the Finn, with Coulthard unable to get ahead of Schumacher during their tyre swaps.[1]

Indeed, Coulthard's bid to overtake Schumacher would be hampered by back markers, for the Scot always seemed to trip over them in the most inconvenient places.[1] The worst loss of time for Coulthard would be behind the two Minardi-Fondmetals, which cost the Scot two seconds apiece, dropping him off the back of the German ace.[1]

With the fight for second effectively over the attention focused further down the field, with Jarno Trulli, Jenson Button and Pedro Diniz squabbling over seventh behind Heinz-Harald Frentzen.[1] Eddie Irvine later joined the fight in place of Diniz, although their hopes of a points finish were curtailed when they were lapped in the closing stages of the race.[1]

Indeed, Häkkinen would cruise through the remaining laps to claim his third win of the campaign, taking his points tally to 64 for the season.[1] That left the Finn two ahead of second place finisher Schumacher, while David Coulthard slipped six behind with third place.[1] The remaining points would go to Ralf Schumacher, Barrichello and Frentzen, the latter being the last man on the lead lap.[1]

The full entry list for the 2000 Hungarian Grand Prix is outlined below:

The full qualifying results for the 2000 Hungarian Grand Prix are outlined below:

The full results for the 2000 Hungarian Grand Prix are outlined below: