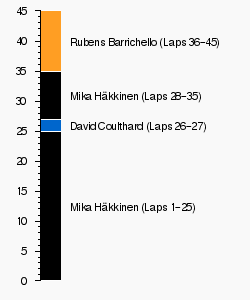 The 2000 German Grand Prix, otherwise officially known as the LXII Großer Mobil 1 Preis von Deutschland, was the eleventh round of the 2000 FIA Formula One World Championship, held at the Hockenheimring in Baden-Württemberg, Germany, on the 30 July 2000.[1] The race would see Rubens Barrichello claim a popular victory, after McLaren-Mercedes were sabotaged by one of their former "fans".[1]

It was David Coulthard who emerged from qualifying with pole position, while Michael Schumacher secured second.[1] Giancarlo Fisichella was a surprise third ahead of Mika Häkkinen, while Barrichello was a lowly eighteenth after getting caught out in mixed conditions.[1]

The start saw Häkkinen make the best start, sprinting through to claim the lead as Schumacher almost out-gunned Coulthard.[1] Unfortunately for the German ace his usual aggressive lunge to the inside of the circuit saw him get collected by Fisichella, resulting the German racer retiring at the first corner for a second successive race.[1]

That left Häkkinen at the head of the field ahead of teammate Coulthard, while Jarno Trulli moved into third.[1] Barrichello, meanwhile, had streaked through to tenth after the first corner chaos, battling with Ralf Schumacher at the end of the lap.[1]

Häkkinen duly began to ease clear of Coulthard, with the Scot also able to escape up the road from Trulli during the early stages.[1] All of the early attention hence focused on the progress of Barrichello, who picked his way up fifth by lap six.[1]

With that Barrichello began hunting down Pedro de la Rosa and Jarno Trulli, catching and passing them on laps thirteen and fifteen respectively, before diving into the pits to open the pit window.[1] He duly rejoined in fifth and began hunting de la Rosa down once again, before a "fan" made his bid to disrupt the race.[1]

The "fan", a former Mercedes-Benz employee named Robert Sehli, sprinted across the circuit to avoid the marshals at turn two, prompting the FIA to launch the Safety Car on lap 26.[1] This demolished the lead established by Häkkinen and Coulthard, who made their stops under the safety car.[1] However, while Häkkinen came in on lap 27, and was able to rejoin in the lead, Coulthard was forced to stay out a lap longer and dropped to sixth.[1]

Once Sehli was removed the race resumed on lap 29, with Trulli, now in second, defending heavily from Barrichello.[1] However, the race was barely back up to speed before Jean Alesi wiped himself out on the back of Pedro Diniz, causing the safety car to appear once again.[1]

The race restarted for a second time on lap 31, with Häkkinen breaking clear from Trulli, while the Italian was hounded by Barrichello.[1] Light rain would, however, begin to fall on the circuit, and steadily grew heavier as the laps ticked by.[1]

Jenson Button was the first driver to pit for wets, prompting an en-masse sweep into the pits for wets.[1] Yet, four drivers, namely Barrichello, Coulthard, Heinz-Harald Frentzen and Ricardo Zonta gambled on remaining on slicks, with those four moving to the front of the field.[1]

Coulthard ultimately became the last to stop, however, rejoining behind Mika Salo in fifth, while Barrichello remained out front ahead of Häkkinen.[1] The Finn duly began to chip away at the Brazilian's lead, with heavy rain approaching the circuit, but ultimately ran out of time to catch the #4 Ferrari.[1]

As such, Barrichello was able to slither across the line to claim victory, to first for a Brazilian born driver since Ayrton Senna claimed the honours at the 1993 Australian Grand Prix.[1] Häkkinen duly claimed second, seven seconds off the lead, while Coulthard salvaged third ahead of Button, Salo and de la Rosa.[1]

With Michael Schumacher being taken out at the first corner in Austria the Championship battle had become very interesting leaving Austria, with just eight points separating the top three. Indeed, Schumacher's lead over second placed David Coulthard had been cut to just six points, while victory for Mika Häkkinen had moved the Finn to within two of his teammate. That meant both were within a race win of Schumacher's 56 point tally, with momentum behind them.

In the Constructors Championship the post-race decision to dock McLaren-Mercedes the point for victory may have proved crucial in the title battle, for it kept Ferrari at the head of the hunt. Indeed, the Scuderia left Austria with a four point advantage over their Anglo-German rivals, who would otherwise have left Spielberg with a six point lead. Behind, Williams-BMW had moved back into third ahead of Benetton-Playlife, while BAR-Honda jumped ahead of Jordan-Mugen-Honda.

The full entry list for the 2000 German Grand Prix is outlined below:

The full qualifying results for the 2000 German Grand Prix are outlined below:

The full results for the 2000 German Grand Prix are outlined below: