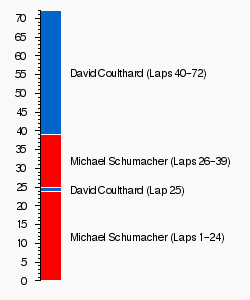 The 2000 French Grand Prix, otherwise officially advertised as the LXXXVI Mobil 1 Grand Prix de France, was the ninth round of the 2000 FIA Formula One World Championship, staged at the Circuit de Nevers Magny-Cours in Magny-Cours, France, on the 2 July 2000.[1] The race would see David Coulthard sweep to victory ahead of McLaren-Mercedes teammate Mika Häkkinen, as they battled their way past both Ferraris.[1]

Qualifying had seen Championship leader Michael Schumacher secure pole, while Coulthard lined-up alongside.[1] Rubens Barrichello then shared the second row with Häkkinen, while Ralf Schumacher was best of the rest for Williams-BMW.[1]

The start saw Schumacher make a strong start to claim the lead, with the German ace duly moving across to squeeze Coulthard into the first corner.[1] In running the Scot wide Schumacher opened the door for Barrichello to overtake the Scot, meaning it was a one-two for Ferrari ahead of the two McLarens.[1]

Behind, Jacques Villeneuve would make a strong start to claim his familiar fifth place, and duly proceeded to hold up the rest of the field as usual, allowing the top four to escape.[1] The leaders, meanwhile, would squabble among themselves during the early laps, before Barrichello began to ease off to allow Schumacher to escape up the road.[1]

Indeed, the Brazilian racer was trying every trick in the book to keep Coulthard and Häkkinen at bay, with the two McLarens hounding the back of the #4 Ferrari.[1] Coulthard would eventually force his way past on lap 22, sending Barrichello a dummy into Adelaide to break through.[1]

That move came just as the field began to make their first stops, with the lead group all stopping within three laps of one another.[1] In the midst of that swap Häkkinen managed to jump Barrichello, while Jenson Button briefly moved through to fifth.[1]

Coulthard caught onto the back of Schumacher on lap 32, although his first attempt at passing the German ace resulted in an aggressive defence and a lot of hand gestures from the Scot.[1] That prompted a more aggressive attack from Coulthard when he tried the move again on lap 40, running the German racer right to the edge of the circuit at Adelaide, with Schumacher touching the side of the McLaren.[1]

With that Coulthard was away, leaving Schumacher to fend off Häkkinen, who had watched all of the action ahead of him.[1] Unsurprisingly Schumacher was even more stubborn defending from the Finn, with the pair battling through their second stops too.[1]

Yet, try as he might Häkkinen could not force the issue, and it was only when Schumacher's engine failed on lap 53 that the Finn finally moved into second.[1] By that stage Coulthard was fifteen seconds clear, with Häkkinen only able to match the Scot's pace for the rest of the race.[1]

As such, Coulthard was left to cruise across the line and claim a dominant victory, his third of the campaign.[1] Häkkinen secured second ahead of Barrichello, with Villeneuve, Ralf Schumacher and Jarno Trulli claiming the remaining points.[1]

The full entry list for the 2000 French Grand Prix is outlined below:

The full qualifying results for the 2000 French Grand Prix are outlined below:

The full results for the 2000 French Grand Prix are outlined below:

At the halfway point in the season it was Michael Schumacher who led the Championship hunt, with the French Grand Prix only the second time that the German ace had failed to score in 2000. David Coulthard was his closest challenger on 44 points, some twelve behind, while defending Champion Mika Häkkinen sat in third on 38. Rubens Barrichello was next, already an outsider for the Championship, with Giancarlo Fisichella completing the top five.

In the Constructors Championship it was Ferrari who led the way at the halfway mark, leaving France with 88 points. Their lead was a narrow one however, for McLaren-Mercedes' one-two in France left them just six behind the Scuderia, with the duo set to duel for the crown across the remaining eight rounds. Behind, Benetton-Playlife were best of the rest in third on eighteen points, some 70 off the lead, with Williams-BMW just a point behind them.