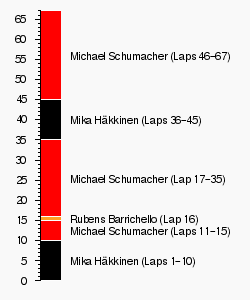 The 2000 European Grand Prix, otherwise officially sponsored as the XLIV Warsteiner Grand Prix of Europe, was the sixth round of the 2000 FIA Formula One World Championship, staged at the Nürburgring in Nürburg, Germany, on the 21 May 2000.[1] The race would see Michael Schumacher claim victory on home soil, as rain gave the German ace a chance to beat the two McLaren-Mercedes.[1]

Indeed, qualifying had seen the two McLarens enjoy an exclusive duel for pole, with David Coulthard ultimately emerging ahead of Mika Häkkinen.[1] Schumacher would, however, manage to squeeze between them after Häkkinen made a mistake on his fastest lap, while Rubens Barrichello secured fourth.[1]

The start saw Coulthard make a poor start, allowing Häkkinen to storm into the lead, while Schumacher held onto second.[1] Coulthard was hence left to fight with fellow number two Barrichello into the first corner, as Jacques Villeneuve and Ralf Schumacher squabbled behind.[1]

Further back there would be an early collision, with Jarno Trulli bouncing off the side of Giancarlo Fisichella and breaking his suspension.[1] Heinz-Harald Frentzen was also in trouble, being punted off by the two Arrows-Supertecs as they tried to scramble up the order.[1]

Come the end of the opening lap Häkkinen held a half second lead over Schumacher, with Coulthard and Barrichello watching on.[1] The top four subsequently eased clear during the early stages to leave Villeneuve in fifth, with the Canadian fulfilling his usual role of backing up the midfield.[1]

Villeneuve would eventually slip behind Ralf Schumacher and Fisichella, as Michael Schumacher tried to pressure Häkkinen for the lead.[1] However, there would be no changes among the top four, with rain appearing on lap ten to add a little bit of intrigue.[1]

Barrichello was the first to benefit, slithering ahead of Coulthard as the rain steadily increased, while Ralf Schumacher slipped back down the field.[1] Heavy rain then began to pound the circuit midway through lap twelve, prompting Johnny Herbert to begin an en-masse charge into the pits for wet tyres.[1]

Michael Schumacher and Häkkinen came in together on lap fifteen, although both had issues during their stops.[1] Ultimately, however, Schumacher's crew were able to get the #3 Ferrari out ahead of the #1 McLaren, with Häkkinen slipping down to fifth.[1]

Once the remaining drivers made their stops it was Schumacher leading from Coulthard, Häkkinen and Fisichella, while Barrichello, the last of the leaders to stop slipped to ninth.[1] Schumacher duly began to ease away from Coulthard, who duly let a charging Häkkinen through once it became clear that the Finn was faster.[1]

Indeed, with the conditions remaining wet but stable there was no need to try and conserve tyres, with everyone needing to make atleast one more stop for fuel.[1] As such, Häkkinen and Schumacher would exchange "fastest" laps as the Finn tried to hunt down the German, with the pair ultimately split by ten seconds after their second stops.[1]

With that the fight for lead was over, with Schumacher able to keep Häkkinen at bay in the final laps to secure victory.[1] Coulthard, meanwhile, would claim third ahead of Barrichello, who had recovered to fourth using a three-stop strategy, while Fisichella and Pedro de la Rosa completed the points scorers.[1]

The full entry list for the 2000 European Grand Prix is outlined below:

The full qualifying results for the 2000 European Grand Prix are outlined below:

The full results for the 2000 European Grand Prix are outlined below:

Victory for Michael Schumacher left the German ace with 46 points to his name in 2000, having claimed the win in four of the opening six rounds. Mika Häkkinen had hence lost ground in second, slipping eighteen behind, while David Coulthard retained third on 24. Rubens Barrichello and Ralf Schumacher completed the top five, while Pedro de la Rosa had become the thirteenth scorer of the season.

In the Constructors Championship Ferrari had marginally increased their lead, moving onto 62 points for the campaign. That left them ten ahead of McLaren-Mercedes in second, with a huge 37 point gap between themselves and compatriots Williams-BMW in third. Elsewhere, Benetton-Playlife had moved back ahead of Jordan-Mugen-Honda, while Arrows-Supertec were on the board in eighth.