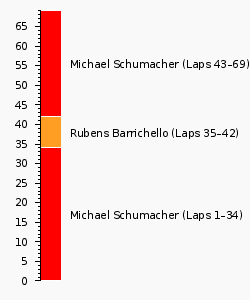 The XXXVIII Grand Prix Air Canada, otherwise known as the 2000 Canadian Grand Prix, was the eighth round of the 2000 FIA Formula One World Championship, staged at the Circuit Gilles Villeneuve in Montreal, Canada, on the 18 June 2000.[1] The race would see Michael Schumacher claim victory, after Ferrari controversially used team orders late on to prevent Rubens Barrichello from attacking his teammate.[1]

The start of the race saw Schumacher and Coulthard battle for the lead into the first corner, with the German racer just managing to prevent the Scot from lunging ahead.[1] Behind, Häkkinen would get the jump on Barrichello to claim third, only for Villeneuve to sprint past the pair of them in the BAR-Honda.[1]

Indeed, Villeneuve's intervention would force Häkkinen wide, with the Finn subsequently slipping back behind Barrichello through turn two.[1] Up ahead, meanwhile, Schumacher and Coulthard would break clear during the early stages, with Villeneuve unable to match the leaders' pace.[1]

Coulthard would remain glued to Schumacher's tail throughout the early laps, while Villeneuve had a train of cars stuck to his rear wing.[1] Indeed, Barrichello, Häkkinen, Frentzen and Pedro de la Rosa would all find themselves stuck behind the BAR-Honda, which was strong enough on the straights to prevent anyone from slipstreaming past.[1]

Unfortunately any hopes of a race long fight for the lead were ended on lap ten, with the FIA slapping a ten second stop-go penalty on Coulthard, whose mechanics had worked on the car on the grid after the fifteen second warning.[1] He duly served his penalty on lap fourteen, rejoining in tenth position as Häkkinen tried an unsuccessful lunge on Barrichello for third.[1]

Villeneuve's resistance was finally broken by Barrichello on lap 25, with the Brazilian quickly pulling away to chase after Schumacher.[1] Häkkinen lost a few more laps behind the Canadian racer before he too managed to break clear, while Coulthard spun further down the field after hitting an oil slick.[1]

Rain began to drift across the circuit as the field came to make their pitstops, prompting most of the field to swap to wets.[1] The biggest benefactor of this was Giancarlo Fisichella, who shot through to second having been one of the first to swap.[1] He would, however, hand second to Barrichello with a small mistake on lap 47.[1]

The rest of the race would see Barrichello continue his steady assault on Schumacher's lead, aided by a few unusual errors from the German ace.[1] Yet, Ferrari ultimately decided to prevent Barrichello from challenging the Championship leader, although the Brazilian would close right onto the German's tail.[1]

Indeed, Schumacher ultimately claimed his fifth win of the season by just 0.1s from Barrichello, with the rain falling ever harder in the closing laps.[1] Behind, Fisichella completed the podium ahead of Häkkinen, while Jos Verstappen and Jarno Trulli completed the points ahead of a recovering Coulthard.[1]

The full entry list for the 2000 Canadian Grand Prix is outlined below:

The full qualifying results for the 2000 Canadian Grand Prix are outlined below:

The full results for the 2000 Canadian Grand Prix are outlined below:

Retrieved from "https://f1.fandom.com/wiki/2000_Canadian_Grand_Prix?oldid=85183"
Community content is available under CC-BY-SA unless otherwise noted.