Formula 1 Wiki
Register
Don't have an account?
Sign In
Advertisement
in: 2000 Grands Prix, British Grand Prix, Formula One races in the United Kingdom 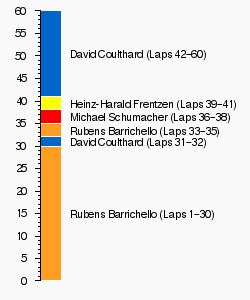 The 2000 British Grand Prix, otherwise officially advertised as the LIII Foster's British Grand Prix, was the fourth round of the 2000 FIA Formula One World Championship, staged at the Silverstone Circuit in Northamptonshire, UK, on the 23 April 2000.[1] The race would see David Coulthard battle his way to victory on home soil, as the English spring weather played havoc on and off the circuit.[1]

Quite why the British Grand Prix of 2000 was held in April was never made clear, with the FIA refusing to give an official answer.[1] The most convincing explanation came through the various late changes to the calendar ahead of the season, with the addition of the US Grand Prix and the reintroduction of the Belgian Grand Prix, causing a lot of mid-year congestion.[1]

Into the Silverstone weekend itself and Rubens Barrichello would be the star in qualifying, securing a maiden pole position for Ferrari.[1] The Brazilian just edged out Heinz-Harald Frentzen by 0.003s, while the two McLaren-Mercedes of Coulthard and Mika Häkkinen shared the second row.[1]

The start of the race saw Barrichello and Frentzen make even starts, while the two McLaren's worked together to deny Championship leader Michael Schumacher.[1] The German racer hence slipped back from fifth to eighth, with Jenson Button, Jacques Villeneuve and Ralf Schumacher streaking past.[1]

Barrichello would do his best to break free during the early stages, with the entire top eight moving clear of Jarno Trulli in ninth.[1] Yet, the Brazilian would be unable to escape more than a second from the nose of Frentzen's Jordan-Mugen-Honda, with the German racer himself having to watch out for third placed Coulthard.[1]

Indeed, the entire top eight ran nose-to-tail through until lap 24, when Frentzen and Ralf Schumacher peeled off to make their pitstops.[1] Coulthard, now released from the Jordan used his brief spell of clear air to draft onto the back of Barrichello, before dancing his McLaren around the outside of #4 Ferrari at Stowe to claim the lead.[1]

With that Coulthard was away, throwing everything at the Silverstone circuit in a bid to break away from the Barrichello train.[1] Behind, Häkkinen came in to make his stop on lap 31, rejoining in eighth, while Coulthard stopped two laps later and rejoined ahead of the Finn.[1]

Barrichello stayed out for a further two laps, although a spin caused by a faltering gearbox signalled the end of his race.[1] Schumacher, meanwhile, would be the last of the leaders to stop having moved into the lead, and duly set a series of quick laps to close onto the back of Häkkinen after his stop.[1]

Frentzen moved back into the lead, although his second stop on lap 42 ensured that Coulthard moved back ahead.[1] Button and Ralf Schumacher subsequently stopped on the following laps to leave Häkkinen in second ahead of Michael Schumacher, while Frentzen shuffled down to fourth.[1]

With that the race was over, with Coulthard surviving a late gearbox issue to claim victory ahead of Häkkinen, the first McLaren one-two of the season.[1] Schumacher, meanwhile, would claim a lonely third ahead of Ralf Schumacher, Button and Trulli, Frenzen having dropped out late on with a gearbox issue.[1]

The full entry list for the 2000 British Grand Prix is outlined below:

The full qualifying results for the 2000 British Grand Prix are outlined below:

The full results for the 2000 British Grand Prix are outlined below: