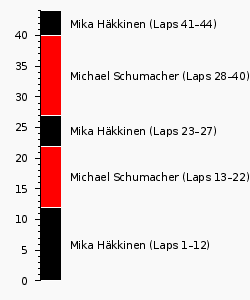 The 2000 Belgian Grand Prix, otherwise officially known as the LVIII Foster's Grand Prix de Belgique, was the thirteenth round of the 2000 FIA Formula One World Championship, staged on the 27 August 2000 at the Circuit de Spa-Francorchamps in Spa, Belgium.[1] The race would see Mika Häkkinen claim victory ahead of Michael Schumacher, having pulled off one of the most audacious overtakes in F1 history to pass the German ace late on.[1]

Häkkinen would start the weekend by claiming pole position, beating Jarno Trulli by three quarters of a second in qualifying.[1] Schumacher, meanwhile, would line up in fourth behind Jenson Button, with David Coulthard, the third man in the title fight, down in fifth.[1]

Rain would pound the circuit before the race, with a lot of water lying on the circuit meaning that the race would start behind the Safety Car.[1] Furthermore, everyone bar Pedro Diniz would start on full wet tyres, a wise decision given that the Brazilian racer proceeded to spin behind the safety car.[1]

The safety car came in at the end of the opening tour, releasing Häkkinen to claim the lead.[1] The Finn duly began to ease clear of Trulli, being the only man to have a clear, sprayless, view.[1] Diniz, meanwhile, would tumble to the back of the field, but would opt to remain on his slick tyres.[1]

The early stages saw Häkkinen continue to ease away, while Trulli came under attack from both Button and Schumacher.[1] The Brit's first attack on the Italian would end in failure, running wide at the Bus Stop to gift Schumacher third, before the German ace lunged past the Italian at La Source on lap five.[1]

Button tried to follow Schumacher through, but only managed to tip Trulli into a race ending spin, while he was passed by Coulthard and Ralf Schumacher.[1] The Schumacher brothers subsequently became the first of the lead drivers to pit for slicks on the following lap, with Jean Alesi, the first to swap to slicks on lap four, setting fastest laps.[1]

The rest of the field duly made their stops over the following three laps, leaving Häkkinen at the head of the field ahead of Schumacher, while Ralf Schumacher leapt up to third.[1] Alesi was, however, the biggest winner, climbing to fourth ahead of Button, while Coulthard slipped back to ninth.[1]

Häkkinen was forced to push now that Michael Schumacher was behind him, and duly made his first mistake of the weekend, sending himself spinning after clipping a kerb.[1] The Finn rejoined behind the #3 Ferrari after scrambling across the grass, with the German ace able to ease clear of the Finn.[1]

Schumacher duly made his scheduled stop a few laps later, prompting McLaren to tell Häkkinen to push on once again.[1] He subsequently stopped on lap 27, with the rest of the field making their stops by the end of lap 34.[1]

Into the closing stages and Häkkinen was slowly catching Schumacher, and duly launched his bid for the lead on lap 40, sending a lunge at Les Combes that was swatted aside, literally, by the Ferrari.[1] The Finn then sat back and plotted his next attempt, which would come a lap later at the very same spot.[1]

Crucially, however, the pair would come across Ricardo Zonta as they shot towards Les Combes, with Schumacher going to the outside of the BAR-Honda, while Häkkinen squeezed inside the Brazilian.[1] The McLaren duly pulled level with the Ferrari as Zonta backed off, before lunging on the brakes later than Schumacher's Ferrari to claim the lead.[1]

With that the race was over, with Häkkinen sliding through to claim victory by a second from Schumacher.[1] Schumacher's brother Ralf duly secured third ahead of a recovering Coulthard, while Button and Heinz-Harald Frentzen claimed the remaining points.[1]

The full entry list for the 2000 Belgian Grand Prix is outlined below:

The full qualifying results for the 2000 Belgian Grand Prix are outlined below:

The full results for the 2000 Belgian Grand Prix are outlined below:

Retrieved from "https://f1.fandom.com/wiki/2000_Belgian_Grand_Prix?oldid=85258"
Community content is available under CC-BY-SA unless otherwise noted.