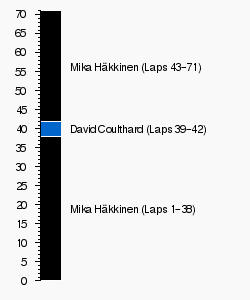 The 2000 Austrian Grand Prix, otherwise known as the XXIV Großer A1 Preis von Österreich, was the tenth round of the 2000 FIA Formula One World Championship, held at the A1 Ring in Spielberg, Austria, on the 16 July 2000.[1] The race would see Mika Häkkinen claim victory effectively at the start of the race, with himself and teammate David Coulthard untouchable at the head of the field.[1]

Qualifying had seen the two McLaren-Mercedes begin the weekend in dominant fashion, with Häkkinen beating teammate Coulthard to pole position.[1] Championship leader Michael Schumacher, meanwhile, would be beaten to third by his teammate Rubens Barrichello, while Jarno Trulli was over a second off in fifth.[1]

The start saw Häkkinen sprint away from Coulthard to claim an early lead, while Barrichello held onto third ahead of Schumacher.[1] However, both Ferraris were vulnerable heading into the first corner, and were duly collected by the combined efforts of Trulli and Ricardo Zonta.[1]

Schumacher was left with smashed suspension at the side of the circuit, meaning the Safety Car was required to remove the Ferrari safely.[1] Barrichello, in contrast, would continue, although he slipped down behind Mika Salo, Pedro de la Rosa and Johnny Herbert.[1]

The safety car stayed out through to the end of the second tour, where Häkkinen made a strong restart to blast away from Coulthard.[1] The Scot himself, meanwhile, would manage to leap clear in second, aided by de la Rosa sending a lunge at Salo into the first corner to claim third.[1]

With that the fight for victory was effectively over, for Häkkinen was able to ease away from Coulthard, while both dropped de la Rosa at a stunning rate.[1] Indeed, de la Rosa's biggest contribution would be to bunch the field behind him early on, allowing Barrichello to pick his way past Herbert and Salo during the early stages.[1]

Yet, as Barrichello moved into fourth de la Rosa's pace improved, with the Spaniard opening out a six second gap as Salo tried to defend from the Brazilian.[1] Indeed, the damaged Ferrari was simply unable to drastically out-pace the Arrows-Supertec, with Barrichello barely making a dent in the Spaniard's advantage.[1]

The pitstop window ultimately proved to be Barrichello's salvation, for de la Rosa retired with a gearbox failure during his stop.[1] Out front, meanwhile, Häkkinen would stop and rejoin in second, briefly handing the lead to Coulthard, before the Scot made his stop to slip back behind the Finn.[1]

The rest of the race would be focused on the battle for fourth, with Jacques Villeneuve defending from Jenson Button and Salo, who had slipped down the order after Barrichello's move.[1] Their fight would become increasingly intense, with Button running off circuit when a lunge for fourth saw Villeneuve force him wide.[1]

Out front, meanwhile, there was no stopping Häkkinen, who cruised across the line twelve seconds clear of Coulthard to claim victory.[1] Barrichello was next, half a minute behind as the last man on the lead lap, while Villeneuve held off both Button and Salo to claim fourth.[1]

There would, however, be some controversy after the race, with Häkkinen's car officially failing post-race scrutineering after the scrutineers discovered a missing compulsory seal in the McLaren's electrical systems.[1] McLaren appealed Häkkinen's initial exclusion, with an FIA tribunal concluding that there were no irregularities in the electrical systems of the #1 car.[1] As such, Häkkinen would retain victory and the ten Championship points, although McLaren would not be granted the points, and were fined an additional $50,000 as punishment for their mistake.[1]

At the halfway point in the season it was Michael Schumacher who led the Championship hunt, with the French Grand Prix only the second time that the German ace had failed to score in 2000. David Coulthard was his closest challenger on 44 points, some twelve behind, while defending Champion Mika Häkkinen sat in third on 38. Rubens Barrichello was next, already an outsider for the Championship, with Giancarlo Fisichella completing the top five.

In the Constructors Championship it was Ferrari who led the way at the halfway mark, leaving France with 88 points. Their lead was a narrow one however, for McLaren-Mercedes' one-two in France left them just six behind the Scuderia, with the duo set to duel for the crown across the remaining eight rounds. Behind, Benetton-Playlife were best of the rest in third on eighteen points, some 70 off the lead, with Williams-BMW just a point behind them.

The full entry list for the 2000 Austrian Grand Prix is outlined below:

The full qualifying results for the 2000 Austrian Grand Prix are outlined below:

The full results for the 2000 Austrian Grand Prix are outlined below:

With Michael Schumacher being taken out at the first corner in Austria the Championship battle had become very interesting leaving Austria, with just eight points separating the top three. Indeed, Schumacher's lead over second placed David Coulthard had been cut to just six points, while victory for Mika Häkkinen had moved the Finn to within two of his teammate. That meant both were within a race win of Schumacher's 56 point tally, with momentum behind them.

In the Constructors Championship the post-race decision to dock McLaren-Mercedes the point for victory may have proved crucial in the title battle, for it kept Ferrari at the head of the hunt. Indeed, the Scuderia left Austria with a four point advantage over their Anglo-German rivals, who would otherwise have left Spielberg with a six point lead. Behind, Williams-BMW had moved back into third ahead of Benetton-Playlife, while BAR-Honda jumped ahead of Jordan-Mugen-Honda.