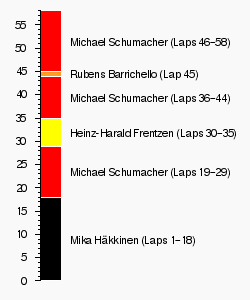 The 2000 Australian Grand Prix, otherwise officially advertised LXV Qantas Australian Grand Prix, was the opening round of the 2000 FIA Formula One World Championship, staged at the Albert Park Circuit in Melbourne, Australia, on the 12 March 2000.[1] The race would see Michael Schumacher sweep to victory ahead of new Ferrari teammate Rubens Barrichello, signalling the start of a new era of domination.[1]

It had been a winter with a lot of changes on the driver front, with Barrichello joining the Scuderia, while Eddie Irvine took the Brazilian's old seat at the new Jaguar-Ford Cosworth team.[1] Elsewhere, Williams hired promising British youth Jenson Button to partner Ralf Schumacher, while 1996 World Champion Damon Hill was replaced by Jarno Trulli at Jordan-Mugen-Honda.[1]

There would also be a new team and two returning engine suppliers on the grid, with Ford taking full control of the Stewart, and duly reforging them as Jaguar Racing.[1] Williams, meanwhile, secured a multi-year deal with BMW for engines and sponsorship, while Honda made their full F1 return, partnering with BAR.[1] Renault, meanwhile, were plotting their return to F1, having purchased a controlling stake in Benetton.[1]

Qualifying, however, had seen the status-quo of 1999 effectively maintained, for defending World Champion Mika Häkkinen claimed pole position ahead of his teammate David Coulthard.[1] Schumacher would hence start from third ahead of Barrichello, while Heinz-Harald Frentzen was a strong fifth for Jordan ahead of new teammate Trulli.[1]

The start saw the two McLaren-Mercedes carry on their strong form, sweeping into the first corner in grid order.[1] In contrast the two Ferraris would make poor starts, allowing Frentzen to sprint ahead of Barrichello, before entertaining an ambitious lunge around the outside of Schumacher into turn one.[1]

Häkkinen and Coulthard quickly established a lead out front, while Schumacher tried in vain to keep pace behind them.[1] Elsewhere, debutante Button made a strong start, gaining six places off the grid, fellow debutante Nick Heidfeld received a welcoming whack from Marc Gené, while Johnny Herbert became the first retirement of the year with a clutch failure.[1]

Back with the leaders and Coulthard's pace suddenly collapsed on lap ten, his Mercedes engine having picked up a misfire.[1] He pitted at the end of the lap, only for McLaren to send him back out again having been unable to find a quick cure.[1] The Scot's race was over soon after.[1]

There would be more bad news for McLaren just moments later, for Häkkinen's race lead would be completely wiped out by the first appearance of the Mercedes-Benz Safety Car.[1] The cause was Pedro de la Rosa, who had left bits of his Arrows littering the back of the circuit after a steering failure, with Eddie Irvine also retiring having been struck by the debris.[1]

When the race resumed Häkkinen immediately sprinted clear to rebuild his lead, and hence had Schumacher already settling for second.[1] That was, until his Mercedes engine cried enough on lap nineteen, with an identical failure to that of Coulthard ending his race in a cloud of white smoke.[1]

Schumacher duly moved into the lead ahead of Frentzen and Barrichello, with the Brazilian unable to find a way past the Jordan.[1] Ferrari hence opted to alter his pitstop strategy, short-fuelling the #4 Ferrari in a switch to a two-stop in order to leap frog a one-stopping Frentzen.[1]

The plan looked to have backfired when Barrichello rejoined behind Button, and he would lose a lot of time dealing with the Williams-BMW.[1] Yet, once clear the Brazilian would deliver a series of impressive laps, although his efforts proved to be in vain when Frentzen suffered a hydraulic leak.[1]

With that the race was over, with Schumacher cruising across the line with an eleven second lead over Barrichello.[1] Ralf Schumacher, meanwhile, would survive a series of retirements to claim third for Williams-BMW, while Jacques Villeneuve scored the first ever points finish for BAR with fourth.[1] Giancarlo Fisichella was next ahead of Mika Salo, although a post-race disqualification for the Finn promoted Ricardo Zonta into the points.[1]

The mood for Ferrari's start of year press conference was both calm and relaxed as ahead of the serious business of the press grilling at the Shell House, both Michael Schumacher and Rubens Barrichello arrived cheerfully pushing 7 year old younger Teaghan Santamaria into the room onboard a miniature Ferrari model.[2] Following Schumacher's assurances that the $900 Ferrari be offered to her, Santamaria commented that Schumacher was "really nice"[2] From a distance, observer and new rival, Jenson Button simply observed that the whole incident was rather "cute"[2]

The full entry list for the 2000 Australian Grand Prix is outlined below:

The full qualifying results for the 2000 Australian Grand Prix are outlined below:

The full results for the 2000 Australian Grand Prix are outlined below:

Michael Schumacher started the 2000 season as the man to beat with victory in Australia, leaving the opening round with ten points. Rubens Barrichello opened his account in second ahead of Ralf Schumacher, while Jacques Villeneuve was on the board for the first time since the 1998 Japanese Grand Prix. The other drivers on the scoresheet after the opening race were Giancarlo Fisichella and Ricardo Zonta.

There were just four scorers in the Constructors Championship after the opening race of the season, with Ferrari already holding a daunting lead of twelve points. Behind, Williams-BMW were in second, level with BAR-Honda but ahead courtesy of Ralf Schumacher's podium, while Benetton-Playlife rounded out the scorers.