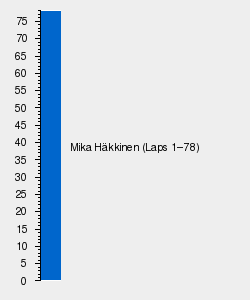 The 1998 Monaco Grand Prix, officially known as the LVI Grand Prix de Monaco, was the sixth race in the 1998 Formula One Season. Mika Häkkinen achieved his second grand chelem at Monaco when he took pole position, fastest lap as well as leading every single lap of the race.

Two weeks prior to the race weekend, numerous teams participated in various mid-season tests at a variety of circuits.

Heading into Monaco, it was announced that Arrows chief designer John Barnard had also joined Prost as a technical consultant, his company B3 Technologies taking over the manufacturing of Prost's carbon fibre suspensions. Despite Barnard's new role at Prost, he denied that anything was amiss with Arrows and would remain with the team to at least the end of the season. Prost team principal Alain Prost also announced an expression in interest for Michelin tyres for 1999, after expressing dissatisfaction with Bridgestone due to what was perceived as favouritism towards McLaren and Benetton.

In the week leading up to the Monaco Grand Prix, all the teams with the exception of Stewart were testing throughout Europe in preparation for the race. Goodyear would be releasing an updated wider rear-tyre for their teams in order to reduce the performance deficit to the Bridgestone teams.

The full entry list for the 1998 Monaco Grand Prix is outlined below:

The full practice results for the 1998 Monaco Grand Prix are outlined below:

Mika Häkkinen was the first of the front runners to come out of the pits for his timed lap, setting the initial provisional pole time of 1:21.375. There was a brief time of inactivity as the Tyrrell's and Arrows's were the only cars on track. Mika Salo in the Arrrows had looked competitive all weekend and was set for a strong qualifying.

Heinz-Harald Frentzen was the next of the front runners to go out setting provisional second in his Williams before it was immediately taken away by the feisty of Benetton of Giancarlo Fisichella who had set the fastest time in the morning practice. Ferrari were having a nightmare weekend, Michael Schumacher only set one lap in morning practice due to a fuel pump issue forcing him to use the spare car in qualifying. Nevertheless despite the mishaps Schumacher was immediately on the pace stealing third place from Fisichella, with the two McLaren's of Häkkinen and David Coulthard.

Twenty minutes into the session Coulthard took pole from Häkkinen with a 1:20.137 as Fisichella reclaimed third from Schumacher. Shortly afterwards Eddie Irvine suffered an accident whilst heading into rascasse, forcing him to temporarily abandon the session. With Schumacher in the spare car, Irvine was forced to compete in Schumacher's hastily repaired race car for the rest of the session. He finished qualifying in a lackluster seventh.

Häkkinen and Coulthard traded fastest times each stealing pole from one another until Häkkinen finally set a time of 1:19.798 which secured the final pole position time. Coulthard finished the session ahead of Fisichella and Schumacher.

Frentzen appeared reasonably competitive in his Williams taking fifth on the grid, teammate Jacques Villeneuve had a torrid session enroute to thirteenth on the grid. Villeneuve was on course to be higher, however the remarkably slow Tyrrell of Ricardo Rosset spun towards the end of the session, bringing out the red flags forcing not only Villeneuve but Schumacher and Coulthard to abandon their final quick laps. Rosset for the second race in a row would not qualify for the race.

Alexander Wurz was sixth ahead of Irvine and the impressive Mika Salo whose Arrows appeared to unfulfill its potential as Salo battled with a gearbox issue throughout qualifying.

The full qualifying results for the 1998 Monaco Grand Prix are outlined below:

The full grid for the 1998 Monaco Grand Prix is shown below:

As the lights went out, there was little change at the front of the field as the cars made their way through the first corner. Only Alexander Wurz in the Benetton made any progress, managing to pass Heinz-Harald Frentzen for fifth. The first retirement occured as the cars came up the hill into turn 3, Esteban Tuero's Minardi from last place ran wide and collided with the barriers bringing his day to an early end. Jean Alesi made a strong start climbing to ninth from eleventh at the end of the first lap, past teammate Johnny Herbert and Jarno Trulli. Herbert losing position to Trulli as well.

As the McLaren's seemed to customarily pull away from the rest of the field, Schumacher was seemingly being held up in fourth position by Giancarlo Fisichella's Benetton. However Häkkinen was unable to pull out as great an advantage over Coulthard as he had done in the past, Coulthard managing to set the fastest lap on lap 5 with a 1:25.118. Lap 6 saw Wurz who was baring down on Fisichella and Schumacher run wide coming out of the tunnel losing a little bit of time.

On lap 8 Coulthard set another fastest lap with a 1:24.888 quickly catching up to race leader Häkkinen. Meanwhile a battle for sixth commenced with the slow Williams of Heinz-Harald Frentzen holding up Eddie Irvine's Ferrari. Irvine stuck behind the Williams for a number of laps had allowed Mika Salo's Arrows to catch up to the pair. On lap 9, the frustrated Irvine made a dive up Frentzen's inside at the loewes hairpin, the overambitious move forced Frentzen off the circuit and into the barriers causing the Williams to retire.

Lap 11 saw Rubens Barrichello pull into the pits to retire due to a suspension failure. Coulthard on lap 12 set another fastest time of 1:23.489 followed two lap later by another fastest lap of 1:23.311. The two leaders by this time had caught up to the first set of backmarkers of Olivier Panis's Prost and Shinji Nakano's Minardi. On lap 16, Häkkinen responded to Coulthard's fastest time with a 1:22.996. The following lap Coulthard suffered a major engine failure coming out of the tunnel forcing him out of the race.

This meant that Häkkinen was left unchallenged at the front with a 19 second lead over Fisichella in second. Jarno Trulli led a battle for eighth place as Johnny Herbert and Pedro Diniz climbed over his rear. Further down the field Damon Hill and Ralf Schumacher duelled for fourteenth. Schumacher performed an illegal overtake on Hill cutting the corner after the tunnel, forcing to re-concede the position to Hill.

Lap 29 saw Häkkinen set another fastest lap of 1:22.948 as he further consolidated his lead. On lap 30, Michael Schumacher came into the pits for his first pit-stop losing a single position to Alexander Wurz. The same lap Jan Magnussen retired with suspension problem, a similar failure to teammate Barrichello. The following lap Fisichella came into the pits, however Schumacher with the undercut was able to overtake Fisichella in the pit-stop phase.

On lap 37 Häkkinen came in for his pit-stop, exiting the pits comfortably in the lead. By this time Schumacher had caught up to Wurz in second and began to apply the pressure. On lap 38 Schumacher dived up Wurz's insider at the loewes hairpin, Wurz refused to yield and the two touched. Schumacher however managed to force his way past in the following corner. However Schumacher in his manoeuvere, damaged his rear track rod forcing him into the pits. Schumacher exited the car as if to retire before immediately being told to re-enter the car by Ross Brawn. The Ferrari cars managed to repair the car and released Schumacher back onto the track albeit three laps down and well out of the points.

On lap 41 Wurz finally came into the pits for his first pit-stop, releasing teammate Fisichella back into second as Wurz exited in third position. As Wurz entered the tunnel on his out-lap, he lost control of his Benetton crashing into the barriers, as his car exited the tunnel it was already a wreck losing both his front wheels and flying uncontrollably into the barriers a big way at the nouvelle chicane. The cause of incident linked to a failure on a component of the car following his shunt with Schumacher.

Three laps later Ralf Schumacher retired from the race with rear suspension failure. By lap 45, Häkkinen had extended his lead to 27 seconds over Fisichella in second. Lap 49 saw Olivier Panis retire with a wheel issue. Seven laps later Jarno Trulli retired with gearbox failure. The same lap, Fisichella whilst racing in second place clipped the side of the inside barrier at rascasse forcing him to spin around. Luckily for him the car did not receive damage and his lead over Eddie Irvine in second was sufficient enough for him to retain his second position.

After suffering with a gearbox issue for a number of laps, Jean Alesi's Sauber retired on lap 72 from fifth position. The distraught Alesi fell to his knees beside the race track. This promoted Jacques Villeneuve into fifth position and Pedro Diniz into sixth.

On the final lap Michael Schumacher attempted to unlap himself from Pedro Diniz's Arrows on the final lap, Schumacher however botched the overtake and clipped the inside barrier losing his front wing.

Häkkinen after 78 laps took his fourth victory of the season, 11 seconds ahead of Fisichella in second. Irvine was the sole Ferrari to claim points in third. Villeneuve split the two Arrows cars of Mika Salo and Pedro Diniz who took a strong three points for the Arrows team.

The full results for the 1998 Monaco Grand Prix are outlined below: