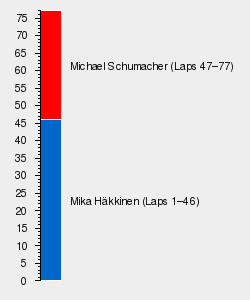 The 1998 Hungarian Grand Prix was the twelfth round of the 1998 Formula One Season. The race was won by the Ferrari of Michael Schumacher ahead of David Coulthard and Jacques Villeneuve.

Following the German Grand Prix, a week of testing occured prior to the Hungarian race. Most of the teams were at the Circuito de Jerez for the pre-race tests, with McLaren-Mercedes team leading the pace in the tests. Williams-Mecachrome had also ran well, hoping they finally had the pace to challenge the McLaren and Ferrari leaders in Hungary, following their first podium of the season in Germany. Unlike most other teams, Ferrari were not testing in Jerez and instead conducted their testing at their private test track at Fiorano.

Going into Hungary, Mika Häkkinen held a sixteen point lead over Michael Schumacher in the driver's championship. Häkkinen's teammate David Coulthard was in third place 34 points down on Häkkinen. Coulthard at this point had conceded his own championship ambitions and would instead focus on assisting teammate Häkkinen to the 1998 title. McLaren also led the constructor's championship, 26 points ahead of Ferrari.

The full entry list for the 1998 Hungarian Grand Prix is outlined below:

The morning practice session saw torrential rain affect the run times of the driver's in the first session. Times were slow as the cars struggled around the circuit wrestling for grip. The afternoon session faired better weather, whilst the circuit remained quite wet, the rain of the morning did not return. As the track began to dry, faster lap times were produced by the cars. At session's end it was David Coulthard leading the time sheets ahead of teammate Mika Häkkinen and Michael Schumacher. Eddie Irvine, Jacques Villeneuve and Damon Hill rounded out the top six.

The Saturday practice session turned out to be an eventful session for the driver's involved. The session saw many cars spinning and going into the gravel traps, David Coulthard, Michael Schumacher and Jacques Villeneuve all had their excursions with the gravel trap whilst Toranosuke Takagi and Esteban Tuero ended their sessions by spinning into the barriers. Ricardo Rosset was causing trouble when early on in the session, he first collided with Ralf Schumacher and then towards the end of the session he careered into the back of Jos Verstappen, causing significant damage to the rear of the Stewart driver's car.

The full practice results for the 1998 Hungarian Grand Prix are outlined below:

Mika Hakkinen took pole position having dominated the session from start to finish.

Michael Schumacher started from third - ahead of teammate Eddie Irvine went through practice almost unnoticed, but managed to produce a decent qualifying lap to take 5th.

Jordan driver Damon Hill drove a storming final lap - despite traffic and surface gravel on the track - to start from fourth on a circuit where he has never finished lower than second. Hill would start behind the two Ferrari drivers. Team mate Ralf Schumacher struggled round the circuit and will start in tenth.

Williams started with completely different wing configurations for each driver. Frentzen, suffering from a crippling stomach upset, went conventional but Villeneuve opted for a low downforce/high straight speed wing set up. In the end it was the resurgent Canadian who made 6th, with the German one place behind.

Behind the Williams come the Benettons, with Fisichella leading Wurz for 8th place. The Italian was one of the first drivers out on the circuit, and all eyes were upon him when he rounded the final turn - and kept on going, through a gravel trap, before smashing his car sideways into a tyre wall. Incredibly, the plucky Roman kept the engine running and was able to drive away, albeit somewhat slowly, and limp round again to the pits. Wurz had looked to be well down the grid before producing his qualifying lap.

Fisichella's accident was made all the more public because a heat haze settled over the circuit immediately before the red lights went out. In need of a car to blow it away, all the garages kept their vehicles firmly in place until Jos Verstappen, out of practice after a prang with Rosset this morning, got bored of the waiting. The luckless Rosset failed to make the 107% mark for the third time this season and will not race for the second Grand Prix running. A crash in Germany saw him concussed and medically unable to race.

The weather was once again warm and sunny, after torrential rain in Friday practice, and threats of thunderstorms for raceday appear to have lifted.

The full qualifying results for the 1998 Hungarian Grand Prix are outlined below:

The full grid for the 1998 Hungarian Grand Prix is shown below:

Esteban Tuero became the first retirement on lap 13 with engine failure, however more significantly at the end of the same lap Eddie Irvine who was running well in fourth pulled into the pits to retire with gearbox issues.

Häkkinen then began to pull away when Coulthard and Schumacher got caught behind the backmarker of Jos Verstappen, once the pair had cleared the Stewart, they had lost a couple of seconds to the leading McLaren of Häkkinen.

Mika Salo then retired on lap 18 with gearbox failure. Jean Alesi then had on off-track moment, going wide into the gravel trap at turn 3, however the Sauber driver was able to continue without damage.

Damon Hill became the first of the front runners to come into the pits on lap 21, pitting from fourth position. The following lap Michael Schumacher pitted from third place. Responding to Ferrari's move, McLaren brought David Coulthard in the lap after Schumacher's stop. Coulthard exited ahead of Schumacher, with Jacques Villeneuve in between him and the Ferrari driver. Villeneuve who had yet to stop continued to hold up Schumacher.

Two laps later race leader Häkkinen came into the pits for his first stop, exiting the pits and maintaining his lead ahead of Coulthard.

Lap 28 saw Jarno Trulli pull into the pits and retire with engine failure.

Lap 30 saw Villeneuve finally come into the pits, his stop was slow as the mechanics had trouble attaching the left rear tyre. This allowed Damon Hill to reclaim fourth position from Villeneuve. With Villeneuve clearing out the way, Schumacher began setting some blistering lap times settting the fastest lap of the race.

Over the following laps both Coulthard and Schumacher began to close up on Häkkinen in the lead, Schumacher all over the rear of Coulthard's McLaren.

Rubens Barrichello then retired on lap 54 with gearbox issues.

Trouble occured for McLaren, Häkkinen's shock absorbers appeared to be damaged causing him to significantly slow and lose position to teammate Coulthard.

Villeneuve took fourth position away from Hill following the second round of pit-stops.

As the race entered its final stages, Schumacher came in for his final stop. Having extended his lead to 26 seconds, Schumacher came into the pits and exited continuing to maintain his lead. Meanwhile in third place, Häkkinen struggled for pace as Villeneuve and Hill began to bare down on him.

Alexander Wurz then retired from seventh with gearbox issues. As this occured Heinz-Harald Frentzen took fifth away from Häkkinen going into turn 10.

This allowed Schumacher took a dominant win, nine seconds ahead of Coulthard behind him. Schumacher notably lapping the crippled Häkkinen on the final lap. Villeneuve took third position, taking Williams's second podium in a row ahead of Damon Hill, Heinz-Harald Frentzen and the ailing Mika Häkkinen.