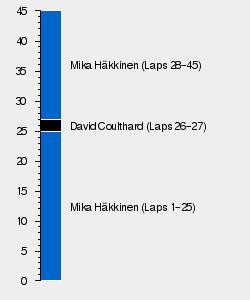 The 1998 German Grand Prix was the eleventh round of the 1998 Formula One Season. The race was won by Mika Häkkinen, who had taken his sixth win of the season. His teammate David Coulthard was second, with reigning champion Jacques Villeneuve securing his first podium finish of the season in third.

In Austria, Mika Häkkinen had increased his championship lead to eight points over main rival Michael Schumacher. His teammate David Coulthard was a further 30 points down. In the Constructor's championship, McLaren held a 12 point lead over Ferrari.

Germany was the home race of championship contender Michael Schumacher, his brother Ralf Schumacher and Heinz-Harald Frentzen. McLaren had confirmed before the weekend that their line-up of Mika Häkkinen and David Coulthard would be retained for 1999.

Ferrari would be bringing a revised and updated chassis to Germany to bring the fight to McLaren.

Mika Häkkinen and David Coulthard dominated the Friday practice sessions, the McLaren's being suited to the long straights within the Hockenheim circuit. Jean Alesi did well for Sauber to go third fastest whilst Damon Hill for Jordan was fourth.

The Ferrari drivers of Michael Schumacher and Eddie Irvine were fifth and sixth, testing out their new longer wheelbase Ferrari for the first time.

The Saturday practice sessions were once again dominated by McLaren, Coulthard led Häkkinen whilst Jacques Villeneuve was in a competitive third. Damon Hill was once again in fourth position. It was a dismal session for Michael Schumacher, the Ferrari driver managing to only complete six laps after spinning out in both sessions.

Ricardo Rosset had a major accident going into the barriers at the first corner at high speed. Although Rosset only suffered minor head injuries, he was barred from entering the qualifying session as a precaution. The implication of this was that due to his non-participation in qualifying he would be unable to qualify for the race.

Olivier Panis also had a big accident, forcing him to use the spare car in qualifying. Johnny Herbert suffered major gearbox issues which saw him only go nineteenth fastest.

The qualifying session would get underway with only twenty one competitors. Ricardo Rosset was not participating as a precaution following a heavy accident in the practice session.

The action was slow to get underway, with eleven minutes gone only Olivier Panis had set a lap time. However eventually the runners entered the track with Mika Häkkinen setting the early pace. His time however was quickly bested by teammate David Coulthard.

Damon Hill then moved into the third fastest time. Michael Schumacher had only managed to set the provisional fourth fastest time at this stage. Eddie Irvine was directly behind teammate Schumacher.

The two Williams cars then began to set their lap times, Heinz-Harald Frentzen went sixth fastest, however he was bumbed down by teammate Jacques Villeneuve who took the third fastest time.

Esteban Tuero then suffered a large engine failure, flames spurting from the back of his Minardi. Jean Alesi then improved his time to split the Ferrari's to go sixth fastest, ahead of Irvine and behind Schumacher.

Schumacher struggled to set a competitive time, his car appeared a handful as he continually locked-up his Ferrari on track. Villeneuve then took provisional pole position, the time did not last though the two McLaren's immediately responded with Coulthard taking provisional pole back before Häkkinen took the pole time.

Toranosuke Takagi then suffered a major accident going into the first corner, Takagi outbreaking himself flew into the barriers. Takagi emerged from the wreckage unhurt. Ralf Schumacher then took provisional fourth position ahead of teammate Hill.

Coulthard then suffered an engine failure, pulling off the circuit ruining his chances for pole position. Villeneuve looked set to take second position away from Coulthard, however going wide into the final corner ruined his chances.

Alexander Wurz then moved into fifth position, Giancarlo Fisichella then moved in behind him for sixth. Michael Schumacher struggling in eighth then got held up by the Arrows of Pedro Diniz. Schumacher angrily driving up alongside Diniz gesturing wildly for holding him up.

Eddie Irvine then improved to go fifth fastest. Takagi now in the spare car, then went off at the first corner once again, however managed to just keep it out of the barriers. Damon Hill then improved to move into fifth position, behind teammate Ralf Schumacher.

The start saw the two McLaren's maintain their lead from the start, Jacques Villeneuve made a poor start dropping behind the Jordan's of Ralf Schumacher and Damon Hill. Villeneuve, however managed to regain third from Hill going into turn 3.

Michael Schumacher made a strong start, moving into seventh behind teammate Irvine. Alexander Wurz struggled to get away, dropping down to seventeenth after his car seemed almost immobile getting off his gridbox.  Pedro Diniz then became the first retirement on the second lap with throttle failure. The same lap Irvine then went wide into the gravel allowing teammate Michael Schumacher into sixth position.

Ralf Schumacher then began to close in on the two McLaren's of Häkkinen and Coulthard ahead of him. Olivier Panis was then given a 10 second stop and go penalty due to a jump start.

The Ferrari's failed to make an impact, Schumacher seemingly unable to close the gap to Damon Hill's Jordan in fifth position.

Ralf Schumacher then came into the pits for a very early pit-stop from third position. He exited in ninth place.

Meanwhile up front Coulthard had begun to close the gap down on Häkkinen ahead of him, the Williams of Jacques Villenueve in third was slowly closing on the pair of them.

The following lap Michael Schumacher came into the pits for his stop rejoining in seventh position. The lap after on lap 24 saw Jos Verstappen retire from the race with gearbox failure and Eddie Irvine making his first stop. Irvine exited in eighth behind Fisichella's Benetton.

As this occured, Rubens Barrichello followed his Stewart teammate Verstappen into retire with gearbox failure on lap 27. Behind the McLaren's was Villeneuve and Ralf Schumacher. Schumacher however was forced into the pits for a second stop, his two stop strategy not working out forcing him to drop from fourth to sixth.

Häkkinen and Coulthard continued to squabble for the lead of the race, this battle had allowed Jacques Villeneuve to close up onto the rear of the two McLaren's. The Williams driver was now the fastest driver on the circuit.

Further down, there was a big battle between Fisichella and Irvine, Irvine running wide onto the grass losing time. The next lap Irvine and closed the gap up, however continued to struggle to find a way past the Benetton driver.

In the final laps of the race, Michael Schumacher was lapping the fastest as he attempted to catch Hill's Jordan ahead of him. The Ferrari driver got stuck in traffic and lost time, Schumacher being unable to catch Hill before the end.

Mika Häkkinen went and took the race win, marginally ahead of teammate David Coulthard. Jacques Villeneve was third, taking Williams's first podium of the season. Damon Hill took his first points of the season with his fourth place, Michael Schumacher took a disappointing fifth place ahead of brother Ralf who rounded out a double points finish for Jordan.