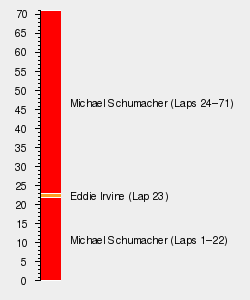 The 1998 French Grand Prix, officially known as the LXXXIV Grand Prix Mobil 1 de France, was the eighth round of the 1998 Formula One Season. The race was won by Ferrari with Michael Schumacher and Eddie Irvine taking a one-two finish for the team, the team's first since the 1990 Spanish Grand Prix.

The biggest news heading into the French Grand Prix was that Jan Magnussen would be replaced for the rest of the season at Stewart by Benetton test driver Jos Verstappen. Verstappen who had failed to attain a drive at the beginning of 1998, had been linked as a replacement by the underperforming Magnussen since as early as San Marino. Despite gaining his first F1 points in Canada, it would not be enough to convince Stewart to retain Magnussen for the remainder of the season.

There was also news at Tyrrell, it was annouced that its Deputy Technical Director Mike Gascoyne had left the team to join Jordan from the British Grand Prix onwards. Furthermore, its driver Ricardo Rosset was looking to be replaced within the team. Rosset had made a poor impression in Formula One, many questioning his ability to compete after failing to qualify in Spain and Monaco. Rosset was also behind on many of his payments to the Tyrrell team, with team boss Craig Pollock announcing following Canada that it was evaluating Tom Kristensen to race for the team. Rosset, however came good on his payments and therefore was contractually obliged to continue racing for the team despite his unwelcome nature within the Tyrrell camp.

To further confound Tyrrell's misery, it had been announced that Harvey Postlethwaite, the man who had been left in charge of the day to day running of the team following Ken Tyrrell's retirement, had decided to leave the team and join the Honda F1 Project. However good news for the team would occur when Craig Pollock announced that the team would be using Supertec engines for the 1999 season upon its renewal as BAR.

Prior to France, Benetton became the first team to confirm its 1999 line-up with Giancarlo Fisichella and Alexander Wurz impressing substantially to be retained into the coming year.

The full entry list for the 1998 French Grand Prix is outlined below:

The Friday practice sessions saw an increased competition between the Ferrari annd McLaren teams. In fact it was Eddie Irvine who was consistently topping the timesheets, holding his advantage unexpectedly over teammate Michael Schumacher. However in the dying minutes of the session Mika Häkkinen went fastest with a 1:16.515, only half a tenth faster than Irvine. Coulthard was third followed by Frentzen and the two Schumacher brothers of Michael and Ralf.

Michael Schumacher was not at ease in the session complaining of oversteer on his car. The new arrival on the grid, Jos Verstappen struggled on his return to F1 following an oil leak in the morning, he was only able to better the Minardi cars in the session. The only notable incidents in the session was of Jacques Villeneuve and Esteban Tuero spinning off the circuit into the gravel, ending their days.

Ricardo Rosset who recorded a solid fourteenth fastest time saw his car catch alight into flames whilst in the pit-lane.

Mika Häkkinen once again went fastest in Saturday practice, however the two Ferrari's were heavy on his heels. Michael Schumacher went second despite a spin mid-way through the session. David Coulthard who went fourth fastest, also spun into the gravel before he was beached. Ralf Schumacher once again demonstrated a strong time to go fifth for Jordan.

Sauber suffered a torrid session with Johnny Herbert having an engine failure whilst Jean Alesi only managed to complete four laps. Esteban Tuero also had a nasty shunt into the tyre barrier.

The full practice results for the 1998 French Grand Prix are outlined below:

Ralf Schumacher in the Jordan was the first person out on track setting a lap time to take provisional pole. Jean Alesi then came round but was unable to better the Jordan's time, setting a relatively slow time.

Michael Schumacher then came round to take provisional pole despite going wide through the chicanes and being held up by a Minardi. Giancarlo Fisichella then set a time to go second, ahead of Ralf Schumacher. Eddie Irvine then came round to set the provisional pole time. Olivier Panis then suffered a mechanical failure forcing him to return to the pits to compete in the spare car.

Michael Schumacher, meanwhile came round to complete his first true flying lap to go second fastest one tenth slower than Häkkinen. Irvine then improved his time to take third ahead of Coulthard.

Toranosuke Takagi then suffered a major engine blow out down the second straight. Villeneuve then improved to go fifth fastest whilst Hill then went sixth fastest. Häkkinen then went round to go 0.2 seconds faster with a 1:15.253 despite running wide onto the grass during his lap. Coulthard then came round for his next lap but whilst he went faster than Irvine, he was unable to top Häkkinen or Schumacher.

Michael Schumacher then went on to set the fastest provisional time with a 1:15.159. Pedro Diniz then spun off the circuit coming out of the first corner and ending into the barriers. Diniz ran back to the pits for the spare car however was unable to resume the session as teammate Mika Salo had already occupied it.

Irvine then experienced problems when exitting the pits, his car lost power and had to be wheeled back into the garage by his mechanics. Häkkinen meanwhile came round to reclaim pole position with a 1:14.929. Coulthard also appeared to be on a quick lap, however ran wide whilst entering the final sector ruining his lap.

The dying minutes saw the two McLaren's of Häkkinen and Coulthard as well as Schumacher's Ferrari enter the track in a final bid to improve their time. None of the three would improve their times meaning Häkkinen would take his fifth pole position of the season.

The full qualifying results for the 1998 French Grand Prix are outlined below:

The full grid for the 1998 French Grand Prix is shown below:

It was a good start for the McLaren's, Häkkinen maintaining his lead into the first corner ahead of Michael Schumacher, whilst David Coulthard climbed to second ahead of Eddie Irvine. However, the start was aborted due to Jos Verstappen on his return to racing stalled on the grid, being forced to start from the back of the grid on the second re-start.

The second start was disaster for McLaren, Schumacher took the lead as Häkkinen dropped to third behind Eddie Irvine. Coulthard started poorly dropping behind Jacques Villeneuve, however he managed to reclaim the position going into turn 3. Alexander Wurz had made a strong start to climb to eighth position.

Schumacher immediately began to disappear into the lead of the race leaving teammate Irvine to fend off the McLaren attack from behind. Jacques Villeneuve's fifth position also came under threat as the two Jordan cars of Ralf Schumacher and Damon Hill began to apply the pressure. However Hill would encounter problems on lap 15 with his hydraulics which caused him to drop behind Wurz and Jean Alesi.

Ricardo Rosset became the first retirement on lap 16 when he pulled into the pits with hydraulics failure. On lap 17, Ralf Schumacher became the first of the frontrunners to pit. A lap later teammate Hill came in, however a troublesome pit-stop saw him drop to 13th. He then retired a lap later with hydraulics failure. To make things even worse for Jordan, Wurz and Ralf Schumacher collided, damaging Schumacher's track rod forcing him into the pits. The damage took a number of laps to fix and whilst Schumacher rejoined the race he was several laps down on the leaders.

Meanwhile at the front, Häkkinen continued to apply pressure on Irvine, he attempted to overtake through the inside of the last corner but only succeeded in spinning the car, losing third to Coulthard. Coulthard was then able to overtake Irvine into turn 3 for second, before the Ferrari driver came into the pits for his first stop. A lap later, race leader Schumacher came into the pits allowing Coulthard a brief moment in the lead.

However as Coulthard entered the pits, he suffered a dismal 17 second stop as the mechanics struggled to attach the fuel nossle. He exited back in fourth behind Irvine and Häkkinen.

Whilst chasing down Jean Alesi, Giancarlo Fisichella collided with the back of the Sauber damaging his front wing, causing a replacement to be fitted before his second pit-stop.

The order at the front then stabilised, Schumacher continued to further consolidate his lead as Irvine held the McLaren's at bay from second position. Battles at the back saw Wurz take sixth position away from Jean Alesi, Wurz then began to put pressure on Villeneuve's Williams for fifth yet was unable to find a way past.

In the second round of pit-stops there was trouble yet again for Coulthard. His refuelling rig would once again not attach properly to his car, Coulthard remained stationary in the pits for 37 seconds exiting in fifth behind Villeneuve without receiving any fuel. The following lap Coulthard returned to the pits, after another lengthy pit-stop, the mechanics finally began refuelling Coulthard. The McLaren driver then exited in eighth position. He quickly disposed of Heinz-Harald Frentzen's Williams on his out-lap.

Esteban Tuero then retired from the race with gearbox issues. Coulthard, meanwhile was the fastest car on circuit, quickly catching up to Alesi's Sauber before overtaking him to get back into the points.

Johnny Herbert had a wild moment going into the first chicane, he went off the circuit and into the gravel then bounced back into the track, nearly causing an accident with Jarno Trulli. Despite just missing out on accident, Trulli would spin out of the race on lap 55.

At the front Schumacher consolidated his lead whilst Irvine came under serious pressure from Häkkinen. Coulthard, who set the fastest lap on lap 59 had just managed to overtake Wurz and set on hunting down Villeneuve, when he was called to the pits yet again for more fuel. This dropped Coulthard back down to eighth.

Häkkinen came close many times to overtaking Irvine but to no avail, he was held up in one of his attempts by the backmarker Stewart car of Jos Verstappen. In the dying laps, Toranosuke Takagi and Shinji Nakano both retired with engine failures.

Lap 68 saw Heinz-Harald Frentzen climb to the rear of Jean Alesi, attempting an overtake the two cars collided. Alesi continued, however Frentzen pulled into the pits, his crippled car retiring with suspension damage. The collision allowed Coulthard to close on the rear of Alesi, before going for the overtake and taking sixth position, salvaging some points.

Schumacher, however would take a dominant race win. Häkkinen attempted one final overtake manoeveure on the last corner of the last lap, but Irvine maintained second. Villeneuve was fourth with Wurz right behind while Coulthard could only manage a single point in sixth.

The Ferrari 1-2 was the first for the team since the 1990 Spanish Grand Prix.

The full results for the 1998 French Grand Prix are outlined below: