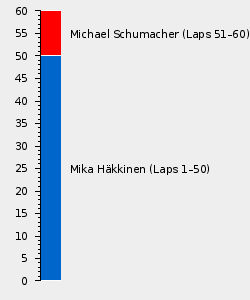 The 1998 British Grand Prix, officially known as the LI RAC British Grand Prix, was the ninth round of the 1998 Formula One World Championship, it held significance as being the first race that has been won by a driver from the pit-lane. Michael Schumacher took the race win when he came in to serve a drive-through penalty on the final lap of the race for overtaking under safety car conditions. Championship leader Mika Häkkinen was second with Eddie Irvine in the second Ferrari, third.

Retrieved from "https://f1.fandom.com/wiki/1998_British_Grand_Prix?oldid=90561"
Community content is available under CC-BY-SA unless otherwise noted.