Formula 1 Wiki
Register
Don't have an account?
Sign In
Advertisement
in: British Grand Prix, 1998 Grands Prix, Formula One races in the United Kingdom 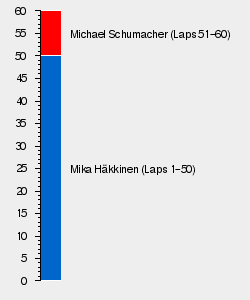 The 1998 British Grand Prix, officially known as the LI RAC British Grand Prix, was the ninth round of the 1998 Formula One World Championship, it held significance as being the first race that has been won by a driver from the pit-lane. Michael Schumacher took the race win when he came in to serve a stop/go penalty on the final lap of the race for overtaking under safety car conditions. Championship leader Mika Häkkinen was second with Eddie Irvine in the second Ferrari, third.

Post-race, there was debate on the last lap drama. Ferrari claimed that they were issued the penalty too late and were unsure which kind of penalty should they serve, a stop/go or post-race time penalty. McLaren however demanded a harsher time penalty equivalent to how long an average stop/go penalty would take. After a meeting, it was decided that no further action was taken. Schumacher's win was allowed to stand while the stewards involved in deciding the penalty had their licenses revoked.

The full results for the 1998 British Grand Prix are outlined below: